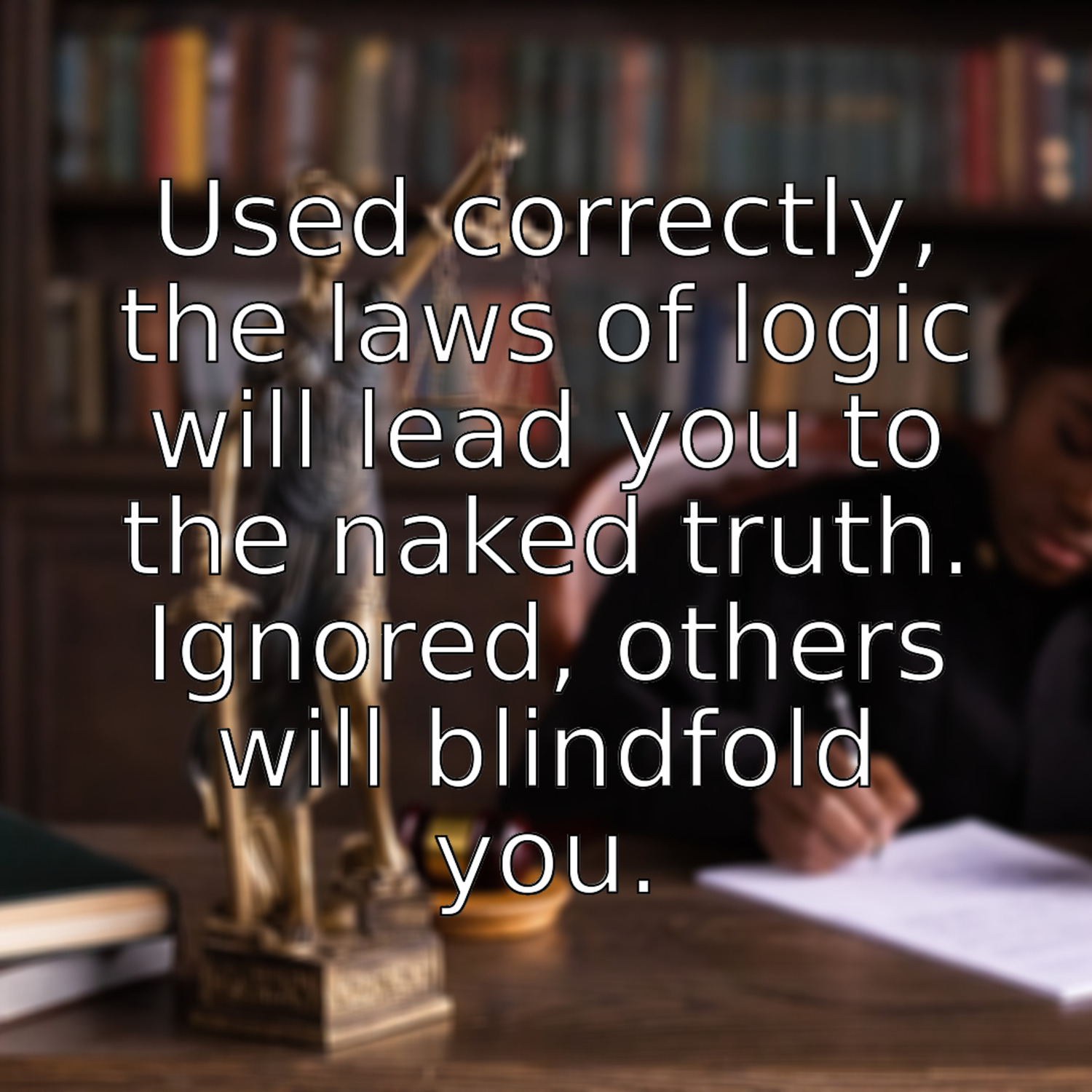 Finally, it’s important to understand logical arguments—especially illogical arguments. This is how you determine the truth and validity of what is being said. We hear these every day but may not pick out their logical flaws. You can think of these as a combination of math and argumentation. There is the conditional statement (X -> Y, true), the converse statement (Y -> X, usually a flaw), the inverse statement (Not X -> Not Y, usually a flaw), and the contrapositive statement (Not Y -> Not X, true). It’s not just word games; it’s understanding the foundations upon which true and misleading arguments are built.

A final element of not trusting your instincts is recognizing how the laws of logic work—or don’t—in what you observe, see, and hear. Used correctly, the laws of logic will lead you to the naked truth. Ignored, others will blindfold you.

Like with cognitive biases, the laws of logic go unnoticed by nature. We rarely dissect statements from a logical perspective, making for habitually sloppy arguments and poor understanding. If something sounds credible, we deem it credible.

There’s a funny, if somewhat cynical, piece of “advice” for people who are a little unsettled about speaking in public: “If you can’t dazzle them with brilliance, baffle them with B.S.” In this context, “B.S.” does not stand for “Bachelor of Science.”

We’ve all been in conversations where we realize that the person we’re speaking with is saying something wrong. For whatever reason, their words don’t add up. No matter, they continue, and it causes a cognitive clog in your brain.

They probably think they’re making sense—they don’t think they’re trying to baffle you with B.S. But on the other hand, maybe they are. They might be trying to convolute your thinking with distorted logic and crazy talk. Whatever the case, you can’t quite put your finger on what’s rubbing you the wrong way, and thus can’t form a rebuttal. They continue to gloat and build their argument on a house of cards.

The problem isn’t with your comprehension or ability to think; it’s the opposite. You’re dealing with someone defying the laws of logic, and while your ears are taking it all in, your brain’s not having any of it. That’s what causes the confusion.

But for the most part, this happens by accident in everyday conversations where the people are well-intentioned. We’ve all done it before. We get caught up in making a firm point, get flustered if we’re not convincing enough, and end up making statements that don’t seem to make any sense because they don’t. We spitball on earlier statements in an attempt to salvage an argument, and hope they aren’t picked apart.

It’s beneficial to understand the basic nature of logical thinking and construction. In the world we live, it’s a crucial mental skill to develop. It helps us ferret out the truth and process problems. It imparts the ability to parse arguments and statements and know if they need to be dealt with. This is one of Aristotle’s main legacies to the world.

As a quick example, a friend may be trying to remember the shoes they were wearing a particular day. They say, “If I was wearing sandals, they were red.” So far, so good. They go on to say, “I’m pretty sure my shoes were red, which means I was wearing sandals.” Well, that second part doesn’t follow—hopefully, an alarm has been set off in your brain. It doesn’t logically add up, and you’re about to learn why.

Dissecting logical arguments sounds complicated, but the foundation of logical thinking is pretty easy to understand. The concepts are straightforward. They use sentence structure and equations to illustrate how arguments are or are not sound at their core. Understanding them breaks down to assessing the distinct kinds of statements people make in explaining a concept or an argument. Here, we will go over four of the most often used laws of logical statements—two of which are illogical!

Conditional statements: X -> Y. The first of our so-called laws of logic is the conditional statement. It is simply a true statement to be taken at face value. We’ll use a conditional statement as the core example for all these arguments— “If you feed my dog kibbles, then he’ll be friendly to you.” To make things easy to understand, let’s assume in this discussion that this statement is always true. There is a causal relationship.

This is called a conditional statement because it says, “If this condition is met, then this result will one hundred percent happen.” The condition is your feeding your friend’s dog kibbles. The result is that the dog will be friendly to you. There is a direct cause and effect relationship between the condition and the result, and it only functions in one direction—there has been no cause and effect relationship established backward.

Once again, we’re pretending this will always be the case—every time you give this dog a kibble, he’s going to love you. Using this as a given, the statement is logically sound.

We also call the relationship between the condition and the result one of premise and conclusion—broader terms that can be used for other statements. If a particular premise is true, you can expect the conclusion or outcome to be true.

These types of statements generally don’t present as issues unless someone is trying to pass off that the conclusion will always be true when it isn’t. It’s when you start to play with it that problems arise.

Converse statements: Y -> X. Now, consider this statement: “If my dog is friendly to you, it is because you fed him kibbles.”

Is this true, given what we learned about conditional statements? If “If you feed my dog kibbles, then he’ll be friendly to you” (X -> Y) is true, does that mean the reverse is necessarily true? Well—it’s certainly a possibility, since we’ve determined that feeding the dog kibbles is a surefire way to win his friendliness. But is it the only way to make the dog friendly? Maybe you petted him. Perhaps you spoke to him in a gentle, friendly tone of voice. Perhaps you played a game of fetch with him that made him extremely happy, and he returned his happiness with intense affection to you. Maybe the dog is in a good mood. Dogs do that.

In short, no, Y -> X is often a flawed argument—an illogical statement.

This is an example of a converse statement: it reverses the conclusion and the premise, or the result and the condition—it says that the prerequisite is true if the result is true. And it’s turned the statement into a logical flaw. Feeding the dog kibbles will indeed make him your friend. But there’s no indication that he’s friends with you strictly because you fed him kibbles. There are other ways you can make a dog friendly to you. You’ve just caught someone with their hand in the cookie jar. Remember, a statement only has cause and effect in one direction—from condition to result, and not the other way around.

A converse statement is the direct parent of something called the false syllogism—basically, a false premise. Its fallacy is also exposed in making leaps of judgment based on misunderstood connections, like this:

In this statement, the two premises might be true. But the fact that both dogs and monkeys like kibbles doesn’t mean they’re the same thing. The premise used for establishing the conclusion—mutual kibble love—is therefore false, as is the conclusion. Converse statements are where you’ll catch people the most, because the cause and effect relationship isn’t always closely examined.

Inverse statements: Not X -> Not Y. Okay, let’s try this one on for size: “If you don’t feed my dog kibbles, then he won’t be friendly to you.”

Really? That’s the dog you have? If I don’t feed him kibbles—if I’ve run out or, you know, just don’t carry kibbles on me out of habit—then he’s going to turn on me? What an ingrate.

This is an inverse statement. It preserves the premise-conclusion relationship of the original statement but turns it into a negative: “If this doesn’t happen, then this won’t happen as a result.” It assumes a deeper relationship between the two than exists.

Inverse statements are trickier because not all of them are wrong. Sometimes they’re right: “If you don’t brush your teeth, then they won’t be healthy.” Well, that’s true. But it leaves out that there are other ways to make your teeth unhealthy—constantly eating food that’s bad for your teeth, for example (even if you do brush).

It could very well be that the dog rejects all who do not bring him kibbles. I don’t know this particular dog’s neurosis when it comes to being fed kibbles at the appropriate time; I suppose it may turn him into a hostile, nervous wreck.

Still, the dog may be unfriendly for other reasons. Maybe he just got back from chasing a car he didn’t catch, so he’s a little disappointed. Maybe he’s in a bad mood. Maybe you’ve insulted him. Maybe he was recently neutered. There are plenty of things that can tick this dog off besides kibble deprivation.

So, while certain inverse statements might be right, not all of them will be. Be extra cautious with them, and don’t take them at face value. Many things will try to pass themselves off as true statements, but you can begin to see that most of them are logical flaws.

Contrapositive statements: Not Y -> Not X. These are statements that negate both the premise and the conclusion, both backward and forward. If the original conditional statement is correct, then the contrapositive is also always true, unlike the converse or inverse statements. This type of relationship exists both ways, because it’s about a negative.

In our trusty dog food analogy, the conditional is “If you give the dog kibbles, then he will be friendly,” and the contrapositive would be “If my dog is unfriendly to you, then you didn’t give him kibbles.” This is true. This is always true. There could be many reasons why the dog is being a jerk (see above). But one thing’s for sure: if he’s unfriendly, then for sure you haven’t given him any of his cure-all kibbles. If you did, the dog would be more agreeable. But he isn’t, so you haven’t. Remember, that part is a given, so if the result is not true, then the given is also not true.

Another quick example: if you go swimming, you will be wet. What does the contrapositive statement sound like? If you are not wet, you did not go swimming. That certainly seems to make sense.

It can take a bit to decipher these types of logical statements, but once you do, you’ll find that you can understand the truth of matters instantly. Our instincts make us want to skip over the details of these statements because they make sense on the surface. It’s almost as if our instincts are working against us these days!