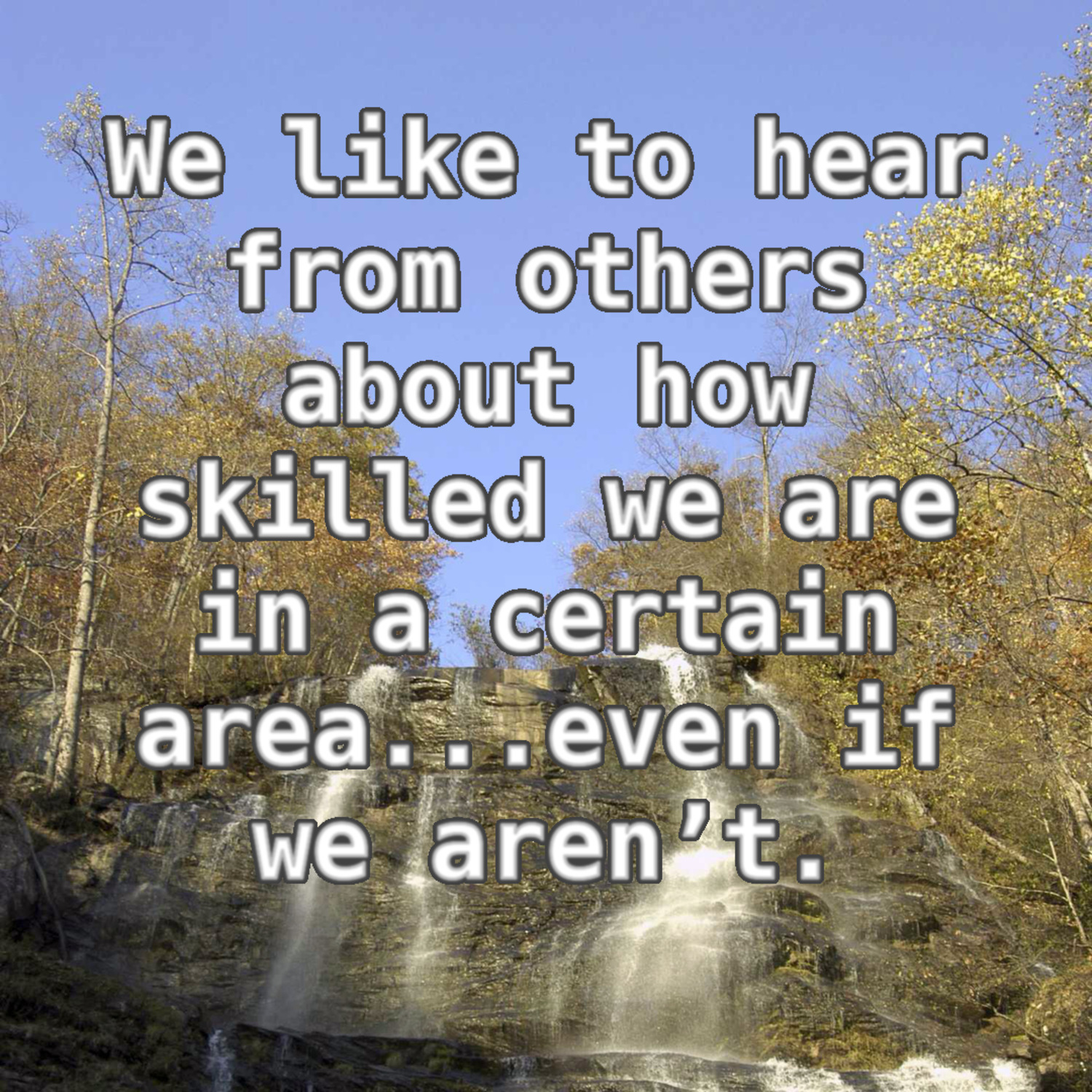 For every negative trait a person sees in him/herself, the key is for you to be accepting and considerate. Occasionally, you may run across a situation where someone’s self-perception varies vastly from their reality. In these instances, it’s worth asking yourself what your overall goal is—to be better socially, or to burst someone’s bubble. The answer to this question may guide your actions.

The theory states that humans all desire to confirm our self-views and are naturally inclined to like people who help us do so, regardless of whether our views are positive or negative. Moreover, this desire to verify what we believe about ourselves is so powerful that it can actually override the desire for social approval and praise. We like to hear from others about how skilled we are in a certain area, even if we aren’t, because it verifies a belief of ours. It makes us feel good, self-aware, and like we are succeeding in how we wish to represent ourselves.

For people with high self-esteem and generally positive self-views, the theory makes intuitive sense. It’s not surprising that people who believe that they are lovable, competent, and worthy would also desire for others to see them in a similarly positive way.

The theory becomes much more interesting, though, in the case of individuals with negative self-views, low self-esteem, or depressive symptoms. These people don’t view themselves as particularly likable, lovable, competent, or worthy, so you might intuitively think that they would be highly motivated to seek out positive feedback in order to boost their self-image. But in fact, self-verification theory actually argues the opposite. Instead of compliments that make them feel better, these individuals prefer for others to see them in an equally unfavorable way as they see themselves.

We just want other people’s views of us to be aligned with our own, regardless of the circumstances of our self-views. Even when our self-views are negative and therefore conflicting with our desire to maintain a positive image of ourselves, self-verification overrides that desire and is the stronger factor at play in how we feel about what others say about us. We want a sense of consistency—it’s actually a bit scary and uncomfortable to think about how we might feel if we were to discover that someone sees us completely differently from how we see ourselves.

In this case, and perhaps others, the highest-valued views in our minds are those that allow us the greatest amount of self-verification. If you’re somebody who’s known as intelligent, or funny, or entertaining, complimenting other people on those same positive personality traits that you possess can make your praise all the more impactful. You might feel more accomplished if you can make a comedian laugh as opposed to anybody else, and you may even like the comedian more because of it.

Know what someone prides themselves on and let them know you appreciate that about them. Likewise, agree with them on their self-assessments and make it clear that you speak that same language. When someone doesn’t agree with our beliefs about ourselves, well, it’s hard to feel like they have the same values and worldview, isn’t it?

At this point, you might be wondering why the self-verification theory is true. What is it about verifying our self-views that we appreciate so much, it’s better than having other people view us as positively as possible?

The theory suggests that our reason for preferring self-verification comes down to control. We live in a chaotic world, and getting consistency between our opinions of ourselves and the feedback we receive from others engenders some sense of control in our lives. We can anticipate how others will treat us, think of us, and behave around us. Having a good idea of what to expect, even when it’s negative, means that we aren’t surprised in social situations, and thus we feel that we are in control. Moreover, when others verify our self-views, it gives us the impression that we know ourselves well, which also makes us feel better.

So if self-verification is all about control, what happens when we can’t control the kinds of feedback we receive?

The desire for self-verification is a real and important factor in how we perceive each other in social situations. The question then is, what you can do with this knowledge to achieve more social success?

First and foremost, pay attention to how people are trying to present themselves and then help them to verify that self-image. For example, if you have a friend who often wears unorthodox and extremely colorful outfits, you could tell that friend that you see them as a unique and expressive person. Simply make it known that you see the image that they are trying to cultivate. In other words, be a supportive friend.

Make it a policy to agree with people on their traits—strengths as well as weaknesses. Even when they have character traits that are rather obvious, you can say things like “I bet you like/want…” according to whatever those traits may be, and that will likely make them see you more favorably. If you want to boost somebody’s self-image, don’t just give them an insincere compliment. People are trying to accomplish something specific, so recognize and validate them.

For every negative trait a person sees in him/herself, the key is for you to be accepting and considerate. Occasionally, you may run across a situation where someone’s self-perception varies vastly from their reality. In these instances, it’s worth asking yourself what your overall goal is—to be better socially, or to burst someone’s bubble. The answer to this question may guide your actions.

When it comes to yourself, notice how you respond to various types of feedback as it relates to your self-views. If greater self-awareness and an accurate self-image are important to you, then recognizing that natural tendency to feel anxious and reject anything that contradicts your existing views of yourself may help you learn something new.

As we will learn next, our inclination to stick with others who affirm how we view ourselves plays a role in the way we tend to form groups. More than the affirmation, we also seek commonalities between one another as the latter, more often than not, precludes the first. This creates for us a dynamic that binds people into different groups.