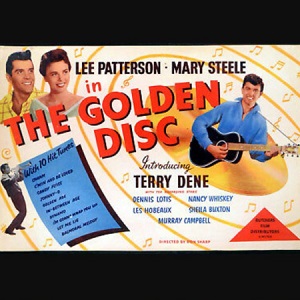 Just for the record.

The theme of episode 25 is record shops. Soho was, for a long time (and arguably still is?) THE place to go to buy records of all genres with dozens of shops packed closely together. In the first half of the show, Dom talks to Garth Cartwright, the author of two books about record shops, about the history of the Soho record shop scene.

Kenny Lynch in Soho, including his shop, The Kenny Lynch Record Centre on Walker’s Court

In the second half of the show. Ken Hollings talks about the 1958 B Movie, The Golden Disc – known in the US as The In Between Age. Starring Lee Patterson as Harry, Mary Steele as Joan and Terry Dene as Terry Dene, it’s a tale of Exceptional Success as our heroes take a failing greasy spoon cafe and turn it first into a groovy coffee bar, then a record shop and finally a record label.

Here’s a short biography of Terry Dene and he has a YouTube channel!

Renown Films (otherwise knows as the great Talking Pictures TV) have a CD for sale of Terry’s music. You can buy your copy HERE

There’s a great website called The British Record Shop Archive on which you can read about some of the shops and characters mentioned by Garth including Alex Strickland, Harlequin Records, Dobells and Collets.

And have a look at this map of Soho record shops.

Ken Hollings has a blog and of course he’s on Twitter.

Read Ken’s essay on the The Golden Disc and the concept of Exceptional Success.

Discover some of the locations in The Golden Disc (apart from the scenes shot in Walton Studios) on Reelstreets.