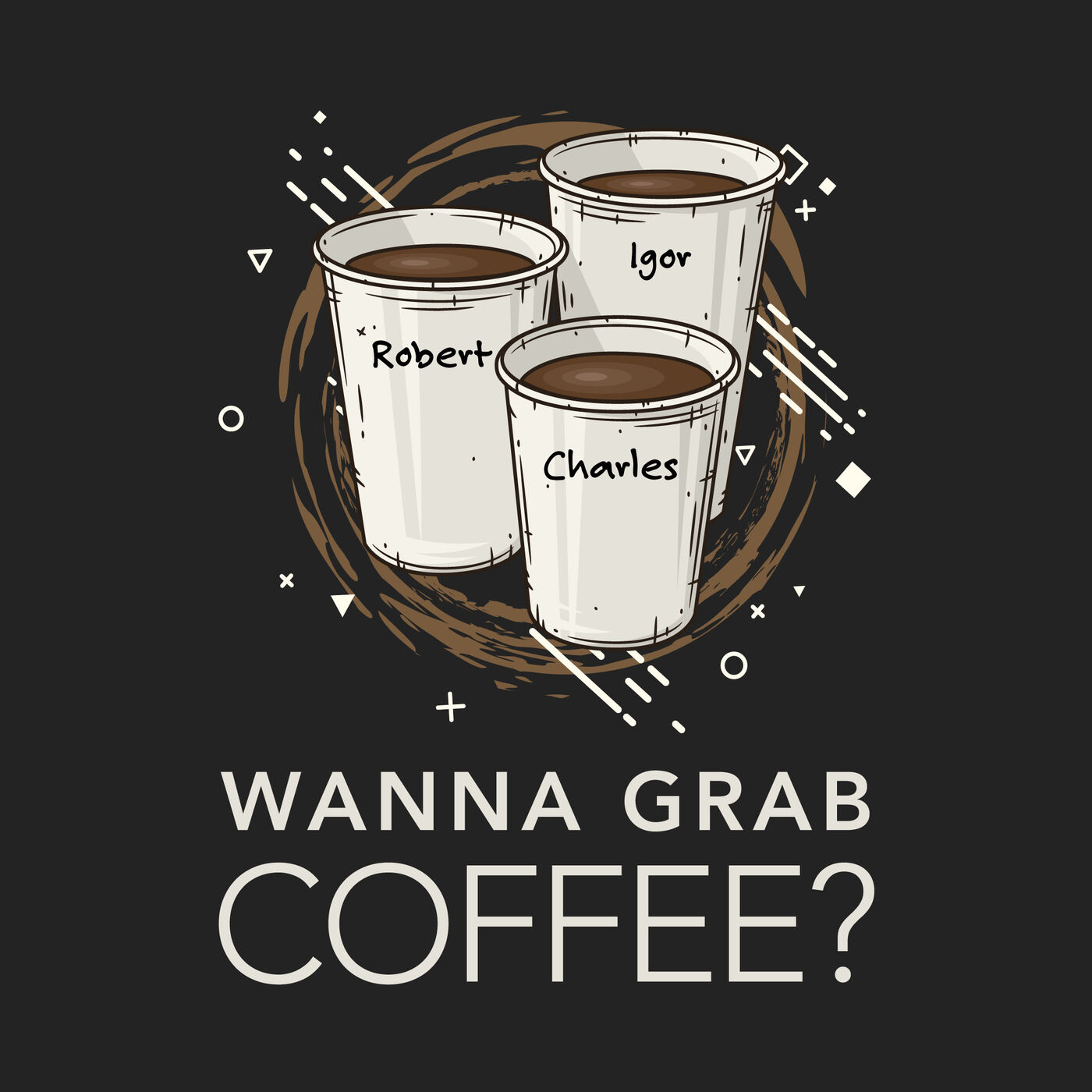 Charles, Igor, and Robert continue the discussion on taking intentional downtime to increase our physical, mental, and relationship wellbeing during times of crisis.

We also discuss the idea of creating a Trip Report to share with our team when we return.

The Trip Report was made famous by Bill Campbell, in the Trillion Dollar Coach when he suggested the Management Team at Google share details of their travels in order to build trust across the team.

Thanks for joining us today and we'd love to hear from you so please drop us a comment on your social media platform of choice.

You can also view the live recording of this episode here.

Welcome to the Wanna Grab Coffee podcast. In today's episode, Charles, Igor, and I continue the discussion on taking intentional downtime to increase our physical, mental and relationship well being during times of crisis. We also discussed the idea of creating a trip report to share with our team when we return. The trip report was made famous by Bill Campbell and the trillion dollar coach when he suggested the management team at Google share the details of their travels in order to build trust across the team. Thanks for joining us today. And we'd love to hear from you. So please drop us a comment on your social media platform of choice.

All right. Yeah. So you know, we've been talking about taking time off and how, for me a lot of taking time off is somehow connected to travel. And about, I would say about a year ago at this point, one of the things that I was reading at the time was Bill Campbell's book, Trillion Dollar Coach. One of the biggest things that I got out of that book is this idea of a trip report. Right? So Bill Campbell, when one of his executives that he was coaching would come back from a trip, he would ask him to do a trip report, just a series of slides and photos and those sort of things. And so as I read that, one of the things that I did as I was coming back from a trip that I took that summer to Spain and Portugal, was I put together my own trip report, and I don't know, Robert, Charles, were y'all there when I did that trip report for the management team?

And so I did that trip report for the management team. And it was kind of fun for me to put together and to share and kind of people were like, oh, I love Spain, or that langoustine looks really good or, whatever it is, and it's just a fun way to to really connect. Right? And it's also something that as I was working with my team, it's something that I started to encourage With my team, and when somebody would take a trip, I would really ask them, Hey, can you spend some time put together a trip report. And we had these things called What's Up Wednesdays when the entire team would meet every week. And during a part of What's Up Wednesdays, the person who had just gone on a trip, but we'll come back and sort of show some slides and I think Charles, you got to view one of these What's Up Wednesdays too, when one of the team members told us about her trip to those like Hogwarts world, right. And so it's really cool, sort of deal. And as we were talking earlier, about, taking time off and connecting things to travel, you know, the trip report is very much like a travel sort of thing. And the question also came up, what can you as a leader do, to, you know, encourage both yourself and your team to take some of that time off. And, as I started reflecting back on that question, You know, why can't we do a trip report, but there's no trip. And so, what I'm going to challenge myself to do, I've got some time off coming up, Labor Day week. So you know, that Monday we have off, I'm taking Tuesday through Friday off, I'm going to put together a trip, in quotes report for all the stuff that I did. And, you know, and it might be full of mundane things, like, making this cup of coffee, right and going for a bike ride, but I'm going to kind of, have fun with it. And show that, it's, it's cool to take this time off and, and show that to the team. And also encourage the team to create their own quote, unquote, trip reports, right, as they as they take time off, even though you're not showing something, you know, some amazing photo of a bridge, you know, in Morocco or whatever, right? You're showing a photo of you're amazing dog that you played fetch with for for an hour or the time you spent with your kids and like learning together, right? So that's what I'm challenging myself to do. That's gonna be my little technique. And I wanted to get your feedback on that, like, how do you feel about doing something like that?

Yeah, I really like that idea. One, I'm a big fan of the idea of the trip report anyway, because it is a way for a leadership group, a peer group to build trust and get to know each other, right? you're sharing information outside of your day to day work. Everyone has more context into your life. And it's a it's a great way to build camaraderie within a peer group. So I would encourage you to do the same thing with with your peer group as well. And then second, yeah, to show hey, this is my life here. This here are the things I'm doing. It wasn't that interesting, but you can kind of make it funny. Be a little bit self deprecating about it. I think yeah, it would really kind of show Hey, and acknowledge we're in. Normally I would be in Portugal right now, or I'd be in Greece. But now I'm at home and here's the stuff I did at home, I think would, would be really good. And then if you sort of capped it off at the end with, and the one thing I really wanted to make sure I did on my trip, that wasn't a trip was x. And I did it. And so you kind of culminate on that. That that one thing, that important thing that you did well, while you were out, I think it's good. Maybe a little mental check. This is how I was feeling before I left this is how I was feeling when I got back. It was a good investment of my time off which is finite. And I feel like I'm in a better space or not when you return. So yeah, I love it, man. I can't wait to see it.

I really liked the idea, Igor. It made me think about the importance of, well, one of the benefits of planning these trips, you know, these infrequent getaway trips to other countries, other cities, is that there's a lot of joy in planning for it. And once it's planned, there's excitement as the anticipation builds leading up to it, and then there's the experience of itself, which is nice. And then after the fact, you have all the memories, and hopefully pictures of your experiences on that trip that you can then look back on to kind of further multiply the joy. I really, really liked the idea of doing that at a micro scale. I was just sitting here thinking about, wow, that would actually make me plan my weekends. A little bit. You know, what is that one thing that I want to say that I have accomplished this weekend, whether it's cooking a new meal, or going on a walk with my kids down a new path in the neighborhood, or recently, I started to just try to take more pictures. I've got like an old DSLR that that kind of gives that time, more purpose and I love it. I think it gives it purpose, something to look forward to. And then once you're done, you can share it with others to kind of share the benefits. I think it's a phenomenal idea. Thank you for that.

Now, I'm really excited. I'm excited to try it out with the team and see if it helps others make progress and encourages them to, create their own, like trip reports. And, you know, I'm like really looking forward because I'm an expert at my life. And my life might seem boring to me. But other people's lives are actually very interesting, right. And I think things like reality TV and stuff like that has really shown that to us. And so I think just we might underestimate, you know, just how interesting our lives may be to other people, especially as a way to connect. So I'll be curious to see what the reaction is from y'all and from the team, and I'll probably end up doing it both for the management team, so kind of my peers and then also for for the team that I'm leading, and maybe you can post it online. And you know people can check out what what a Igor's boring life trip report looks like for labor day week.

Well, you're anything but boring. So, yeah, I'm really excited about it.

Alright, have a good day.

Have a good one.

That's it everyone. Thanks for joining. Have a good one.