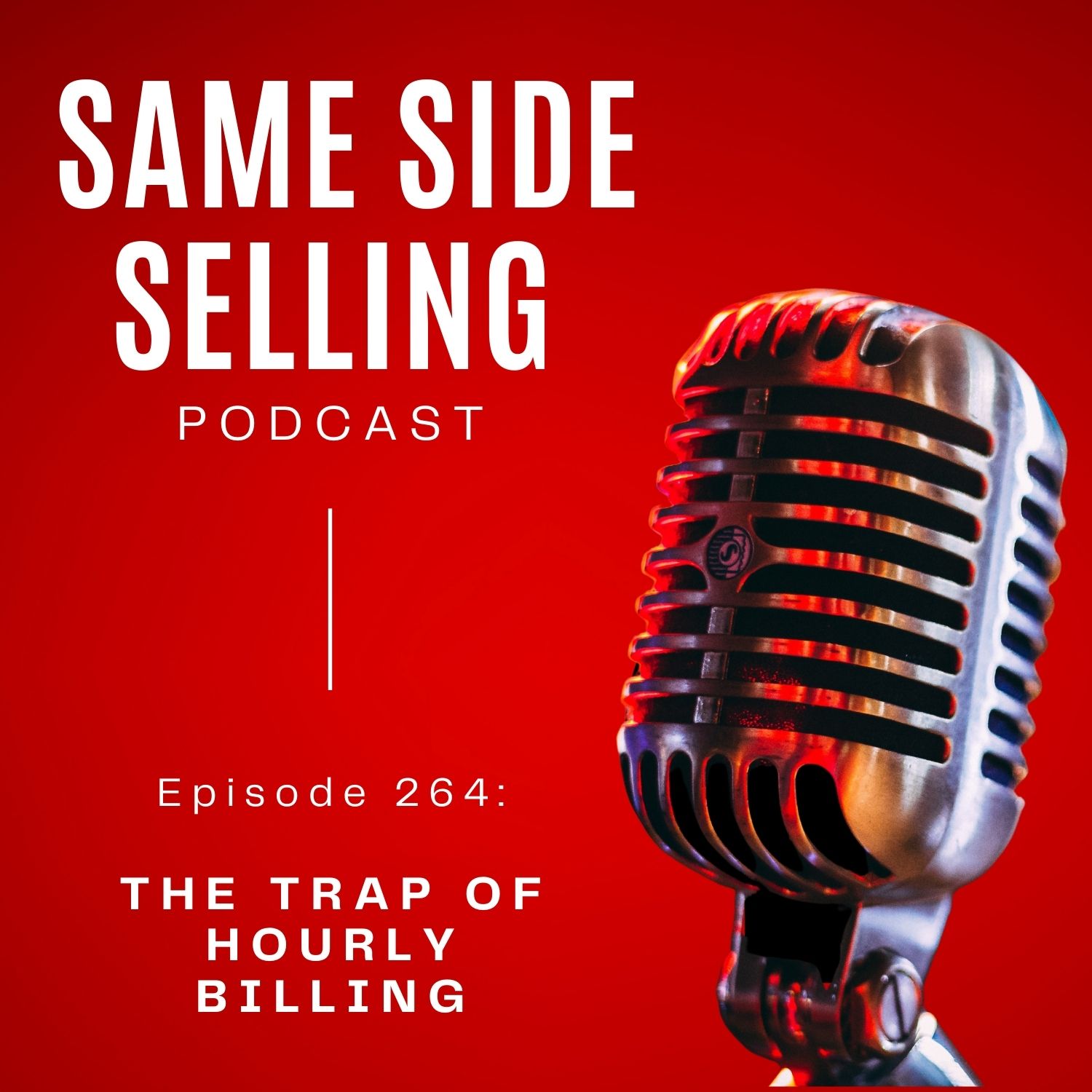 Welcome to the Same Side Selling podcast. I'm your host, Ian Altman.

Today's episode is time and materials/hourly billing versus fixed price billing. Which one is right for your business?

What I'd like you to think about is this, when you charge by the hour are you selling results or resources?

See, if you charge by the hour, what you're doing with your client is saying, I don't know how much effort this is going to take, so I'm going to charge you for my time and my people's time based on an hourly rate. This means you, as the client, are absorbing the risk for this opportunity. This means I can generally charge some multiple of what it actually costs me for that and not more.

Now, some organizations fall into the trap of something really dangerous -- probably the worst contract type you can possibly have in business. And that is the contract type that is time and materials not to exceed. What that means is that the client will say to you, for example, well, we don't want to take all this risk because we don't know how much it is going to cost. So, we want you to cap this project, let's say at 100 hours. And just for simplicity's sake, we're going to say that you're charging $200 an hour. One hundred hours would be $20,000. Now, if you do the job in fewer hours than they pay you just for those hours you bill, and if the job takes you more than 100 hours, then you max out because you cannot exceed $20,000. So, does that make sense? And when you're in that position, what you're doing and what you're telling your client is, hey, look, if we are more efficient. We do the job in less time, then we're just going to charge you for those hours, but if it takes us more time, then we're going to cut our margins, because we're only going to charge you up to that limit even if it takes us two or three times as much.

What you're doing in that case is you are absorbing the risk by doing it on a fixed fee basis. But you're also getting the upside, if it turns out in your favor. As opposed to if you do time and materials not to exceed, then you're actually locking yourself in where you could never make more than $20,000, you can definitely make less than $20,000, which isn't a good deal for your business.

So, when does time and materials or hourly billing make sense and when doesn't it? If you're in the world of litigation, litigators often charged by the hour, because you could have a really straightforward case. But if the opposing counsel, if the other side is not easy to deal with, it could take you three times as long to do the job, even if you did everything right on your end. So, if there are a great deal of unknowns, if you're not necessarily sure what the level of effort is, then time and materials is a way for you to share the risk with your client. You're giving them an honest assessment of what you think that will take. They're assuming some of the risks that if it takes longer, they're going to pay more. Even if they don't tell you there's a time and materials not to exceed, at a certain level they say we're not going to keep paying you for this.

The reason why it works for a security guard is because it's not like the security guard can charge a premium if nothing happens, or charge more if something does happen. Instead, it's just look I need a person there for this amount of time.

For the babysitter they might charge you by the hour, and you're having to pay by the hour because look, you watch my children for five hours and kept them safe. I'm paying you for the five hours.

But what if a chef charged you by the hour? What if you went to the restaurant and they said, well, look, we're going to charge you by the minute for us to prepare your meal. Well, that'd be crazy because you don't want the resource and the effort of them cooking your meal, you want to pay for the actual meal, and know you're getting what you're looking for.

It's the same thing in business. So, where you have complex opportunities, what I suggest is that you break those types of projects into smaller incremental deliverables that you can do on a fixed fee basis. See, it's much easier to have a conversation with a client that says, we're going to perform this task for you. We're going to get you to this outcome. In exchange for doing that our fee is X dollars. So, someone can make an informed decision and say, is this outcome worth $20,000? Nobody has ever thought to themselves, man, you know, what I really need is I need 12 and a half hours of somebody who's an IT consultant. I need 12 and a half hours of a software developer.

When you bill by the hour, the problem is that you've commoditized yourself, because you're saying, well, I'm just going to expend some effort and you're going to pay for those hours. There's no better way to commoditize yourself, then to reduce everything down to an hourly billing rate. In fact, body shops, as they are commonly referred to in the industry, which is IT companies that sell resources, often will be selling the same resource as their competitors, and the only difference is how much they're marking them up. So, in some cases, it's the exact same human being that they're both presenting to the end customer. They've entirely commoditized themselves. Instead of saying, well, for this project, we're going to have a project manager, we're going to have two developers, and we're going to have a documentation expert, and they're gonna work on your project, and over the course of the quarter, they're going to deliver this functionality for you, and we're going to charge $100,000 to deliver that. Well, now the client just has to decide, is it worth $100,000 for me to get that outcome?

And you might think, well, how's it going to work in a competitive situation? Well, let's say one, one company comes in and says, look, we're going to charge $150 an hour, we believe it's going to take about 200 hours. So, what's that? That's about $30,000. You can come in and say we will do this on a fixed-fee basis, it doesn't matter how long it's going to take. We're going to deliver these specific outcomes for you, these results, this is it's going to look like in the end. We're going to charge $36,000. Now, the client what they have to think is, well, what's the risk that other firm going over? Plus, you're confident enough to bid things on a fixed-fee basis. What it also does is when you start billing things on a fixed-fee basis, it incentivizes efficiency. If you're billing by the hour, you actually are penalized if your team is more innovative. If you come up with more creative ways to get things done more efficiently, you actually lose money. As opposed to an organization that actually gets paid on a fixed-fee basis, they start working together and say how can we do this faster? And think about it this way, is it better for your client to get the results faster or over a longer period of time? So, your client would probably rather get the results faster and if you delivered it faster in a time and materials manner, you might actually get paid less for something more valuable to them.

So, the next time you're looking at business opportunities, and you're thinking, well, maybe we should charge by the hour, if you have no control whatsoever over the other side and you're okay being commoditized then definitely bill by the hour. But if you're confident what you can deliver, if you want to stand out and not compete on purely price and selling a resource, then consider looking at fixed-fee options. And please, by all means, never get sucked into the vortex of evil and bid this notion of time and materials not to exceed. That's the worst deal you can get.

I look forward to having you join me on the next episode of the Same Side Selling podcast. If there are episodes that you'd like me to talk about or topics you'd like me to cover, just drop me a note to Ian@SameSideSelling.com. See you next time.