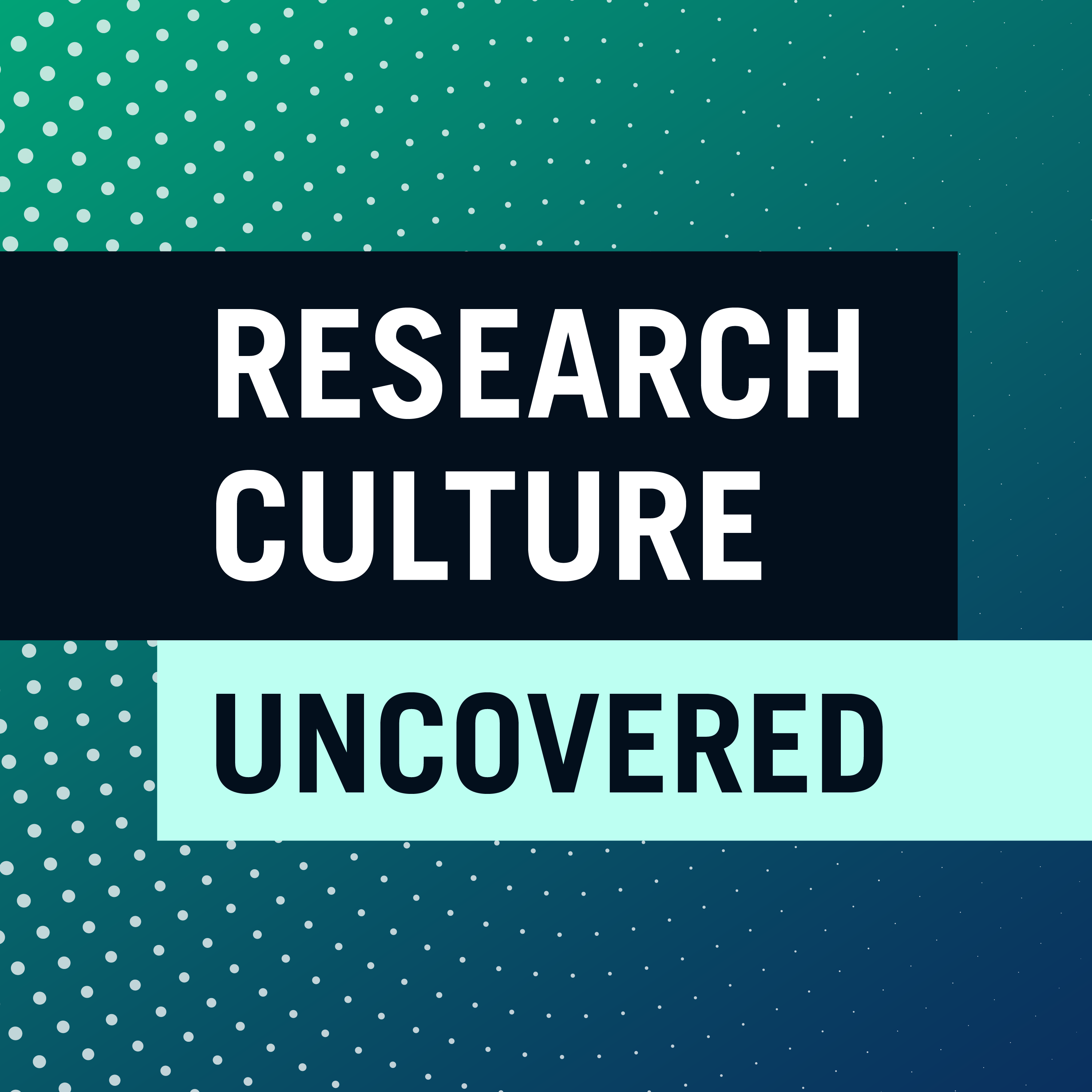 In our weekly Research Culture Uncovered conversations we are asking what is Research Culture and why does it matter? This episode introduces Season 2, where we are in conversation with a number of presenters from the Researcher Education and Development Scholarship International Conference of 2022. In this episode, your host for this season, Tony Bromley, explains the background to the conference and talks you through the 11 podcasts upcoming in the season including the main aspects of research culture that each conversation will cover. Tony will let you know the release date for each podcast in the season so hopefully you can earmark the ones you most want to listen to. The season will cover many aspects of research culture including:

Be sure to check out all the episodes in this season!

If you would like to contribute to a podcast episode get in touch: academicdev@leeds.ac.uk

Welcome to the Research Culture Uncovered podcast, where in every episode we explore what is research culture and what should it be. You'll hear thoughts and opinions from a range of contributors to help you change research culture into what you want it to be.

We have 11 presenters in total who we'll be talking to about a range of research culture aspects that came across from their presentations at the, at the conference. The conference itself had the theme, How do we Stop Losing Talent in Research Careers? Now, just a little bit of context about the conference.

I now want to go on to the episodes for you to expect as we go through the season. We will be releasing one on an a weekly basis. On, on a Wednesday, we, we will release the next podcast episode. So here's the 11 podcasts and see which ones that you want to earmark to listen to. Of course, we'd like you to listen to all of them.

Um, The first one will be on the 23rd of November where we are in conversation with Professor Louise Owusu-Kwarteng, who is at the University of Greenwich, and she was our keynote presenter at the conference. Her conference topic was, 'Our expertise is going to waste reflections on disengagement of women and students from marginalized groups in research activity'. Now.

It was terrific presentation that covered all sorts of aspects of research culture. So of course I would really encourage you to listen to the podcast, but in particular, Louise had three questions that she was trying to address and form the basis of our conversation. So firstly, uh, she was looking at how do we redress the balance to ensure that there is equality in terms of opportunities for research.

Secondly, she questioned, do we need to re-look at what counts as an expert in HE, and also reconsider what is seen as valuable work in this context. And then with regards to students from marginalized groups, how do we reframe the narratives which assume their under attainment? Do initiatives aimed at addressing attainment issues need to go wider and include opportunities for research?

keynote speaker from the REDS: 2022

I'll be talking with Katie Nicoll Baines from the Institute for Academic Development up at the University of Edinburgh. And the the key cultural points that we talk about, research cultural points there are about problems of equality, diversity, and inclusion in the STEM, the science, technology, engineering, and maths, um, careers and subjects and disciplines.

Katie, we'll be talking about the, uh, funded research project she did where they were tackling retain about the retention of precariously employed staff. And this is a real common aspect of research culture across the board at universities and also the aspect of the equality and diversity aspect where the intention was to recruit 50% women and 20% black and minority ethnic fellows as part of this funded, um, tenure track.

Um, research funded program that we will be in discussion with Katie about. So that's the 30th of November, Uh, with Katie, Nicoll Baines from University of Edinburgh. We then move to the 7th of December release and that will be Tanvir Ahmed. And he is from, uh, University of Coventry. An interesting conversation with Tanvir.

He's gone for a really individualized approach about, in terms of retaining talented researchers, and this is an individualized coaching led approach to doing that where you empower people to take ownership of their development and create strategies to be the researchers they want to be. So, um, interesting conversation.

You may be interested in implementing something similar in your own organization. So that's Tanvir Ahmed on the 7th of December. On the um, 14th of December, we, uh, talked to a couple of colleagues from Argentina. Um, and it's about virtual writing groups, but it's about how virtual writing groups can really tackle positively that aspect of research culture, which is very common among particularly doctoral research researchers.

That aspect of loneliness and feeling in isolation during your doctorate. Um, they've been running virtual writing groups for many years and they find that they really do begin to tackle loneliness and isolation in a really positive way. And actually a number of other research culture, um, aspects come out from that.

So that is on the 14th of December. Uh, we're talking to Paula and Laura from, um, Argentina about their virtual writing groups. Then we move to the 21st of December, uh, where I'll be talking to Annamaria Carusi. Um, another interesting project, the particular research culture aspect here, although we cover a nu cover, a number of things, particularly it's the student supervisor relationship.

Uh, and what's really interesting here is Annamaria describes the work. With 23, uh, Wellcome, which is a big research fund in the UK 23 Wellcome funded PhD training programs where the funder didn't just want, um, excellent scientific research as part of the proposals for funding as you'd expect, but they also asked the people in their proposals, um, to make a positive commitment

to research culture and those proposal proposals were also assessed in terms of the research culture aspects and commitments. So a really interesting conversation with Annamarie and her findings on that one. That'll be the 21st of December. Uh, Moving on to 28th of December, we will be talking with Richard Hall from De Montfort University and we'll be talking about decolonizing post-graduate research and it'll be the, what he's learned from the decolonizing prob um, decolonizing project at his institution, De Montfort, but really interesting

again there's a lot of work that has gone on at the undergraduate and postgraduate taught level, but actually the work on decolonizing at the postgraduate research level has, uh, been less, It has been less the case. So, um, really interesting conversation and a much more wide ranging conversation than I personally expected when we started talking about decolonizing.

So it was really enlightening to speak to Richard on that one. So that's the 28th of December, Richard Hall and decolonizing postgraduate research. Then we moved to the 4th of January and I will be speaking with Jawiria Naseem from the University of Birmingham. Um, she's representing, uh, a group of researchers who did this work.

They talked about the academic (un)belonging and the neo-liberal university, and they did a comparative institutional case study of doctoral researchers experiences at two English universities. Um, a really interesting conversation about the neoliberal policy context and also how that conflicts with traditional educational values and how that can contribute negatively to, uh, research culture in, in general.

It also, one aspect that surprised me in that conversation is when you talk about belonging, I, I had this assumption that all postgraduate researchers want a really strong sense of identity and belonging to their institution. But actually you, you can find researchers who have senses of belonging in other aspects of their lives and not necessarily looking for that belonging

aspect within the university context. So a really interesting conversation with Jawiria. And that's the 4th of January. 4th of January when we will be releasing that one. Next we move to the 11th of January, and there's only a few, few of these for me left to describe. This is the eighth one in my list of 11.

Uh, speaking to colleagues from, um, Sweden. So Åsa and Ann, and their title of their presentation at the conference and and what we will be discussing, they said they had a title of 'Screwed from the start. How women perceive opportunities and barriers for building a successful research career'. So in this one, we'll be looking at progression of where women in research careers is our key research culture aspect of this, of this discussion.

We'll be talking about the leaky pipeline and who loses out. It's a really interesting conversation, uh, about the metaphor, leaky pipeline. We'll talk about people leaving the research pipeline, um, and why they leave that pipeline. Reasons can be many reasons, but uninclusive, unhealthy research cultures can be a reason that people leave academia and leave research careers. And we'll be challenging in thinking about what impact this may have on academic research itself and the intended outcomes of, of the research and those who are going benefit from the research.

So that's the leaky pipeline who loses out. We'll be speaking with Kate Jones, Rachel Handforth on the 18th of January. That leaves me with a couple more to tell you about. So the last two, um, firstly 25th of January. Um, this is talking with Sian Vaughan and, 'supporting the jugglers, the challenges and barriers for academics in creative disciplines becoming research active'.

So, It really is common research cultural aspect in academia that people struggle with the demands across teaching and research. In the creative disciplines there's also the possibility to people trying to keep going a professional, creative practice on top of the research and the teaching. So we discuss this, we discuss the barriers, and we discuss how we potentially can support people who are trying to, um, have that three pronged, um, aspects to their career.

So that is the 25th of January. Um, that we'll be talking about that in that podcast. Finally, we speak to Cecile Menard from the 1st of February. That's the release date for this one. And very common, again, research cultural aspect that we'll tackle here, tackle here. It's the long term fixed term contracts for researchers.

So, um, Cecile has done a multi-institutional investigation into the personal and professional circumstances behind the career path of long term researchers. And we could look at recommendations that universities create, research only career progressions, and we'll be discussing the outcomes and thinking around that and the outcomes of the research.

So that's the final episode of season two of the Research Culture Uncovered podcast. And that will be released on first of February. So thank you for listening to this run through of the episodes to expect, and hopefully we've wetted your appetite and I hope there's a number of podcasts that you're looking forward to listening.

Um, to, uh, when we get there and going back to the beginning, we will be releasing the first episode, our keynote speaker, Professor Louise Owusu-Kwarteng, on the 23rd of November. Thank you for listening, and I look forward to you joining us for season two of the podcast Research Culture Uncovered. Thank you.

Thanks for listening to the Research Culture Uncovered podcast. Please subscribe so you never miss out on our brand new episodes. And if you're enjoying the discussions, give us some love by dropping a five star rating and written review as it helps other research culturists find us. And please share with a friend and show them how to subscribe.

Email us at academicdev@leeds.ac.uk. Thanks for listening, and here's to you and your research culture.