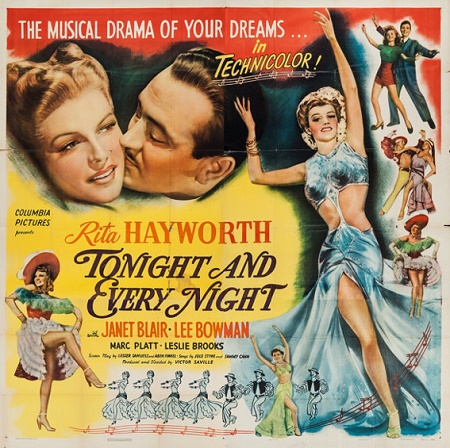 This is the third and final episode in a mini-series about films set at the Windmill Theatre. Adam Roche from the Secret History of Hollywood and Attaboy Clarence podcasts joins us to talk about Tonight and Every Night – a glitzy, Technicolor Rita Hayworth vehicle set at the Windmill. We have now done EVERY film made about the Windmill and that’s enough for any podcast. Listen to the episode to hear the official Soho Bites order of preference. We would have called it a chart but four doesn’t seem to be enough to constitute a chart.

In this scene from the film, Rita Hayworth sings You Excite Me

Marc Platt as Tommy, auditions for Mrs Tolliver at the The Music Box Theatre (ie Mrs Henderson at the Windmill Theatre) including a very strange dance to a speech by Adolph Hitler.

The episode contains the last instalment of our conversation with Jill Millard Shapiro who was a Windmill girl in the late 50s & 60s. She talks about Keith Lester, choreographer at the Windmill and about the theatre’s final days.

Adam Roche’s epic new podcast series about Cary Grant is coming out soon. Find out more HERE and follow him on Twitter HERE.

The founder of Soho Bites, Dr Jingan Young, has launched a new research project. Find out all about it on the Cities in Cinema website and follow the project on Twitter