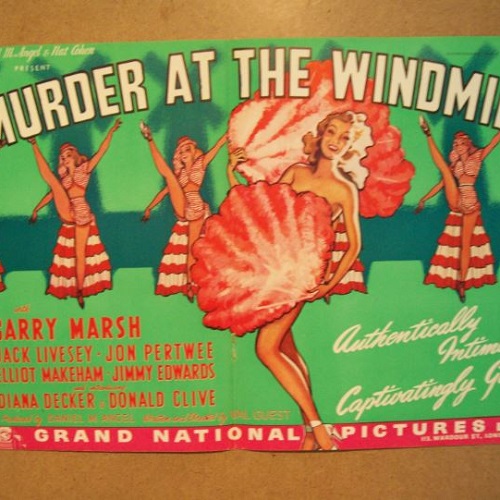 As far as we know (and please do let us know if we have got this wrong) there have been four films made about the Windmill Theatre. Murder at the Windmill was the second of these and is the film under discussion in this, the second instalment of our three-part mini-series about “The Mill”. Dr Ellen Wright of De Montford University joined us to talk about this low budget comedy / musical / thriller from 1949.

The other three Windmill films are Secrets of Windmill Girl (1966) which we talked about in episode four, Mrs Henderson Presents (2005) which was the subject of our last episode and Tonight & Every Night (1945) which is the film we’re talking about in the next episode. We will then have done ALL the Windmill films. Enough already!

Murder at the Windmill is available to view on Archive.org, listed by it’s US name, Mystery at the Burlesque

In this episode we have the second instalment of our conversation with Jill Millard Shapiro who was a Windmill girl in the late 50s & early 60s. She tells us about her time there, how she got her big break, some of the household names who kickstarted their careers on Great Windmill Street and about her Soho film-star boyfriend/not boyfriend.

A 1949 article about Murder at the Windmill

The founder of Soho Bites, Dr Jingan Young, has launched a new research project. Find out all about it on the Cities in Cinema website and follow the project on Twitter.