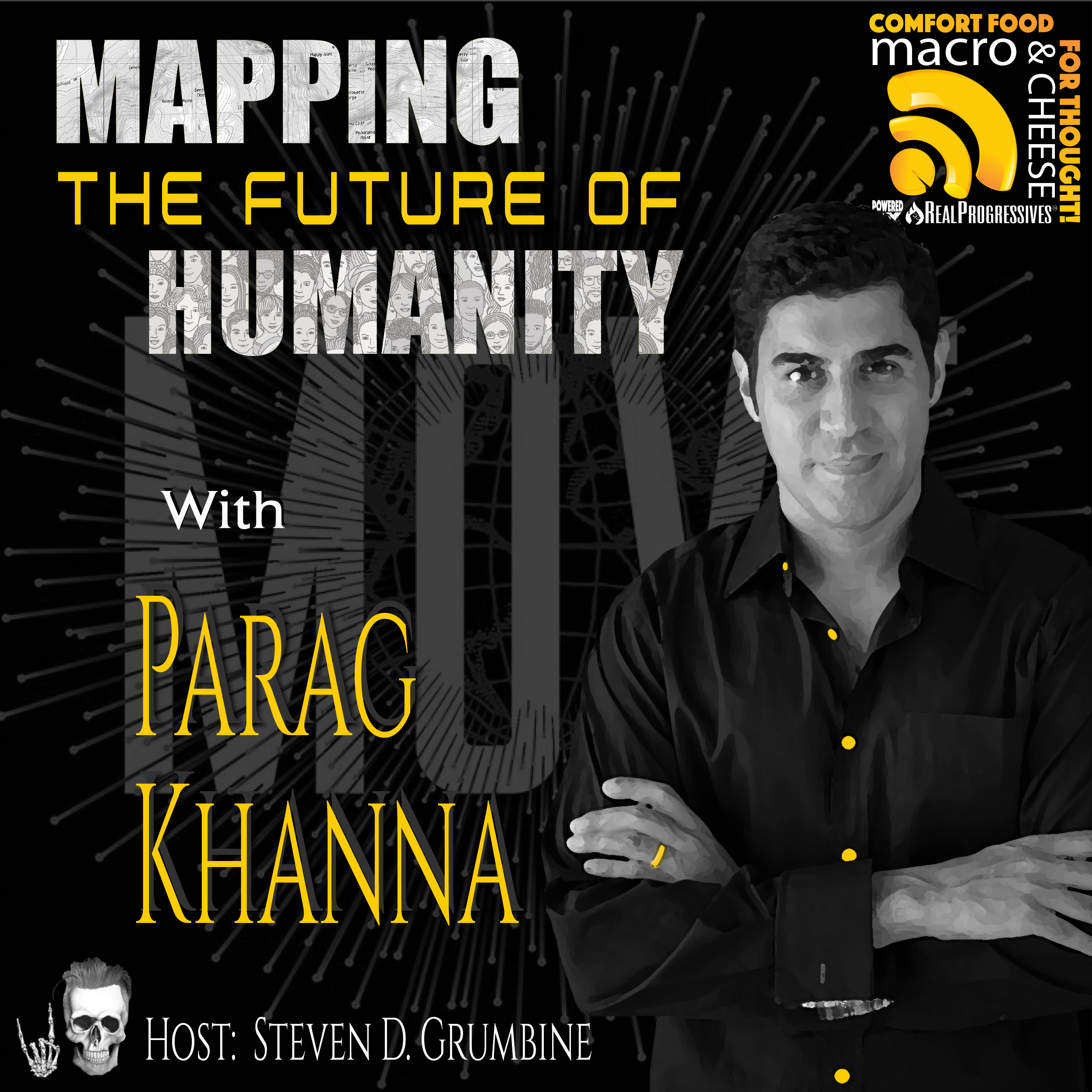 **Reminder** Each episode of Macro N Cheese is accompanied by a transcript and an “Extras” page with links to related material and resources. To access, go to realprogressives.org/macro-n-cheese-podcast.

In one sentence: the winners and losers of the 21st century are the countries that attract young people.

Parag Khanna is a leading global strategy advisor and best-selling author of numerous books on globalization, migration, the info-state, and the future of the world order. In this episode, he speaks with Steve about his newest book, Move: The Forces Uprooting Us.

Most people who pretend to understand globalization reduce it to the rate of world trade growth. Khanna says we need a broader and more nuanced view, even though there are aspects that cannot be quantified. In his work he takes a multi-dimensional and systemic approach.

An earlier book, Connectography: Mapping the Future of Global Civilization, was about the functional geography of infrastructure and supply chains. Its “punchline” is that connectivity is destiny. The recent book, Move, looks at how these ever-greater volumes of infrastructure affect the evolving distribution of population across the world.

Human geography, Khanna explains, answers the questions: Who are we? Where are we? What are we? It is not simply a matter of the number of people inhabiting the planet, but what is our demographic composition - the distribution of age and race?

Most people agree both climate change and economics are global in nature. They know the price of goods in one country can be affected by various phenomena in other parts of the world. Likewise, the impact of climate change is dramatically different from region to region.

Because climate change is so much more extreme and occurring at a much faster pace than we previously acknowledged, it means that adaptation is as important as mitigation. This is a huge theme in the book and, quite frankly, an open door, a big hole that I'm trying to drive a truck through because I'm beside myself with rage.

For all our concern about climate change, the focus is skewed. According to Khanna, only 6% of climate-related funding goes to adaptation.

Meanwhile, people are dying every single day. You got your rising sea levels in Bangladesh and people dying in floods and heat waves, droughts and cyclones -- all these climate related phenomena. Every single day hundreds, if not thousands, of people are dying. The number of climate refugees in the world is greater than any other category of refugees. Climate migration will soon exceed all other drivers of migration, and yet we don't have a collective discourse on adaptation.

Khanna describes the US as “second world,” by which he means it is both first and third world at the same time. He finds lessons in the history of the rise and fall of past civilizations. Societies collapse when their brittleness is exposed by their vulnerability to complex supply chains and structures they haven't fully grasped or untangled.

Parag Khanna is a leading global strategy advisor, world traveler, and best-selling author. He is Founder & Managing Partner of FutureMap, a data and scenario based strategic advisory firm. Parag's newest book is MOVE: The Forces Uprooting Us (2021), which was preceded by The Future is Asian: Commerce, Conflict & Culture in the 21st Century (2019). He is author of a trilogy of books on the future of world order beginning with The Second World: Empires and Influence in the New Global Order (2008), followed by How to Run the World: Charting a Course to the Next Renaissance (2011), and concluding with Connectography: Mapping the Future of Global Civilization (2016). He is also the author of Technocracy in America: Rise of the Info-State (2017) and co-author of Hybrid Reality: Thriving in the Emerging Human-Technology Civilization (2012).