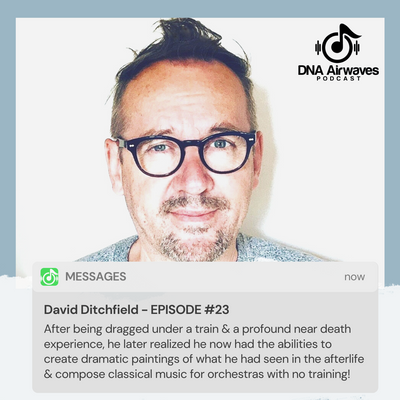 David Ditchfield: From a traumatic near death experience to artist & composer

On today's episode we talk with author and composer, David Ditchfield. In 2006, David had a near death experience (NDE) while being dragged under a speeding train in a freak accident. While doctors grappled to' save his life, he re-emerged with some incredible new gifts. He discovered he could paint images he had seen in the "Afterlife", over and above any artistic ability he previously had. He also identified that he can now compose classical music, having never received any musical training. Since his debut symphony, "The Divine Light", he has been commissioned to compose further classical works which have also been premiered at sell-out performances and has completed more than thirty paintings and a number of commissioned artworks. David's connect with us over the internet during Covid-19 from his house in the UK to talk about his incredible experience, the time his spent in the "afterlife" and his new book, "Shine On" available now on Amazon. An unbelievable story worth hearing so sit back and enjoy. This is the DNA Airwaves.