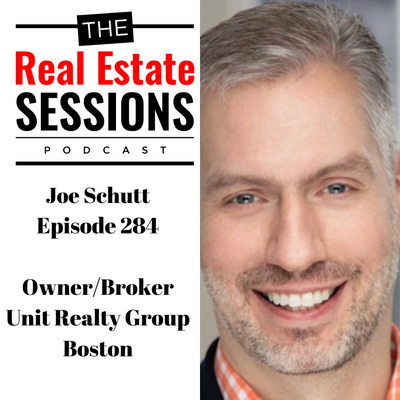 Today's guest, Joe Schutt, is a broker and the owner of Unit Realty Group in Boston. Although he spent his childhood growing up in West Springfield, Massachusetts, he moved to Boston 23 years ago.

In this episode, I sit with Joe, discussing his journey in Real Estate so far, with lessons learned, particularly the importance of being authentic and how it factors into success and growth in business.

"Just bringing a community together is a great thing... It's just a fun way to do things."

"Two things people need to understand... Be your authentic self, and work your sphere of influence."

"It's not about the money sometimes; it's about the relationships."

[05:50] The biggest misconception about Boston.

[08:32] What was the moment that triggered your entry into Real Estate?

Joe shares that his move from West Springfield, Massachusetts, to Boston was primarily out of a desire for the big city life and to figure things out as a young, gay man. The biggest misconception about Boston is that people are rude. Still, instead, people are usually struggling to get to where they're going in a city with many people.

Mainly working part-time jobs, Joe did not attend college but later started working in the banking sector, where he stayed for over 15 years with different banks till he discovered real estate. He had bought a condo with his ex, whose father noticed he was spending time on real estate-related activities and encouraged him to go into it.

Described as the most resilient city in the US, Boston did not experience as much of a downturn in real estate as the rest of the country. This resiliency is because of the high level of diversity in the Boston market, including biotech, finance, universities, teaching hospitals, and high-tech.

Joe mentions that while expecting to work in the primarily gay neighborhoods, he was, instead, put in an Irish community with all straight clients, exposing him to a new market, much to his benefit. Also, while he had initially thought he had to get as many clients as possible, over time, there was the realization of a need to carve out a niche, which he applies and emphasizes to his agents to this day.

The decision to start a company with his ex occurred while they worked for another brokerage, and both realized they might be able to open their own. After this, they intentionally decided to go and work for another brokerage for one year to ensure they could handle it before starting theirs. While planning how to run their brokerage, they had to decide on values embedded in the company, like giving back to the community and volunteering.

Joe emphasizes the importance of being authentic and cultivating great business relationships rather than always being a salesperson. Be your authentic self, figure out what's going on, take on the technology that works for you but don't go crazy with it; it's about relationships in the end. A part of growing friendships is to do so because of who people are and what they are; whether it's the real estate industry or not, it is essential to be involved and present without necessarily making it all about you.

"Inman" has been highly valuable to Joe and his business, not just as a resource but as a family. This resource points again to the value of relationships created and the depth of connections that, in the end, genuinely determine the growth of a business.

The branding of the company with orange was intentional to stand out from most other company colors. Apart from the main company website, there's also a new website for dog lovers. They are expanding on the dog aspect of the brand for people who want to live around a dog park.