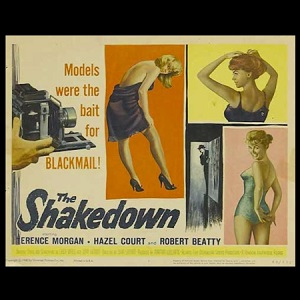 For the first episode of 2021 we’re going back to 1960 for The Shakedown, a grimy tale of a pimp turned blackmailer, Augie Cortona played by the devilishly handsome Terence Morgan. We’re joined by Richard Luck of the New European to talk about this classic Soho noir which also stars Donald Pleasence, Harry H Corbett, Hazel Court and Bill Owen.

Richard is very keen on the artwork for The Shakedown poster and there were several different versions made for various international territories. Click HERE for some lovely old posters and lobby cards.

The film contains this music interlude provided by Sheila Buxton.

The Song is also on this album.

In this (possibly slightly spoilery) scene, Augie sets the trap for his first blackmail victim.

In the first half of the programme, we are joined by Melanie Williams from the University of East Anglia to talk about the writer of The Shakedown, Leigh Vance who wrote several Soho films and was married to the first ever Bond girl. That’s Gayson. Eunice Gayson.

Click HERE for one of Leigh Vance’s later films in its entirety – Crossplot (1969) – which Melanie Williams has a theory about….

If you want to buy The Shakedown on DVD, the cheapest option we’ve found is to buy this box set from our friends at Renown Films

Although mostly shot in studios, there are a few outdoor locations in The Shakedown. Find out where they were shot, courtesy of our friends at ReelStreets.

Richard Luck’s books on film and music are available HERE and the archive of his articles for the New European can be found HERE.