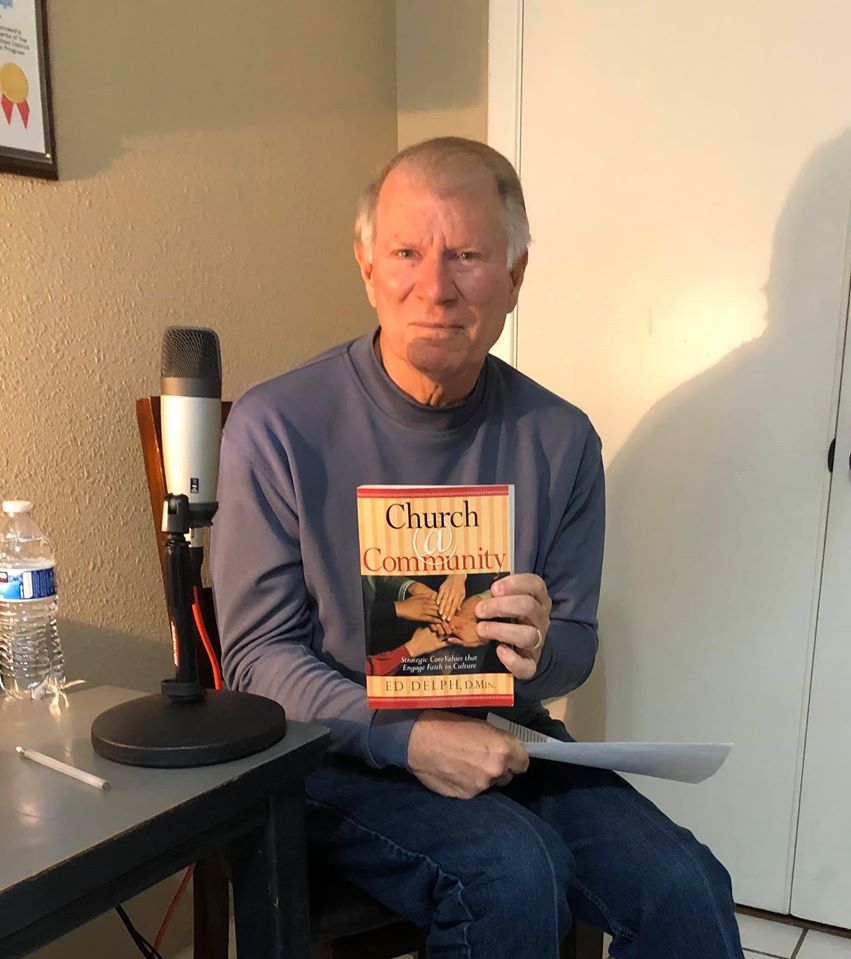 Ed Delph has been responding to God’s call to the church, community and to the nations since 1979. He has ministered or been in over one hundred countries as well as serving as a pastor in the United States. Previously, he was the Founder and President of Central Bindery, a large book bindery in Phoenix, Arizona.

He was the founding pastor of Hosanna Christian Fellowship in 1987. Hosanna started with 36 people and quickly grew to 750 regular attendees with some services over 1000 in the early 1990s. Hosanna was instrumental in many city reaching and community transformation initiatives in the Phoenix area as well as the world. Several churches were planted out of Hosanna both locally and internationally.

Ed received his Doctorate of Ministry in February 2004 from the Phoenix University of Theology along with Bishop Wellington Boone, Pastor/Author Terry Crist and others. Ed graduated in 1971 with a BS in Personnel Management from the Arizona State University School of Business. Ed has taken several post graduate courses with Talbot and Fuller Seminary.

A noted speaker, pastor, author and apostolic figure for many churches locally and internationally, Ed has served “the church” and well as “a church.” He is the President of Nationstrategy, an organization that unleashes the potential of communities through the strategic alliance of church, business, government, education and media for the benefit of the community. Nationstrategy was started in 2000 with the strategy of envisioning and empowering some of today’s leaders in the church to be some of tomorrow’s leaders in the community. The role of Nationstrategy is to reveal ‘mindskins’ that create wineskins and environments for community transformation and upliftment. Simply said, Nationstrategy envisions and empowers community and church leaders for societal transformation by case presenting, teaching, coaching and mentoring.

He is the past Dean of Faith in Culture at Phoenix University of Theology and served on the National Association of Ecclesiology with leader Dan Reeves. This Association is a coalition of major seminary presidents, denominational heads, and leaders of church movements.

Other interesting points about Ed:

* He has written nine books. The first is Making Sense of Apostolic Ministry, published by the International Resource Network in 2002 and 2009. The second book, Church @ Community was published by Creation House and was released in 2005. This book is in its fourth reprint. His third book is called Learning How to Trust… Again, published by Destiny Image in 2007 and is now in its third printing. Several of Ed’s books are translated and published in Korea, Brazil, Malaysia, Thailand, India and South Africa.

Ed’s fourth book The Five Minute Miracle – Standing Out by Becoming Outstanding. This book is published by Destiny Image Publishers was released August 2008. Ed also wrote People Who Overcome – Turning Temporary Crisis into a Permanent Gift, released in 2011. His next three books have all been released in 2013: 1) Blessed to Bless, Loved to Love, Led to Lead – There’s a Leader Inside of You Who Is Dying to Lead Others through You! 2) Richly Blessed, Deeply Loved, Highly Favored, Amazingly Graced – Seeing Yourself the Way God Sees You. 3) City Changers – When the Saints Go Marching Out! Ed released his most current book in 2015…The Most Wonderful Times of the Year – Celebrating the Holidays all Year Long.

*Ed has written four articles for Ministry Today magazine. His last article called Favor with Man was published in the September/October 2006 issue. He was also one of five influential apostolic figures interviewed in a Ministry Today article written by Dr. C. Peter Wagner.

*Ed writes a weekly article entitled The Church-Community Connection which is published weekly in The Glendale Star, The Peoria Times, and the Buckeye Valley newspaper. The articles also appear in several newspapers worldwide. Most of these newspapers are local paid subscription newspapers. The goal of these 450-550 word articles is to build a bridge to the community through humor, wisdom and changing mental perceptions that the community has of the church. Just in the Phoenix area alone, Ed ministers to over 50,000-100,000 citizens each week through The Glendale Star and The Peoria Times newspapers. Ed has been writing this article since November of 2004.

*Ed is one of three directors of the Global Apostolic Partnership network. This network of churches is located in South Africa.

*Ed is also on the Board of Directors of Life Churches, a Canadian based network of churches under the leadership of Pastor Gary Carter in Edmonton, Canada. This network planted several churches in Canada as well as Belize and Scotland.

*From September 1980 to May 1987, Ed served at Grace Community Church in Tempe, Arizona as a Singles Pastor. The singles ministry at GCC grew to 550 singles. Ed served at Grace for two years. Ed then served as Singles Pastor at Northwest Community Church in northwest Phoenix at the request of Pastor Pat Shaughnessy. The ministry at Northwest grew from 16 to 250+ in 4 years. Ed has conducted singles seminars and conferences all over the world.

*Ed is still involved in business, buying and selling undeveloped land in the state of Arizona from time to time.