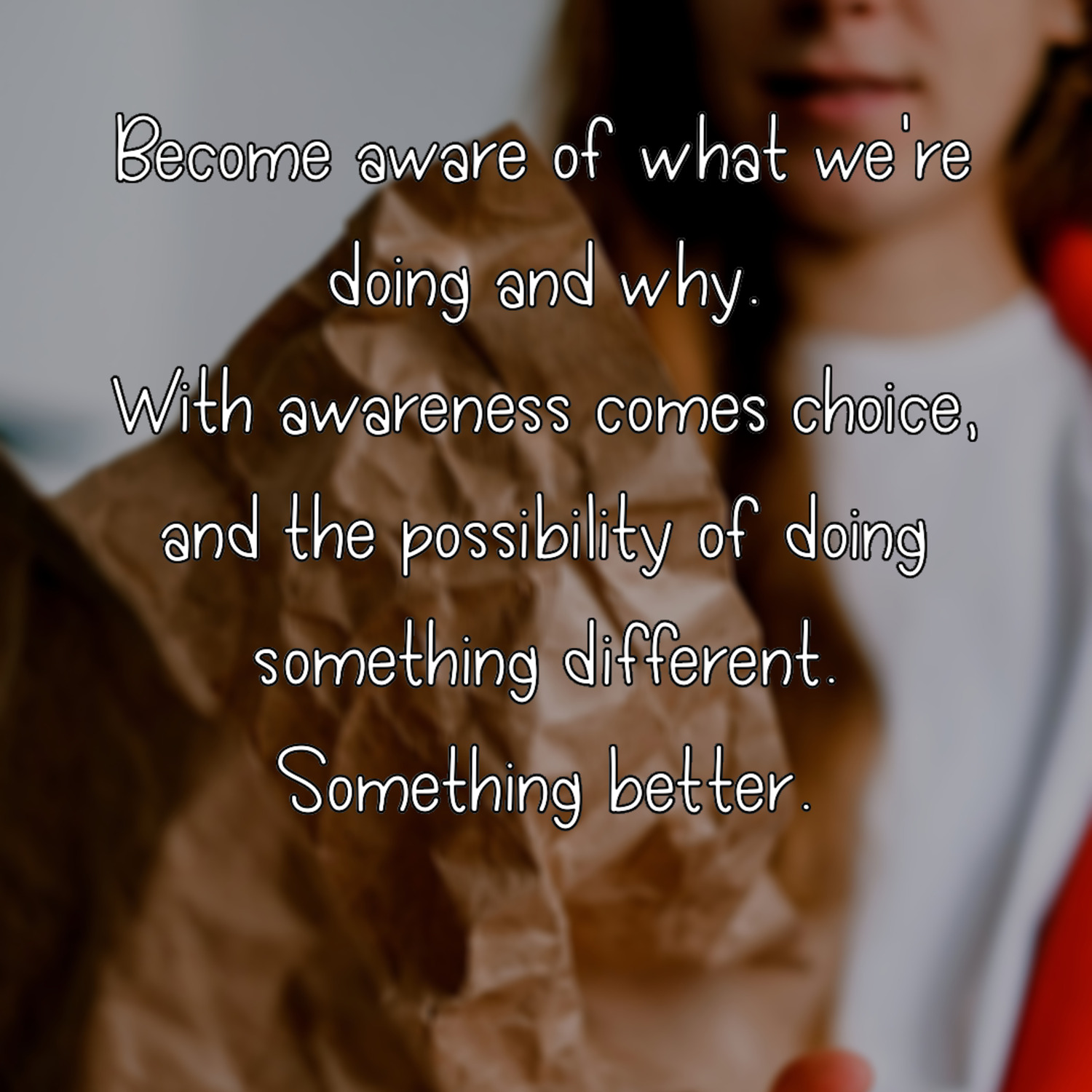 We know self-delusion is at play if we recognize defense mechanisms, which develop to protect our ego from uncomfortable truths. Nobody can tackle our defense mechanisms but us. There are many common mechanisms such as denial, repression, regression, projection, displacement, etc. Each can be identified through its own unique indicators, but the thing unifying them all is that they allow us to stay in a comfortable bubble where we can get away with not challenging ourselves enough to experience substantial growth.

Essentially, a defense mechanism exists for one purpose: to protect your ego. They’re like a wall you build between yourself and any unpleasant emotions, thoughts or memories you don’t feel able to cope with. Any unwanted feeling can trigger a defense mechanism, but the process is almost always unconscious.

The goal is not to completely rid yourself of defense mechanisms—it’s healthy and normal to have an ego that you want to protect, and we all need a bit of a cushion between us and the sometimes harsh realities around us!

The trick is to become aware of what we’re doing and why. With awareness comes choice, and the possibility of doing something different. Something better. Awareness puts you in control, rather than having you merely be at the mercy of unconscious forces.

You don’t need to get carried away with psychoanalyzing yourself; even becoming aware of just the tip of the iceberg means you can start to hold yourself accountable and find healthier ways of coping with unpleasant emotions, even using them to inspire growth and development.

The most common and basic defense mechanism is plain old denial. You simply refuse to see the facts staring you right in the face. When faced with extremely distressing situations that we might struggle to cope with, our brains respond by simply shutting themselves off to the truth in order to avoid a confrontation between our internal perception and reality. For example: Despite being confronted with ample evidence that they are seriously ill and will die soon, a person may refuse to think about it and avoid the topic entirely.

Another example is believing that you’re “just a social drinker” when in reality you have a serious drinking problem. Nobody wants to view themselves as an addict, and so they just refuse to believe anything that might indicate as much. If you suspect that you’re in denial about something in your life, consider whether you tend to avoid thinking about that fact or avoid situations which may make you question your perception of things. If you do, you might be utilizing this defense mechanism.

Projection is another common one, and it happens whenever we take rejected parts of our own psyche and attribute them to others. The common story of the rabidly homophobic minister secretly being gay themselves is an example, as is the tendency people have to suspect others purely because they themselves are behaving suspiciously.

If you tend to project your emotions onto others frequently, that might be an indication of you not knowing yourself well enough. This is because projection often results from an inability to accept our own thoughts and emotions, and so we attribute them to others in order to avoid feeling bad about ourselves. Those who have low self-esteem or suffer from an inferiority complex are also prone to using projection. By working on these underlying issues, you’ll recognize yourself using projection as a defense mechanism much more easily.

A slightly different coping mechanism is displacement, where we take our emotions and express them toward a more acceptable target, instead of where they really belong—for example, blaming your bad mood on the daily commute when you're really unhappy in your job.

While displacement may allow you to express your emotions toward less risky targets, it prevents you from learning how to appropriately deal with them. It can also result in you hurting people who are completely innocent, and these are generally the people you love most. If you find yourself constantly taking out your frustrations on particular people because you feel that it is “safe” to do so, you may be overusing this defense mechanism.

Repression occurs when we push unwanted emotions out of awareness, a little like denial but much harder to resolve. The difference between the two is that repression involves a complete burial of painful memories or experiences deep in your subconscious, whereas the thing you’re in denial about is still in the realm of your conscious awareness.

Difficult thoughts or bad memories can still haunt our dreams or unconsciously guide our behavior. Repression is arguably the most difficult defense mechanism to identify. However, some useful indicators are having nightmares with repetitive themes, angry outbursts or disproportionate levels of anxiety due to certain triggers, etc.

Regression is less common, but makes a lot of sense—we regress (escape) to an earlier developmental stage when we feel threatened or overwhelmed. This is common in children (for example, beginning to suck your thumb again after a trauma) but also occurs in adults. Have you ever seen a grown-up throw a “tantrum”? They may have been using this coping mechanism.

Defense mechanisms are seldom this simple, though. The most persistent and difficult ones are the hardest to spot. Rationalization is a tricky one, especially when employed by intelligent people. It means we use “facts” to justify and explain what are really irrational, emotional impulses.

So if you stood a friend up because they’re usually late for your meetings, you’ve rationalized away bad behavior on your part. One trick to identify rationalization is to try and put yourself in the spot of a third person who has been offered the justification you just gave yourself. You’ll likely see the flaw in your reasoning.

Intellectualization is related, where we distance ourselves from our emotions by engaging fully in cold, hard facts—sadly an impulse that is sometimes rewarded in our culture!

There are many other defense mechanisms, but you get the idea. However many painful, difficult emotions exist, there are as many ways to avoid, deny or minimize our experience of them. What’s important is not the many different ways we can deceive ourselves, but rather how we can step outside of this self-deception and toward conscious, intentional thinking instead.

Becoming aware of your psychological “blind spots” requires a little bravery, and a willingness to be honest with yourself. If you have friends and family you really trust, you might be surprised at their answers if you ask them to help you recognize your defense mechanisms in action. After all, these defenses often appear in our relationships with others, so these people may have keen insights into things you yourself are unaware of.

A therapist can play the same role, with the added benefit of offering an anonymous space where you don’t feel judged. Remember that defense mechanisms serve a purpose—try not to get rid of them without ensuring that you can replace them with other, healthier coping strategies.

This is where we return to our four-step process, which is not just about removing harmful mental blocks, but also about replacing them with something better. Defense mechanisms can seem pretty scary, but they are nothing more than beliefs. And beliefs can be changed.

Let’s consider a very common scenario, and one that you’re likely to identify with in some shape or form. Consider a woman who feels bad about herself. Imagine she hates the way she looks, and feels ashamed about many of her life decisions. Let’s say she married someone she now realizes is a terrible match for her, had a child she didn’t really want, and works at a job she doesn’t actually enjoy.

These are pretty heavy truths. Acknowledging them head-on would be incredibly painful and disruptive; what’s more, they’d demand that the woman change. And that’s scary. She’d have to get divorced, or change jobs. And what about her child? What on earth could be done about those feelings?

The woman protects herself from this disruptive, painful information. She refused to acknowledge it’s there at all (denial) and may even go over the top trying to convince herself and others that the opposite is true, by doting on her children and loudly claiming how in love with her husband she is (this is a defense mechanism called reaction formation, by the way).

She could also work hard to repress these ugly feelings, but they may come out in dreams or slips of the tongue. She may even unconsciously sabotage her marriage or make “mistakes” at work that could get her fired. Through it all she could engage with rationalization and justification, telling herself convoluted stories that cleverly conceal her true feelings even from herself.

Perhaps most interestingly, she may end up projecting—this is the super-dedicated mom who is full of judgment for other women. She finds herself being mean to women who don’t have children, calling them selfish. She scoffs at other people’s relationships and believes that everyone is secretly unhappy but pretending otherwise. When someone around her appears to have made a mistake, she heaps on the scorn and judgment (that would ordinarily have been directed toward herself) and spares herself the truth.

The defense mechanisms are doing their job—the woman remains completely unaware of her real feelings, having pinned them all on someone else, and her ego is saved the upsetting disruption that being honest would bring. This is a dynamic that you will see play out not just individually, but with families, communities, even entire nations.

It’s a common political adage that if you want to know what your own country’s government is doing in secret, look at what they loudly declare their enemies to be doing. The same principle of denial and projection is underway. “They are terrorists but we are brave freedom fighters” is nothing more than a rationalization.

No matter how big and stubborn the defense mechanism, however, it can be removed with patience, honesty, bravery, self-compassion and a commitment to living with conscious intention and integrity.

The woman in our example can uncover the reasons for her defense mechanisms by asking why she feels and thinks as she does. There are several layers to this: Why does she feel that her life choices were a mistake? But why also does she feel that having made these mistakes is so unforgivable?

By looking closely at her core beliefs and narratives, she can become more aware of them as they occur, gradually bringing this material into consciousness. She can start to remove them, deliberately replacing them with thoughts such as, “I can’t change the past, but I can choose my behavior right now,” or “I am not a bad person if I make a mistake.”

Of course, bearing in mind that we don’t want to completely eradicate defense mechanisms, only reduce them, she can adopt a moderate, understanding attitude toward herself. Though it’s true that she can learn to forgive herself for making choices that were wrong for her, she can also use her life experience as a lesson, teaching herself never to compromise on what she really wants, and to take full and conscious ownership for her one and only precious life. It’s this attitude that will bring her closest to a life that she actually does desire.

In this way, her difficult emotions and her defense mechanisms can be transformed into something valuable, and an opportunity to grow and be better. It won’t be easy. It certainly won’t be pleasant. But it will be honest and brave, and it will be the single best chance she has of living a life of honesty, integrity and purpose.