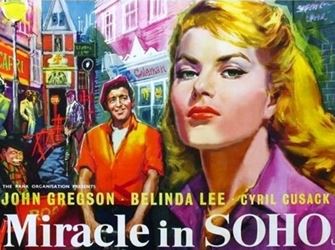 Episode 7: Miracle in Soho (1957) & Alex Hester on his late father, the former vicar of Soho

Episode seven is our God and religion special and we were joined by two fantastic guests. Firstly, Alex Hester sat down with us at St Anne’s Church on Dean St, to talk about his late father, the former rector of St Anne’s, Canon John Hester.

John was in post from 1963-75, so to be the vicar of Soho at this time and chaplain to over fifty strip-clubs must have been an unusual calling.

There’s currently one copy available online here. Snap it up!

We also spoke to Rev Liz Clutterbuck of Emmanuel Church, Holloway about the Emeric Pressburger penned 1957 romantic tale, Miracle in Soho. Liz makes regular contributions to the Kermode & Mayo show on BBC Radio 5 Live and is a proud member of the Wittertainment Clergy Corner.

Promo produced by Talking Pictures TV for a recent screening of Miracle in Soho.