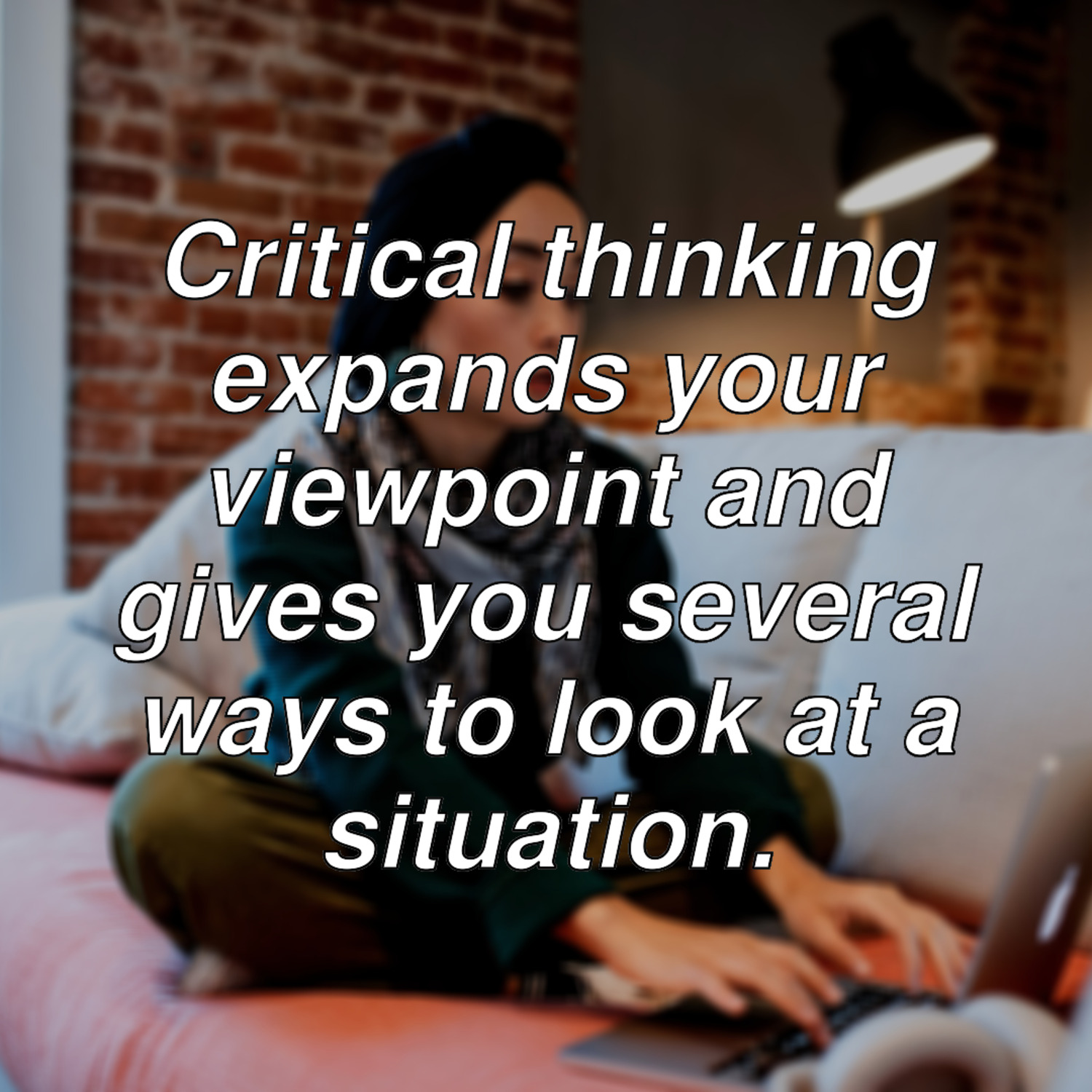 Next, we come to critical thinking. Critical thinking is concerned with questioning answers rather than asking questions. It seeks to take nothing at face value and provide a three-dimensional and nuanced view of a topic or stance. Without that, you are by definition jumping to conclusions or relying on someone else’s word—an opinion without inquiry is a weak one. We can practice critical thinking through a series of questions.

Critical thinking is the act of delaying gratification instead of accuracy and a three-dimensional understanding of the nuances presented to you. It’s not popular as a way of navigating life, but it’s how you will learn to look beneath the surface of any statement.

The goal of critical thinking isn’t to produce a quick, easily digestible answer. In fact, it’s not even to provide any certifiable conclusion whatsoever. Instead, critical thinking is to make a topic more transparent. The essence of critical thinking centers not on answering questions but on questioning answers. The approach is different, but the end goal is the same as skepticism’s—to find the truth of the matter.

Rather than provide a rock-solid, inarguable conviction, critical thinking expands your viewpoint and gives you several ways to look at a situation or problem. It gets you past the external noise and easy answers to show you the whole scope of a circumstance or issue. It allows you to discuss information or a topic, even if only with yourself. That’s where you’ll learn more than what meets the eye.

The questions you use in critical thinking go beyond standard “just the facts, ma’am” inquiries. Instead, they challenge the answerer to probe the reasons for a subject’s importance, its origins, relevance, and countering or alternative beliefs. They can be applied to any subject—even with some adaptation, scientific or mathematical principles. The goal isn’t to get you to agree or disagree with a given doctrine but just to understand the totality of its meaning.

Let’s try an example: the theory of gravity. All you need to know is that it is generally one of the laws of physics that govern our planet and the universe as we know it. We might think we know what it is, but subjecting it to a line of critical thinking questions would probably uncover the fact that it’s not what you first thought.

Here are some questions you could use to critically evaluate the topic. I’m not going to attempt to answer them because I wasn’t a physicist, at least last time I checked. But I did look up enough to form some decent questions, and the main point of this exercise is to show how they can be phrased:

What differentiates the theory of gravity from other theories? Why? This question seeks to discover why the idea does or does not have special significance.

What is an example of the theory of gravity? This question seeks to gain understanding through a concrete example.

What are the differences between the theory of gravity and other physics laws? This query compares two different models and allows you to understand what sets one model apart from the other.

How is the theory of gravity related to quantum physics? This question sets up a description of how the subject relates to other existing knowledge.

What evidence can you provide for or against the theory of gravity? This question forces acknowledgment of both positive and negative aspects of the subject. Each subject or topic has weaknesses and strengths regarding its applicability and universality.

What patterns do you notice in the theory of gravity? This helps you search out repetitive elements and cause-and-effect relationships, almost always indicating importance.

When might the theory of gravity be most useful, and why? This question looks for an example of how the concept is used in the real world and can affect your life.

What criteria would you use to assess whether the theory of gravity is accurate? This question seeks how to establish hard proof that a concept is working or not and introduces the concept of specific metrics.

What information would you need to make a decision about the theory of gravity? This question addresses how Keynesian models can thrive and what contextual information is important.

Do you agree that the theory of gravity works? Why or why not? This question encourages you to use your reasoning to judge the merit of a certain concept.

How could you create or design a new model of the theory of gravity? Explain your thinking. This question urges you to reimagine the concept following your own ideas and project how they could work in the future.

Whew. That’s many questions. It’s only a fraction of the many sides and angles from which you can examine any given issue. None of them are answered in definitive terms, nor can they be. But their open-ended nature encourages you to pursue the facts from an objective standpoint. Is this beginning to sound circular and repetitive? It can indeed be a never-ending and tedious exercise, but it becomes more meaningful if you keep the purpose of discovery and perspective at the forefront.

At this point, you may have used all your answers to formulate a theory or conclusion—or perhaps you’ve come across conclusions from others that address their interpretation of what the facts mean. But as with the questions you’ve just asked, the ideas you come across (even your own) should also be subjected to the same inquisition as to whether the conclusions are sound and hold up.

The first few questions should address the structure of the conclusion, whether it comes from a sound basis in reasoning. A second set of questions focuses on the quality of the conclusions and supporting arguments. We can see this through the same example of our theory of gravity model:

What are the issues and conclusions of the theory of gravity? This question addresses the foundation of the theory—the problem it was trying to solve—and the answers.

What are the reasons for your conclusions? A well-worded conclusion will list out the facts being used to support it. This question identifies what those facts are. And it’s crucial to separate facts from anecdotes or feelings.

What assumptions are you using in your theory? If any variable factors are being used when the conclusion is formed, it’s important to ferret them out. For instance, generally, the theory of gravity assumes that the laws of relativity apply, and a quantum singularity is nowhere nearby.

The next two questions seek to expose the shortcomings of thought that may have compromised the finding of the conclusions:

Are there fallacies in the reasoning? This question seeks out any inaccuracies, mistakes, or outright falsehoods in any of the reasons given.

How good is the evidence? This is how you check that the supporting facts behind the conclusion are airtight, from legitimate sources, and not discolored by bias or misinformation.

There’s a chance that these questions might raise even more questions instead of answering all your inquiries. But again, that’s the main point of this line of interrogation: to create a three-dimensional view of the topic you’re investigating and not just stop at the first answer that looks “certain.” Just because something is certain, it does not mean it is truthful.

But wait—critical thinking can go even more deeply, and we look to the Paul-Elder model for that. This approach is really going deeper into the rabbit hole, so to speak.