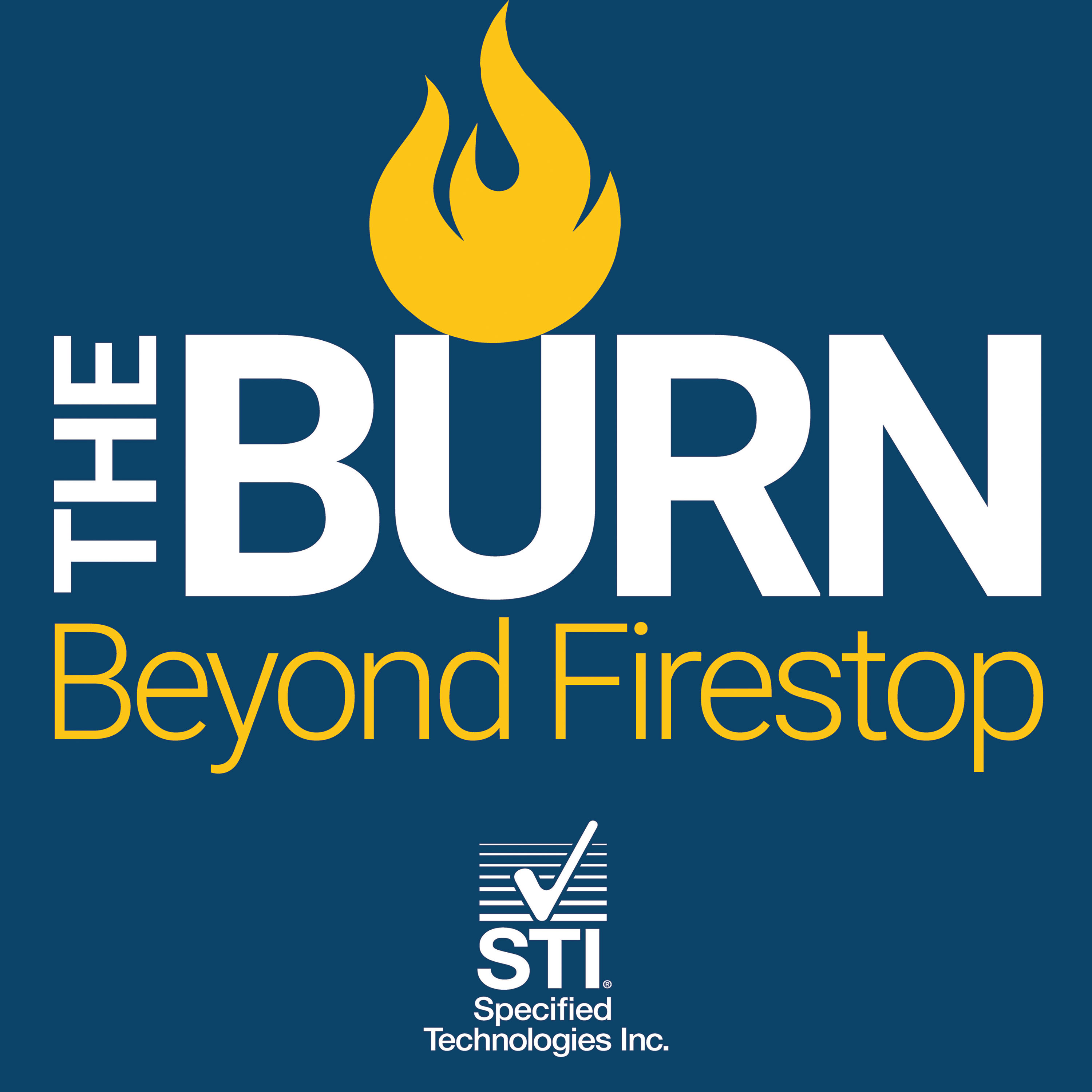 The Burn: Beyond Firestop

Welcome to The Burn, Beyond Fire Stop. Our show is dedicated to life safety and code compliance in the built environment, which puts me on a mission to find the most interesting people in this space to get their unique perspective. Our hope is that our listening audience walks away with an understanding of how our guests and their businesses and organizations contribute to the promotion of life safety of whatever is being built. Our show is brought to you by Specified Technologies, Inc. Also known as STI Fire Stop. And since 1990 STI has been a leading global provider of innovative fire protective solutions that help stop the spread of fire, smoke and hot gases.

Our guest today is no stranger to these such topics. Bill McHugh has been involved in the construction industry for over 39 years, focusing on several industries, including roofing, waterproofing, fireproofing, and my favorite, firestopping. Over the past 33 years, Bill served in managerial roles at large and small corporations. He’s been in manufacturing, a contractor, distributor, and he’s presently an association management professional, which includes his work as executive director of the Firestop Contractors International Association, FCIA, and a few others that we’ll get into today.

Masters Degree from Western Illinois where he coached Diving

Randomly submitted resume and was hired at Grace Construction Products

Introduced to Fire Resistance when he became District Manager

Real exposure to Firestop came when he worked for Polyguard Products.

Transitioned to distribution and eventually into contracting

Became a student of the industry, business and started teaching as well

Teaching grew to regional presentations and eventually to presenting to national associations and writing articles/books.

Believed in the proper design installation inspection and maintaining protection.

Focus was always Firestop at FCIA

Worked with FCIA Committee to creat Firestop Manual of Practice.

Wanted programs to separate contractor and inspection organizations who don’t specialize in firestopping.

Everyone should come together on Code Development and Standards, and maintaining protection in existing buildings.

D I I M Philosophy

Need to have both inspection and a contractor understanding listings for firestopping safety.

Getting contractors involved in FCIA

Mission to involve people in the industry whether they are accredited or not.

Get people in, teach them the proper protocol, improve installed quality of firestopping.

Membership is expanding across the globe

The latest with the FCIA

Over the past 33 years, Bill McHugh has been a manager at very large and small corporations, a contractor, distributor, and presently an association management professional.

During his time with W.R. Grace, Construction Products Division, he worked in the Chicago Roofing and Waterproofing markets servicing contractors, specifiers and roof consultants. While at Grace, he earned the top honor, 'SalesMaster' Award in 1984. His role as a Branch and District Manager took him to Wisconsin, Minnesota and the Southern Region Birmingham AL District. A National Sales and Marketing Manager opportunity took him to the Dallas area where he covered the USA managing independent manufacturers reps and distributors while developing marketing and sales strategies for Polyguard Products.

In Firestopping, he lead development of the Chicago and Wisconsin firestop markets through speaking and writing locally and nationally to specifiers, building officials and fire marshals, fire inspectors, contractors and others. Bill helped found the Firestop Contractors International Association in 1998 with seven colleagues.

FCIA's founding in 1998 brought him into 'sole proprietorship' as an association management professional until The McHugh Company formed in 2004. From a home office, The McHugh Company has grown and continues to serve the almost 360 company members worldwide at FCIA, another 360 members at CRCA/CRC, 150 at the NFCA and 35 at ADI _ through continued program and membership development - with the talented employees at TMC in professional offices in Hillside, IL.

FCIA Members are companies that provide services and products to the firestop, barrier management, and fire-resistance-rated and smoke-resistant assembly industries. Through active participation in FCIA and related forums, Members contribute to the advancement of the firestop and effective compartmentation industry and maintain exceptional knowledge of this specialized trade.

Since 1990 Specified Technologies, Inc. (STI) is a global leader in the firestopping industry. The company manufactures a wide array of products and technologies to provide passive fire protection. Headquartered in Somerville, NJ, STI has sales offices all over the globe. STI Marine is a Division of STI that specializes in marine fire protection in the cruise line, offshore oil and gas, and general maritime industry. STI Marine’s product line consists of a full range of products used for penetration seals and cable transits in fire-rated bulkheads and decks, including water-tight firestop sealants, firestop collars for plastic piping, and an innovative cable transit device. All products comply with the IMO FTP Code and are subject to various Type Approvals include MED, DNV GL, Lloyds Register, ABS, USCG, BV, RINA and more…