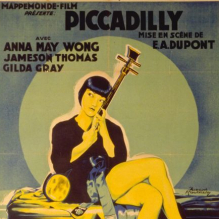 Episode 8: Piccadilly (1929) & Julian Rodriguez on the Shot in Soho exhibition

For episode eight we met up with Julian Rodriguez, to talk about the exhibition he co-curated at the Photographers Gallery, Shot in Soho.

Julian is a photographer and, among several academic posts, is Head of Film and Photography at Kingston University.

We have been given permission to show two pictures from the exhibition. You can find them HERE

You can buy the book of the exhibition here

The Regent Street Cinema decided to screen a Soho film to accompany the show. Of the several that Julian and his co-curator, Karen McQuaid, suggested, the one the cinema chose was the brilliant Piccadilly from 1929.

The screening took place on January 30th and had live musical accompaniment by Ben Comeau who has recently joined Lucky Dog Picturehouse.

Clip of Piccadilly produced by the BFI

Many thanks to Michael Schaub, Deputy Director of the Regent Street Cinema, for enabling us to record the intro to the film.

Afterwards, we sat down to talk about the film with members of the London Silent Film Group, including Peter Bromley, a documentary film maker and founder of the 1968 Film Group, and Michelle Facey, who programmes silent films for Kennington Bioscope at the Cinema Museum.