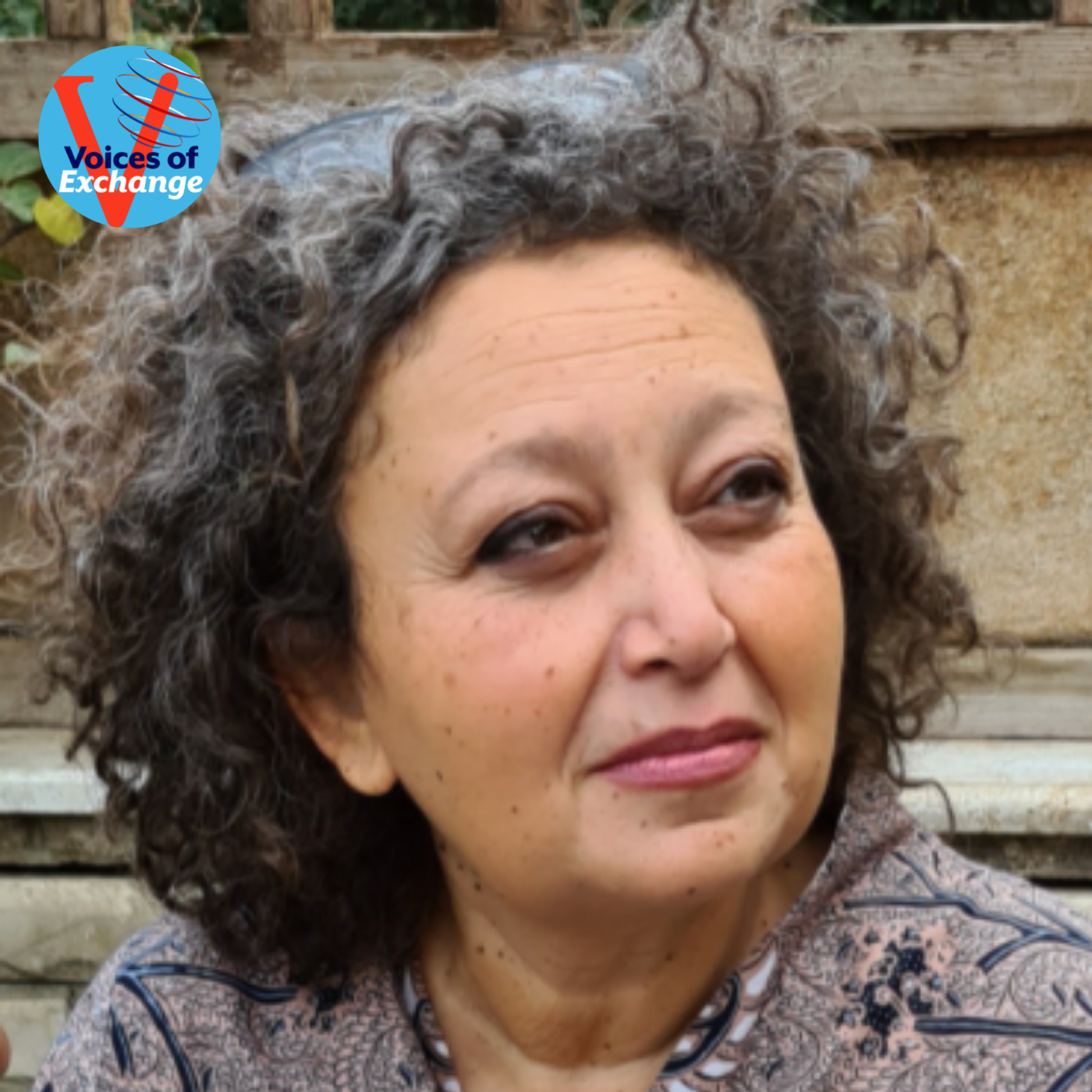 When you think of Egypt, images of pyramids, statues, and mummies likely come to mind. But these iconic monuments and objects haven’t survived millennia on their own, and they’re not the only elements of cultural heritage Egypt has to offer. On this episode, Dr. May al-Ibrashy, an exchange alumna of the Middle Eastern-Western Dialogue Program, shares her trailblazing approach to preserving Egypt's cultural heritage, why these values are universal, and how funding from the U.S. Department of State is making it all possible.

I’m May al-Ibrashy. I’m the director of the Imam al-Shaf'i Conservation Project. which is what we're gonna talk about today. I am an architect, and I specialize in heritage and conservation. And for years, I've also been studying the historic cemeteries of Cairo, which are very special, because they're very old, but they also have a very old tradition of being multifunctional. So they're not just funerary, there are also places where people live, and where there's commerce, and where there are markets.

And there're also sites of visitation. And, arguably, the most important site of visitation in the Southern Cemetery is al-Imam Shaf'i, uh, Mausoleum. This is a mausoleum from the 13th century that houses- that has within it the ... Al-Imam Shaf'i who is one of the fa- one of- a fa- the founder of one of four rites of Sunni Islam. So it's a very important building, both spiritually and historically. And also art historically, because it's almost like a, like a record of all the styles, uh, from the Islamic period that you have in Egypt, from the 12th- from the 13th century onwards.

Understanding the different types of significance, uh, for the building for the different kinds of users. Because it has so many meanings, different meanings for different people.

You are dealing with a- with a cemetery, and so you are required to- to, uh, deal with it, the kind of respect that a cemetery deserves, especially a cemetery that is that historic, and that also has a number of shrines and burials of spiritual significance.

You also have to take into account the fact that al-Imam al-Shaf'i is the center, not just the spiritual, but also the residential and the commercial center of al-Qarafa, or the Southern Cemetery.

So you have residents living around you, and you have to take those into account- uh, into account as well. Then, you also have to, uh, work with the understanding that it does not just belong to Egyptians. Uh, it belongs to Muslims in general, Sunni Muslims in general from all over the world who ... Especially those who are, uh, uh, who adhere to al-Shaf'i as the Sunni rite, as a Sunni- as a branch of Sunni Islam, if you will.

We had a concern about the relationship between monuments and heritage sites, and the community around them, especially in densely populated living cities like historic Cairo. And we felt that the- the best way of preserving and safeguarding the heritage of cities such as these, is to bring the community in as a- a main actor, a main player in the process of conservation.

We felt that historically, this had not been the case, and that people's connection to these heritage sites had been- had weakened, had lessened through the years.

Is it true that if people have a sense of, uh, ownership of their heritage, they will take better care of it? And if it is true, how do we, strengthen this, uh, sense of- of ownership? And at the end of- by- at the end of the six months of discussion, we felt that this sense of ownership is strength- strengthened through benefit, that if, uh, people feel that there is, uh, uh, that there is a link of mutual benefit between them and, uh, heritage sites, and that if they feel that they benefit from these heritage sites, whether spiritually or socially, or economically, or culturally, they will take care of.

And this is how we came to the general mandate of our initiative, which is heritage as a driver for development.

So in the case of a place like al-Imam al-Shaf'i, um, this is a very specific kind of building. We cannot really drive very- um, kind of functional uses out of it, you cannot adapt it- adapt it for another re- use for example. But what you can do is, uh, to uh, amplify sp- spiritual benefit at many levels, for different kinds of people, to amplify cultural benefit, and, uh, also, at many levels. And to also figure out ways where the local community feels that the building serves them in some way.

So in our case, the visitor’s center also incorporates an activity room for children, and the training includes, uh, training for, uh, the people who will be running, uh, the visitors center from the government, to run, uh, regular activities for the children of the neighborhood, maybe to incorporate women as well, so that there is an educational benefit that people feel connects them more, uh, to the building.

In other neighborhoods where we work, we kind of open it up a little bit more. So for example, in the neighborhood of al-Khalifa, which is the city proper, we investigated the problem of groundwater, and drive the solution to de-water heritage sites, but also use the water extracted to irrigate, uh, gardens around. And so to introduce gardens for the benefit of the community, and also in the process, lower the water level for the benefit of the heritage site.

So these are the kinds of things that we try and investigate in order to, uh, um, to create stronger links between the community and their heritage, so that they feel out of their own accord that they want to take care of these buildings and safeguard them and protect them.

I kind of took the time off to think about it.

And to be honest, when we sta- first started investigating this idea of linking heritage to the development, we didn't really know where we were going to land. I mean we started off with a- had a theoretical question question, if you will. But by the end of it, we found that we were on to something that has potential, and we started off with conservation and heritage education. Then, that extended to, uh, heritage industries as well. And then it ex- it extended to working on an urban, uh, level, an urban regeneration. And we started off in one neighborhood. In, uh, in the municipality.

Of al-Khalifa where we work. And now we work on t- in three different neighborhoods.

And as we do that, we- we develop more and more techniques to create these kinds of links. And it's very gratifying because it has taught me a lot, because it has taught me that heritage is not just about what is 600 years old, maybe even more importantly it is about the heritage that we are making today for the future. And to make heritage, you have to create this link, because you want this continuity. And it does not happen without people feeling that they have a strong relationship to, uh, their heritage.

The idea of the school is to educate children about their heritage in a manner that is relevant and that is interesting. And to create this link between the past and the present that shows them that they are part of this continuum, that puts them in the place where they understand that they themselves are creating their own heritage and their own culture.

If I'm going to teach them science, there is a link to the history of science, and how it relates to buildings that they have, they see around them that are also historical.

Uh, this program developed after to include a heritage industries component for teenagers where they start to investigate, uh, vocations, and, uh, and professions that they could pursue that also are, uh, related to heritage, but from which they can actually derive a livelihood. And this has been very interesting, we- the- our teenagers are now designing products, they're running tours, and quite a few of them are now interested in pursuing, uh, vocations and professions that are heritage-related.

Uh, we also have a program for women that does the same thing, but with women so that they themselves encourage their children to do that, and they're able to educate their children. So we expand bit by bit according to kind of the terrain and where it leads us, but also with a very specific mandate in mind.

I think the most important thing I would say is that.

It's a technical know-how. And it's, uh, it- it- it requires running a site, the way you run a construction site. It requires understanding structure, understanding the qua- the- the properties of material, understanding chemistry. Uh, it's- it also requires people skills, because you're running a team.

In parallel to that, you have to have the, you know, the spirit of a researcher, because as you conserve, you learn, and you do more research, and you learn more, and it's an- it's an intern- uh, an in- there in- in- it's interchangeable. So you have a question, you investigate it in one way, and then you're cross-referencing with something that you find on site, and then you go back and investigate again. And it doesn't end.

So it's important to keep that kind of spirit. But then you also have to have, um, a passion for understanding the socioeconomic context, the urban context, and for connecting, uh, between the- these different kinds of disciplines.

So it's quite tiring, but it's also extremely gratifying. And it's never boring. (laughs) And- so we get a lot for people who are- who hear about us and are interested in training with us or working with us, and a lot of people- some people drop out, because they feel that it's overwhelming, or it's, uh, not the field that they're interested enough.

But those who stay, they stay, because it's almost- there's this ... No day is the same as the next. It is not a boring nine to five job, it is an extremely stimulating and gratifying job. It's also extremely tiring, and at times, extremely frustrating. So it is not for the faint or the weak-hearted. (laughs) This is what I'm saying.