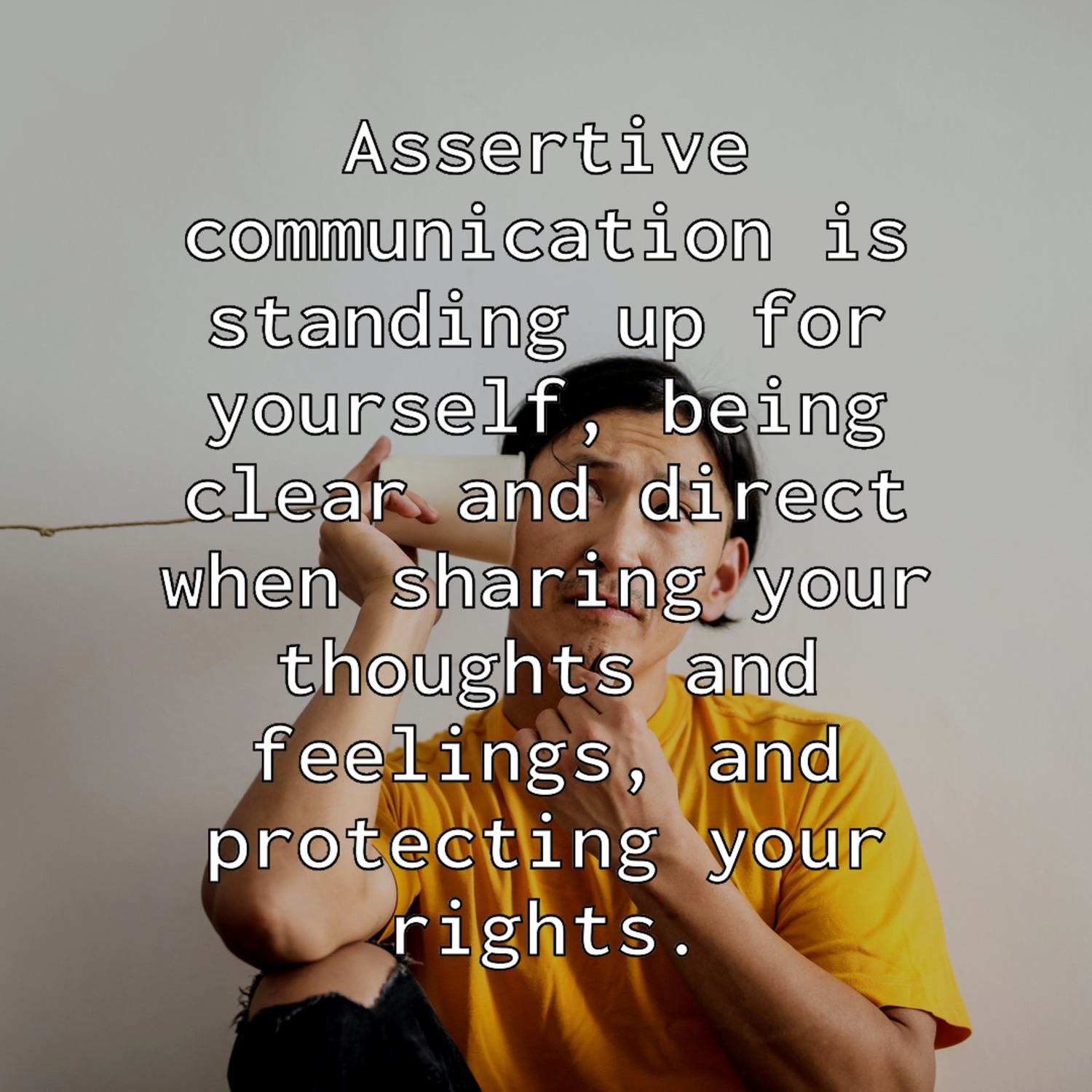 Assertive communication is standing up for yourself, being clear and direct when sharing your thoughts and feelings, and protecting your rights without taking away the rights of other people. Assertive communication is a product of high self-esteem and doesn’t come naturally to people who haven’t been taught to respect themselves and others and to value themselves on a physical, spiritual, and emotional level. When you seek to control only yourself, you are assertive; when you seek to control others, you become aggressive.

Assertive communication is standing up for yourself, being clear and direct when sharing your thoughts and feelings, and protecting your rights without taking away the rights of other people. Assertive communication is a product of high self-esteem and doesn’t come naturally to people who haven’t been taught to respect themselves and others and to value themselves on a physical, spiritual, and emotional level.

Assertive communicators are just as good at listening as they are at clearly making their point. They don’t allow others to abuse them and make sure to treat others respectfully, giving good eye contact and standing tall with open, relaxed body language. They feel they deserve a fair outcome and are confident in themselves, creating a safe platform for others to express their views. They feel connected to the world around them, and all challenges are seen as an opportunity to mature.

Assertive communicators can navigate any situation without the hangover of resentment, anger, or lack of control that the other three styles generate. The assertive communicator doesn’t dread confrontation or overcompensate for feelings of insecurity by bullying others. They ask for their needs to be met and accept the response; in turn, they expect others to respect them when they give their own opinion.

An angry customer has raised his voice at a retail worker who calmly explains that although she understands he’s angry, she doesn’t deserve to be spoken to in that way at work and is doing her best but can’t help him if he continues. Her active listening and reasonable request placates the customer, who apologizes, explains he is stressed because the item he is looking for is a last-minute birthday gift, and gratefully accepts her help to find a suitable substitute.

This communication style lends itself perfectly to being assertive, as she was able to look after her own rights while finding a win-win solution. She wasn’t passive by accepting the man’s bad behavior or aggression by losing her temper, so she didn’t compromise her own needs. Giving the customer an option to change his tone or leave the store rather than trying to control him further confirmed her assertive style and led to the best possible outcome.

Choosing to Be Assertive

You can identify which of the four communication styles you’ve adopted in any situation by noticing the types of phrases you’re using.

The passive communicator says, “People walk all over me,” and “No one cares how I feel about this.”

The aggressive communicator says, “I always get what I want—whatever it takes,” and “You’re worthless; you owe me.”

The passive-aggressive communicator says, “That’s fine . . . (That’s what you think),” and “They’ll see what happens to people who cross me.”

The assertive communicator says, “We’re both entitled to respectfully express our opinion,” and “I’m responsible for myself and no one owes me anything.”

Passive people suffer because they feel they have no control over other people. They don’t have the confidence to stand up for themselves or even add their opinion to the discussion, so they also lose all feelings of having control over themselves.

Aggressive people have control over themselves and feel they should also be able to control others. Using fear and bullying to subdue and dominate does work but only in the short-term. People go to great lengths to escape an aggressive person, and it only takes a small interaction for people to decide they’ll actively avoid them.

Forgetting that you are in control of yourself leads to the feelings of helplessness that drive passive behavior. A passive communicator will let others weaken or spoil what they try to do or allow them to make decisions on their behalf. Anger at how their passivity has caused people to treat them can turn into retaliation in the form of aggression, where they try to dominate others, or passive-aggressive behavior, where they stay weak but punish behind the scenes.

It’s normal to want to have command of yourself, and being assertive means acknowledging what you want while understanding no one’s under any obligation to provide it for you.

Passive people forget that they have a choice, but they have actually been making choices the whole time: it’s a choice to do nothing. It’s a choice to not speak up, to allow someone to bully you, and be forced into something you don’t want. The passive employee tells themselves they have to do what their boss says, but the truth is that they don’t, not really. Other people say no and they aren’t fired and blacklisted and run out of town.

Passive people don’t have perspective on the consequences of saying no. They assume it’s a deal breaker, a sure-fire way to destroy a relationship in one deadly word. People say no all the time without their whole world tumbling down around them.

Questioning what you want and determining if it’s about controlling yourself or controlling others can help you stay committed to behaving assertively. You don’t have to agree with or even understand another’s reasons and views to be able to respect that they have them. You can listen to their needs and decide for yourself whether or not you can assist them without having to devalue what they desire. There will be situations where you choose to go along with something that might inconvenience you, but it was your freedom of choice to decide to do so.

There are some things you can try today that will take you to the realm of the assertive style of communication. Using “I” statements when speaking up for yourself stops you from placing blame on others or trying to control them and keeps your focus on you. It’s assertive to say you disagree, but if that seems like a huge deal, start by refusing to let yourself give in and instead practice saying, “Let me think about that and get back to you.”

When you feel more confident, you can assertively say no. It’s fine to be a broken record if people won’t accept the answer you’re giving—just keep asserting yourself in the same way without worrying over excuses or justifications.