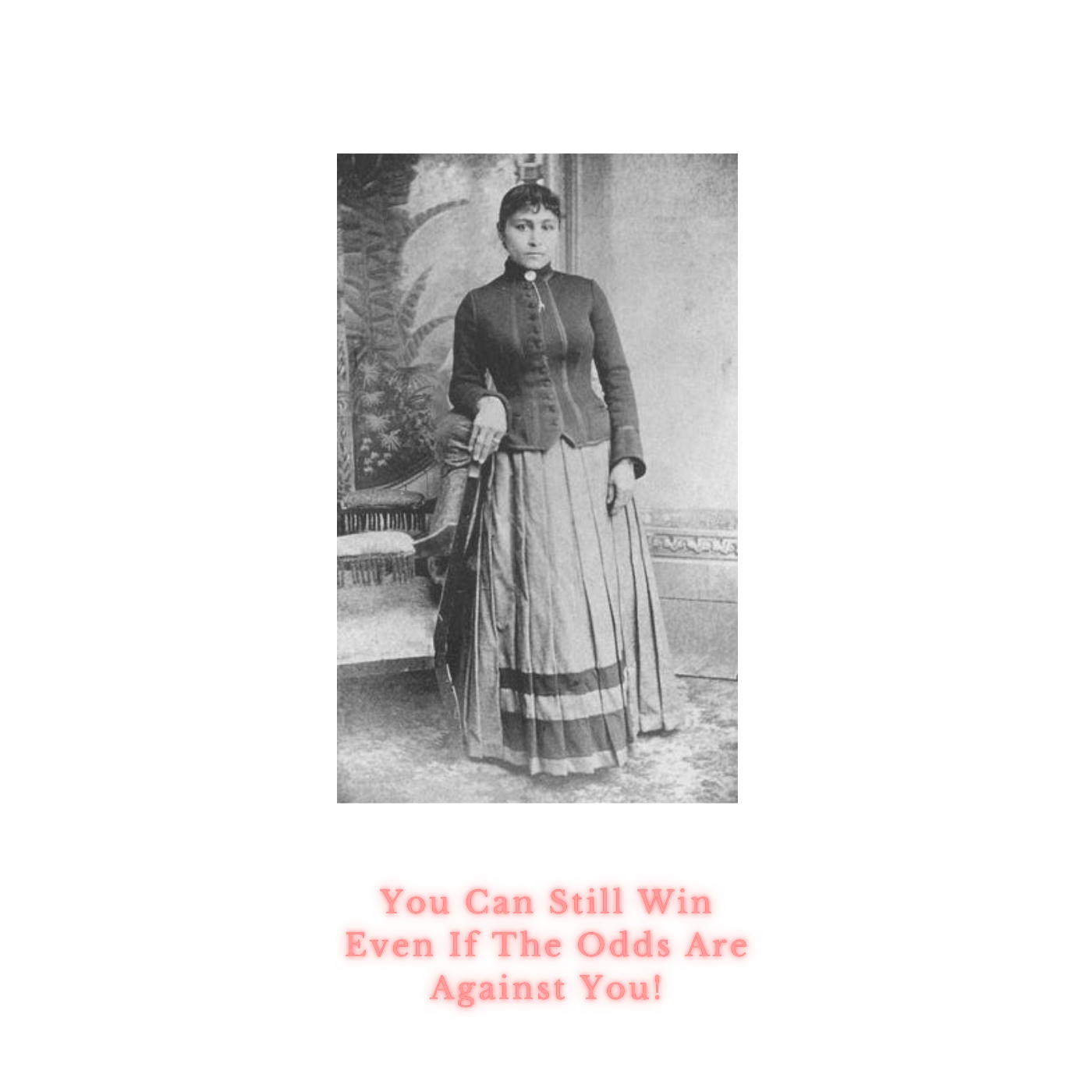 Most of us have encountered situations that challenged us to overcome incredible odds. Amanda America Dickson Toomer's story is riveting and I am sharing it with you tonight!

Are you a podcaster looking for potential sponsors? Check out PODGO.CO.

Good evening and welcome to my humble podcast abode. I am Cocoa Griot, that resident fifty-something who's here to share with you ideas about life love, and a host of other topics. Tonight I want to travel back in time a little and talk about a story that is really fascinating. I don't know about you, but I've had times when the odds were stacked against me, and I felt hopeless in some situations. I feel a little ashamed right now admitting that because I've never had odds stacked against me, like the woman I'm going to talk to you guys about tonight. Can you imagine being forced to deal with a 79 to one situation, but still fighting the battle anyway? This is the story of Amanda American Dickson Toomer. This is one of those stories from history that makes me believe in the power of right.

Amanda America Dickson was born in November of 1849. Her 40-year-old father was known as the prince of southern farmers. David Dickson was one of the wealthiest planters in Hancock County, Georgia. Amanda's father owned her mother, David impregnated Julia Francis Lewis Dickson when she was just 12 years old, Julia gave birth to Amanda at the age of 13. Amanda's time with her mother was very short because of David's plans for his only child. When Amanda was fully weaned, David took her into his home with every intention of affording his daughter privileges her mother would never have. The primary female influence in Amanda's life was her grandmother, Elizabeth Sholars Dickson. Even though Amanda's father and grandmother loved her dearly by all accounts, they could not emancipate the child based on Georgia laws.

Reading, writing and piano lessons were part of Amanda's daily life as a child. She spent hours on end in the company of her doting grandmother, Elizabeth. Amanda wore fine clothing, received lessons in social graces, and was referred to as Miss Mandy by everyone on the Dickson plantation. It is mind-blowing to fathom that Julia was her daughter's house servant. Added duties for Julia involved her continuing a "relationship" with David. David married 25- year old Clara Harris when he was 61, but he still carried on his "involvement" with Julia. Some accounts say that Amanda, being prepared to enter white society was frowned upon by many Hancock County residents. The Dicksons just ignored the scandalous talks around the family's decisions regarding Amanda's upbringing and Amanda lived a pretty charmed life until a father died. Well, Amanda declared herself an orphan. Now, this is amazing to me because she clung to her father's lifeless body on February 18, 1885. And it's stunning to think that she was 44 years old at the time, and she declared herself an orphan. Despite the fact, her mother Julia was very much alive, but Amanda's mind was whitewashed.

David's relatives set out to remind her of her place. David's immediate family assumed they would inherit his vast fortune, but they were wrong. Clara Dickson preceded her husband in death. David Dickson left around $30,000 for his surviving relatives. Amanda received more, much more! More than 15,000 acres in Hancock and Washington counties, 13,000 acres in Texas railroad stock, and rights to the seeds and compound formulas that he used to increase agricultural yields. But before I tell you about the battle royale that happened over all of this wealth let me go ahead and take a moment to recognize tonight's sponsor.

Tonight's podcast is presented by PODGO.CO PODGO.CO is the easiest way for you to monetize your podcast providing podcasters with a flat rate for airspace so you always know how much you get when you include an ad from PODGO.CO. Apply today to become a member and immediately be connected with advertisers that fit your audience. That's PODGO.CO, P O D G O . CO and be sure to add my podcast CocoGriot in the how did you hear about PODGO.Co section of the application.

Now, let's talk money and lots of it. Some estimates appraise David's worth at around $1 million. Now if you want to think about that purchasing power today, compared to 1885, that would be the equivalent to around $28 million dollars. David's only child Amanda was granted sole discretion in managing her father's property. So you know this would never do right? Let's talk about the assets that 79 of David's relatives contested the contents of his will. During the first trial, the family asserted a myriad of false allegations. The family sought to discredit Amanda and say she was not even David's daughter. There was no DNA testing in that day, but the resemblance is uncanny between father and daughter. I encourage you to look at the pictures in my show notes. In my Maury Povich voice. I'm gonna say, David, you are the father! A second allegation leveled against Amanda was that she tricked her father into making her the major heir of his fortune. Well, the court did not buy either argument. The jury ruled in favor of upholding David's will all but you know, they weren't going to let this rest.

Dickson's family members appealed the lower court decision, and the case wound up in the Georgia Supreme Court! This time the family argued fornication was banned and interracial relationships were a felony. So, the will should not be honored. Erasing Amanda's inheritance because of the circumstances of her birth did not turn out to be an easy task for the Dickson family. After a two-year battle with disgruntled relatives, Amanda's case was decided. The decision was based on law and not public policies the family cited as the basis for separating Amanda from her rightful inheritance. Under the 14th Amendment of the Constitution of the United States, all distinctions as to the rights pertaining to citizenship between the two races are abolished. And as to their civil rights, they stand on the same footing. This decision was handed down by the Georgia Supreme Court on June 13, 1887. In other words, blacks and whites were equal!

David Dickson educated his daughter so she was capable of fighting for her rights. Even though she was raised around white privilege; she was still a Black woman. We have to know our rights and be prepared to defend them, no matter what obstacles may arise. The constitution is not light reading by any means. I encourage you, dear listener, to familiarize yourself with the document that is the rulebook for our country. A mere 19 years passed between the ratification of the 14th amendment and David Dickson's death. If Amanda's father had passed away before the passage of the Reconstruction amendments, her fate most likely would have been different. If you would like to learn more about Augusta, George's first black millionaire, please go to the link in my show notes. Remember, odds don't determine the winner when the winner is determined. Thanks for listening this evening. And as always, I wish you good health, good fortune, and goodnight Cocoa Griot out!

Check out Amanda and David's resemblance-