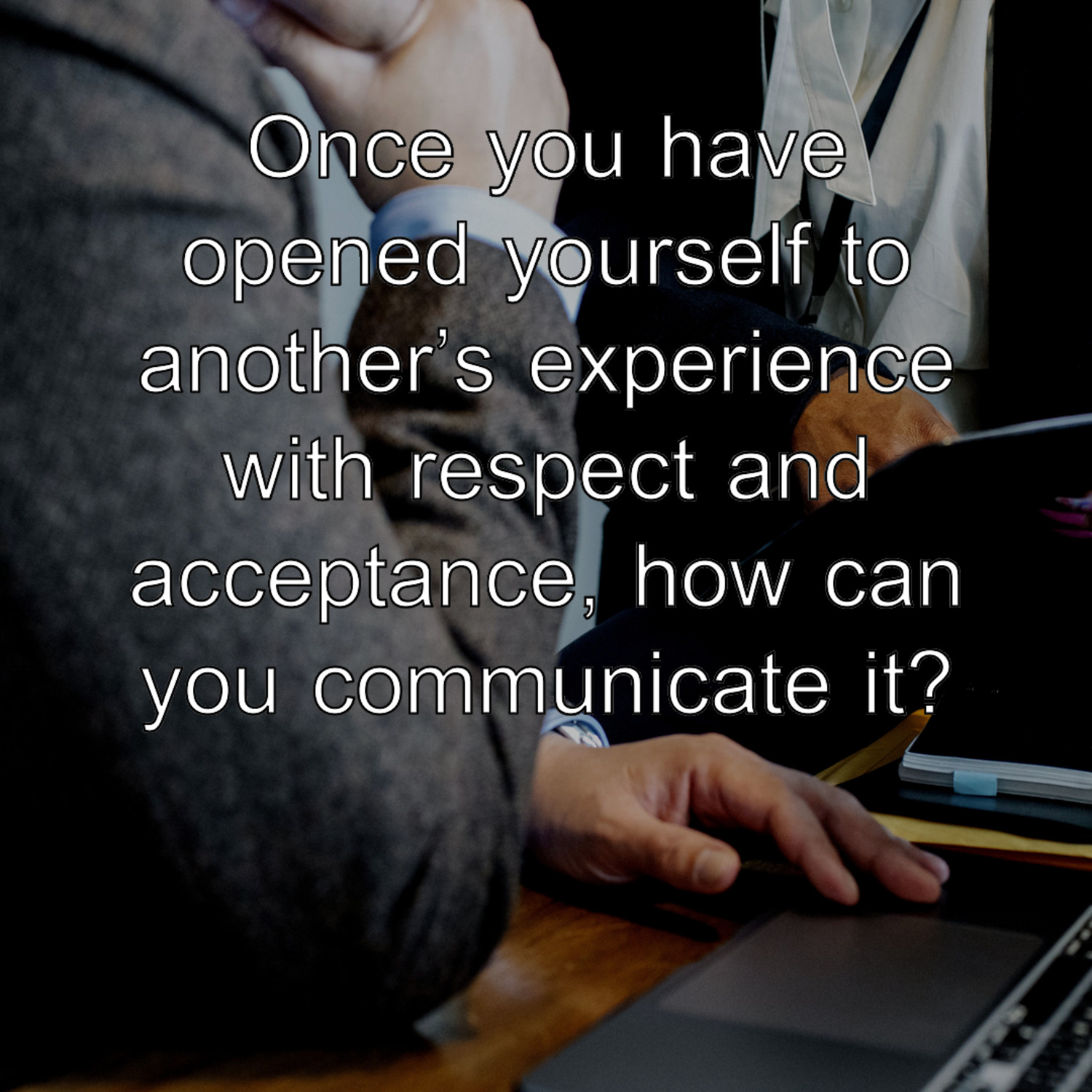 Lastly, our understanding is only worth something when we can communicate it well. Be careful in the verbal and non-verbal cues you send out. Respect boundaries when they’re asserted and try to remember the things that are shared with you.

Email the show at Podcast@NewtonMG.com or let us know what you think at http://bit.ly/pkcomment

Get the audiobook on Audible http://bit.ly/listenhearvalidateking

The question is, once you have opened yourself to another’s experience, and once you have stepped into it with respect and acceptance, how can you communicate it?

We can choose compassionate and careful language that shows our respect and understanding. We can share something of ourselves, so when we say “I understand” it seems like more than just words. We can ask insightful and thoughtful questions that show we are listening. We can remember the things that are shared with us. We can respect boundaries when they’re asserted, and take responsibility for times when we miss the mark. All these things are not just about caring, but showing you care.

Finally, something you might not have considered is that it is, in a way, our duty to others to be compassionate with ourselves. When we learn to self-validate, we become experts, and we can then take that mastery to others, bringing acceptance and validation to them. When we love and care for ourselves, we elevate all our relationships and interactions, and inspire others to self-validate, too. Empathy is not just a nice idea; it’s something we do, practically, every day.

Once you’ve done the work of generating empathetic and validating feelings, put them to work, and ask the following questions:

What does this person most need right now?

In what ways am I contributing to how they feel, and what part of the situation is my responsibility?

Have I been honest and open in expressing how I feel?

Have I set my own boundaries clearly, and am I respecting other people’s?

What could I say or do right now that would improve the situation?

Have I fully expressed my acceptance and openness to this person—in terms and language they will understand?

If you read more widely on the topic of empathy, you might find that all its different aspects are some version of one or more of the above three elements (the six-step validation process is an example).

We can understand each element as a progressive step, a process that starts within us and brings us closer and closer to others. Empathy begins inside us (1), then makes a bridge to another person (2), and eventually rests fully with them when we express our empathy (3). You may discover, in trying to practice, that you are better at one element than the other. Great! This can help you focus your efforts.

Let’s look at an example that uses all three elements. Let’s say Peter has a friend, Mike, who has wildly different political views from him. Because he values Mike’s friendship, and because he wants to be a more empathetic, understanding person in general, Peter decides to change his approach to the usual disagreements between the two.

Privately, Peter gets to learning more about Mike’s viewpoint. He reads unfamiliar news sources, and tries to really understand the arguments being made. He suspends his own judgment and tries to look with open eyes. Can he see the elements in Mike’s life that make these arguments appealing to him? As he reads and researches, he realizes something: Mike is a deeply principled and passionate person, who really only wants to do the right thing. Though they have different visions about what the “right thing” is, Peter realizes that he and his friend actually share this passion—it’s why they argue so much!

The next time they talk about politics, Peter is prepared. He leaves behind his judgments, biases and assumptions about what Mike believes. Instead, he asks him. Really asks. Mike is flattered by the attention and speaks more openly than he ever has before. He feels respected and actually listened to for the first time. Peter is pleased, and decides to take further action—would Mike be prepared to hear his side of things, too? Maybe he would be interested in reading some of Peter’s favorite books on the topic?

This story has all the elements of empathy working together: open-mindedness, stepping into another’s shoes and real, deliberate action.

Fast-forward a few months. Peter and Mike still disagree as much as ever. Neither has converted the other to their point of view, and nobody has “won.” But in a sense, they have achieved something more worthwhile: their friendship is stronger than ever, their connection more honest and open, and they truly see one another. This is the perfect example of how emotional validation supersedes agreement and harmony. When both people willingly see and accept the other, what does it matter that they disagree on the details?