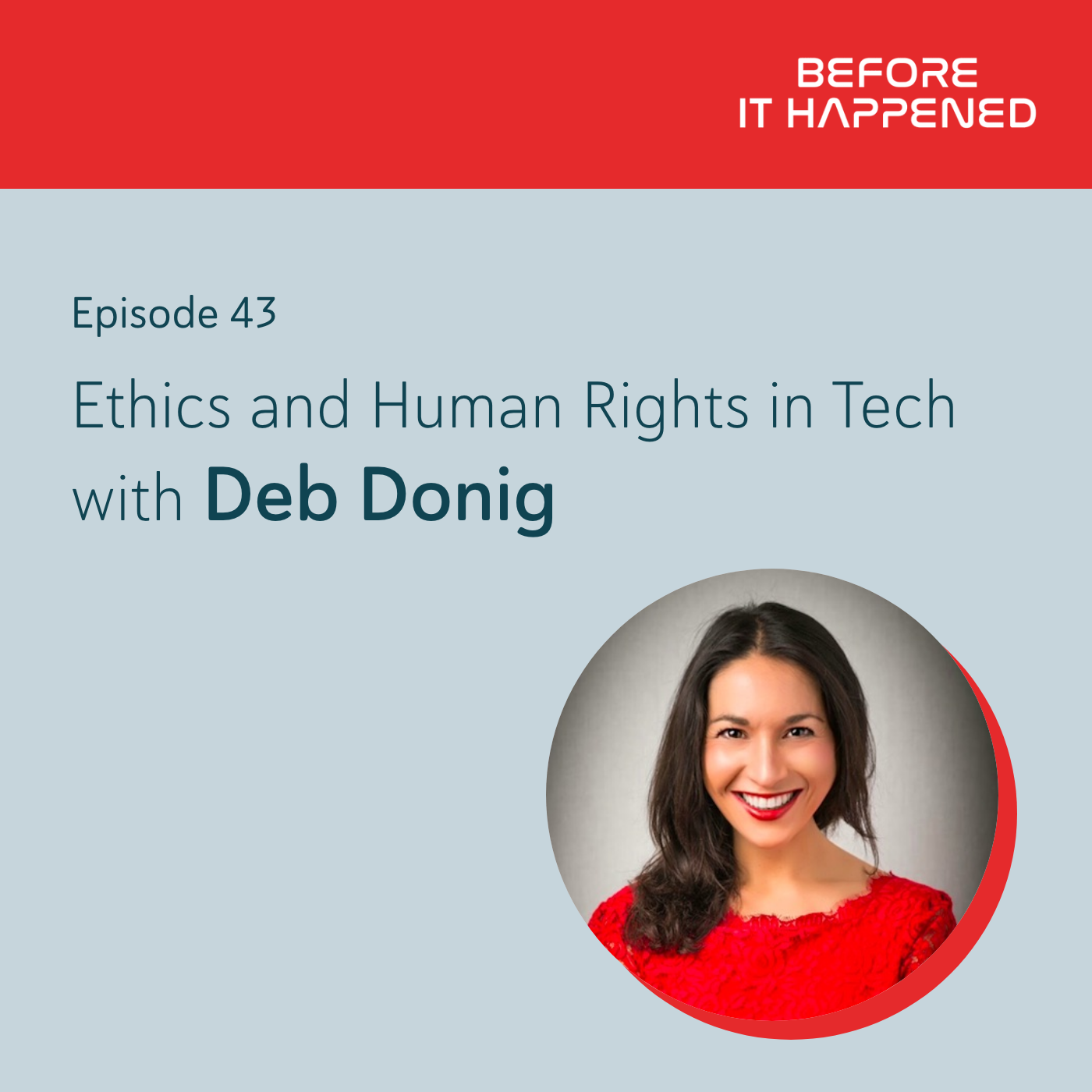 Technology isn’t neutral: all technologies were created with a purpose, says Dr. Deb Doing a literature professor at Cal Poly whose work focuses on the intersection between technology and human rights. What does it mean to be human in the age of tech? How does technology shape our future on a day-to-day basis? And most importantly, what about ethics and how we behave through technological tools? In an age where we depend so heavily on technology, Deb says we need to look further and ask developers to think more critically and act more ethically when developing their technologies.

(02:31) - Deb Donig on growing up and being encouraged to serve others - "I had instilled in me from a very young age that women can do everything, that our interventions are important, that we're valuable as professionals.”

(04:03) - Deb's mother's life growing up in South Africa during the apartheid - "In that tight period between the end of WWII and the beginning of the official institutionalized apartheid system, Jews weren't really either black nor white. They were in this indeterminate, intermediate space."

(07:17) - How Deb fell in love with literature, and her fascination for the non-human world -  "Sometimes I like to say that I will sit down to work and have my lap dog on one side and my laptop on the other side. I like to think about the symbiosis between those."

(09:25) - Deb’s Jewish heritage and her love of literature - “There's a saying that because Jews have historically been exiled and lived around the world, it’s said that Jews come together around shared textuality. For me, it's an intuitive part of who I am."

(12:48) -  Going back to her South African roots almost by accident - “I discovered a part of myself and a part of my family that I had never really encountered as an adult. I came back from South Africa, directed the New England Holocaust Memorial for a couple of years, and discovered there was a question about narrative. How do we remain, how do we tell the story?"

(21:18) - Can we build this… or should we? How Deb teaches young people ethics in technology as an English literature professor -   “I’m still trying to figure out the answer myself. What I say to them is that before we can build anything, we first have to imagine it. It matters how we imagine.”

(27:25) - On ‘ethics washing’ - “It doesn't matter how many ethical actors you have. It doesn’t matter how many people you hire. It's a matter of who the CEO is and what kind of priorities your company has built into it. You can’t put an ethical prosthetic on your company.”

(32:13) - The dichotomy between how technology can support and hurt us  - “A phone can be a distraction and it can be an attention suck, but it can be a life-saving mode of connection at times, both in terms of our mental and physical health.”

Listen to Deb’s interview on the ‘Jewish History Matters’ podcast: Ethical Technology and the Holocaust with Deb Donig

Before IT Happened is produced by Donna Loughlin and StudioPod Media with additional editing and sound design by nodalab. The Executive Producer is Katie Sunku Wood and all episodes are written by Jack Buehrer.