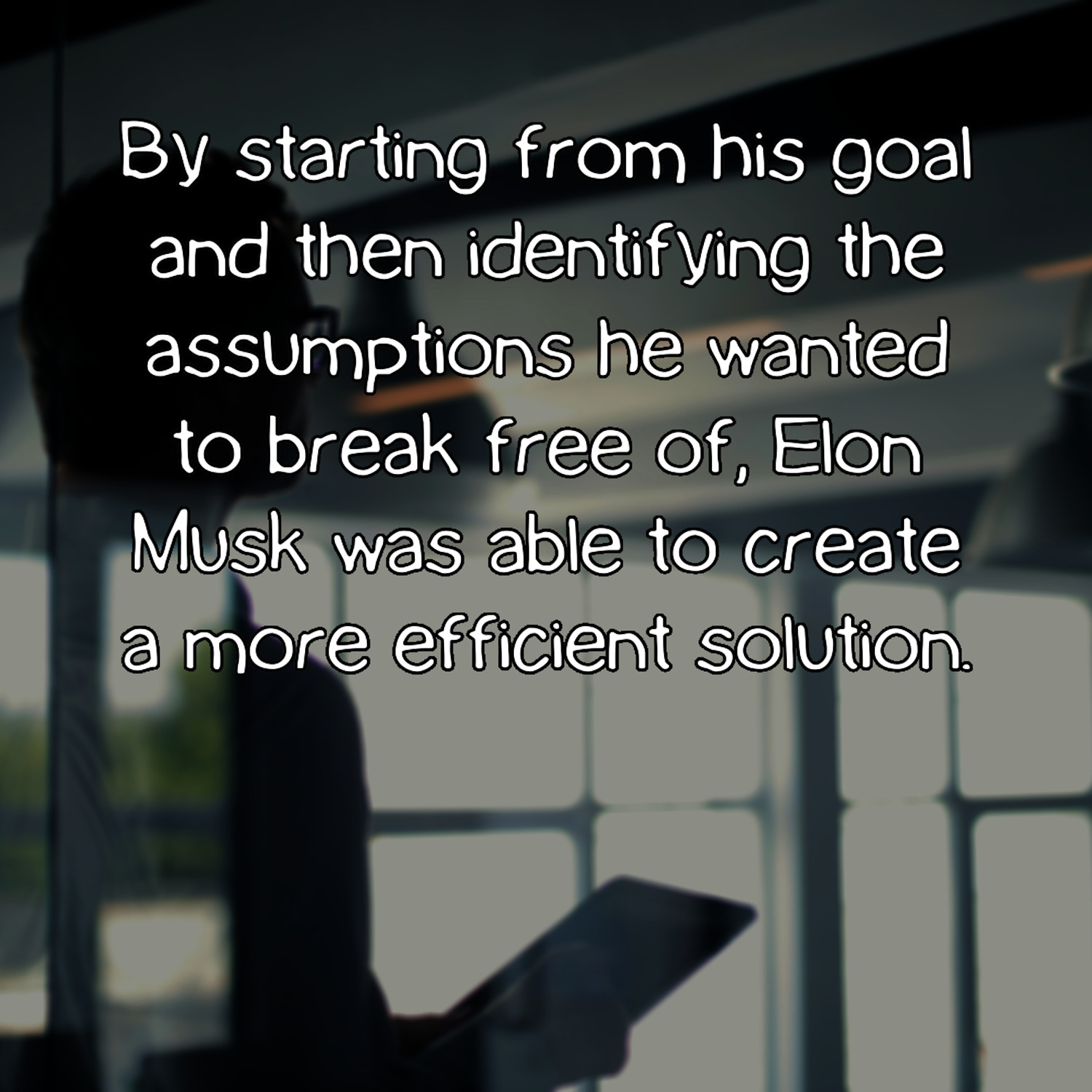 Some of the greatest thinkers of human history have shared many similar opinions on how to think. That’s no coincidence, and I’ll trust them, especially when there is a consensus. Clear thinking starts with deconstructing what you think you know, understanding that you know nothing, and then building up from there. It’s tough and tedious, to say the least.

Elon Musk and his usage of first principles thinking is all about rejecting what is thought to be fact. He describes a process where you identify your assumptions in the face of solving a problem, you break them down, and then you solve the problem by breaking down old barriers. Once you realize that truth is not as set in stone as you think it is, possibilities begin to unfold. Reinvent the wheel—because maybe you can find a better one.

You don’t have to take it from me. In fact, the basis of clear thinking would dictate that you seek to confirm what I say and discover further evidence to support my views on thinking. Thus, I urge you to seek out additional sources and perform your own due diligence. To that end, I have compiled some thinking methods of some of the greatest thinkers in history.

It turns out that many of them share this trait in common. When we seek to confirm information today, we seek verified sources or call on the work that others have performed. But often in the case of the majority of history’s greatest thinkers, they themselves become the source material upon which people reference. They have nothing to guide them, or to point them in the right direction.

This means they had to define their own direction and methods of research in order to be able to determine anything. Combine that with whole new areas of inquiry, and you get a process that is necessarily clear and evidence-based. Just imagine that to many of these thinkers, they were setting out into a vast wide ocean where they had to set their own courses and draw their own maps; these days, we are sailing into pools with articulated lanes and directions for us to swim in.

All this is to say that none of these thinkers skipped any steps, and you probably shouldn’t either.

Although you wouldn’t categorize Elon Musk as a “historical” thinker, he’s well on his way with his growing list of achievements. He’s certainly not responsible for originating this method of thinking, but he’s applied it in publicly-renowned ways.

Musk asks the simple question: How can we be sure that we are not building our thoughts on a proverbial house of cards? Welcome to first principles thinking, which is stripping everything about a problem away until you only have the basic components.

Much of the thinking and analysis we do rests on the backs of other people’s accomplishments, discoveries, and assumptions. We’ll see how someone else does something—builds a bicycle, makes a cake, writes a song, opens a small business—and, more or less, copy what they did and just add a few things to improve it. We don’t think much about them, and we follow suit for various reasons, one of which is “it’s just the way it’s always been done.”

Another is that there’s a result that proves it works, and thus why should we reinvent the wheel? We just don’t give much thought to what underlies something that works, and we go so far as to trust that it’s the best way sometimes. At the very least, it’s safe and not prone to failure. This is a well-disguised form of intellectual laziness.

It may not be innovative or original, but following a proven guideline works. Or does it?

This is known as analogy reasoning, and it works, but is prone to errors and mistakes because you follow a path like gospel while underlying assumptions aren’t questioned. Imagine if you were told that a cake has a certain amount of flour and eggs, and you simply emulated the recipe without questioning if it were true. This recipe may have been handed down for generations, but perhaps it was simply codified because one grandmother down the line only had so much flour and eggs available to make the cake. Perhaps this actually creates a rather gross-tasting cake, and if you deviated, you would improve the flavor and moistness tenfold.

The point is that what we think we know about a problem or scenario is often based on a set of assumptions. Assumptions aren’t always correct. We assume that flour and eggs in a specific ratio create the best-tasting cake, but is it true? You just might be the blind following the blind. (Sorry to all the grandmothers.)

First principles thinking is the practice of getting behind this tendency to follow, and to question everything you think is set in stone and realizing that they are probably assumptions.

A first principle stands alone. Reasoning by first principles removes the impurity of assumptions and conventions. This method strips away the opinions and interpretations of other people and gets you to the essential elements that exist. From there, you can then build back up to a solution, often with an entirely new approach, based on truths that are unimpeachable and indisputable—because you are not resting on any assumptions anymore.

Thus, breaking Grandma’s cake down to first principles would be to first examine what is actually needed to bake a cake and in what proportions. Only then could you start to recreate the cake to be tastier, and you might find that different proportions and ingredients are needed. It sounds like an easy solution, but sometimes it just doesn’t occur to us that not everything is set in stone.

We also aren’t conditioned for this type of thinking because of the sheer inconvenience it presents. First principles thinking is often discouraged, in fact, whether intentionally or not. Think of a child who keeps asking his parent a series of questions.

How do plants live? “They depend on sunshine and sufficient irrigation.”

Why? “They need the sun’s energy for growth, and they need water to create food.”

Why? “So the plant can conduct photosynthesis.”

Why? “Because that’s just the way it is, kid! Here, let me put the television on for you.”

That child is attempting to practice first principles thinking, although he probably doesn’t know it. And his parent is shutting it down because, well, he doesn’t really have time to go into it right now, it’s too inconvenient. That scenario continues when we reach adulthood, whether it’s a boss who bellows, “Because I said so!” or someone who says, “That’s just the way it is.”

Enter Elon Musk: the South African technology entrepreneur who is modern culture’s most known and ardent champion of first principles thinking. Musk has been behind some of the most futuristic, forward-looking tech developments in the last 25 years, and espouses first principle thinking in everything he does. Musk has long resisted the analogy thinking that purports that something can’t be done just because it hasn’t been done yet. He fervently denies being told “that is impossible.” Sure, it might be impossible according to their first principles and assumptions, but not his.

You can think of it as perpetually reinventing the wheel—which itself is a phrase mostly used to discourage people from doing so!

There is one particular example of this thinking method in action. When Musk sought to create SpaceX, a privatized space company, he quickly ran into the reason that all other privatized similar efforts had failed: the massive cost of rockets. Being that the business of SpaceX would be to send rockets into space, this was quite a roadblock.

But his price estimates rested on analogy thinking and the rigid thinking of so-called experts. He applied first principles thinking and broke down the real costs of getting into outer space, through buying a rocket or making his own. He quickly found that the price tag of the rocket wasn’t what it seemed. Instead of buying a finished rocket for up to 65 million US dollars, Musk decided to insource the process, purchase the raw materials, and build the rockets himself. Within a few years, SpaceX had cut the price of launching a rocket to a fraction, by some reports 10% of his earlier estimates.

Musk used first principles thinking to break the situation down to the fundamentals, and simply asked what was needed to get into outer space. A rocket—that answer didn’t change. But the rocket didn’t have to come from Boeing or Lockheed, or any of the other established aerospace manufacturing companies. By starting from his goal and then identifying the inherent assumptions he wanted to break free of, he was able to create a more efficient solution. You start by asking, “What are we 100% sure is true and proven? Okay, let’s disregard everything besides that.”