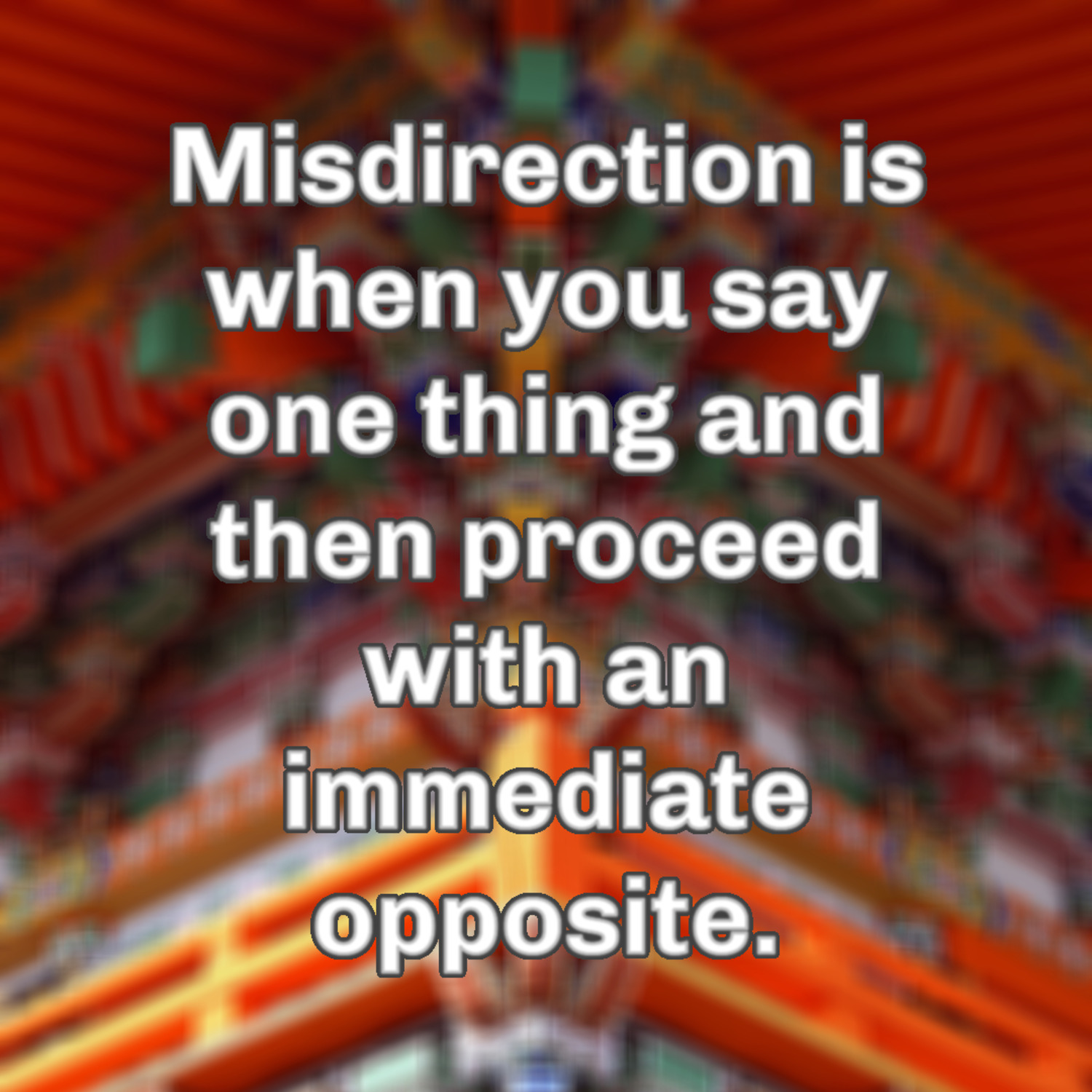 The final technique is all about dissecting misdirection and how it can lead to big laughs. First, we start with sarcasm and irony. Sarcasm is when you say something you don’t mean in an attempt to make fun or ridicule something. Irony, on the other hand, refers to situations where something happens that is the opposite of what you’d expect. This is more observational humor on your part, because you would be pointing out a contrast rather than creating one. Irony has a surprising amount of versatility because of the many places it can be applied. You can be on the lookout for ironic contrast between words and body language and tone, ironic hyperbole, and even use an ironic simile for yourself (lightweight as a brick).

Misdirection is when you say one thing and then proceed with an immediate opposite. For example, “It’s a secret, but let me tell you immediately,” or, “That show is great, except for everyone in it.”

It seems confusing, but what you are doing is breaking a sentence into two parts.

You’re stating something in the first part, then contradicting it immediately in the second. People won’t immediately be sure of what you mean, and part of the humor comes from this introduced confusion. You have both positive and negative, or vice versa, in the same sentence.

The second part of the sentence is the element that people will react to, while the first part is typically the setup. The second is your true sentiment on the topic.

This formula is the secret to the humor in such lines as George Jessel’s “The human brain is a wonderful organ. It starts to work as soon as you are born and doesn’t stop until you get up to deliver a speech.” Douglas Adams also used it when he said, “I love deadlines. I like the whooshing sound they make as they fly by.” Here’s another example: “I love dogs, but I hate seeing, hearing, and touching them,” or, “This juice is awesome. Did it come from the garbage disposal?”

Why does misdirection work?

Most of us try to be polite to people. We use euphemisms frequently, and we don’t say what we really feel. The first part of a misdirecting statement is what people expect—politeness. Then, you contradict yourself and give them a dose of reality, which sets up a humorous contrast since you have deviated from what most people expect and would say themselves. As you might have observed, ironic similes also make use of misdirection to derive comedic effect.

Last but not least, misdirection is a funny way to express your feelings on something. If you really feel X about a topic, then use misdirection! “Opposite of X, but actually X,” will almost always be received far better than “Gosh, I hate X.”

Sarcasm is a way for people to say things without saying them, and is the most common way we use misdirection.

Think about how Chandler Bing from the television show Friends talks. If he says something is wonderful, he says it’s wonnnnderful in a tone that immediately lets you know that he thinks the opposite.

Sarcasm functions like a social cue—both are ways to express something without having to explicitly say it. In that way, it’s a great device for handling uncomfortable topics or pointing out the elephant in the room without directly offending people (or pointing). It allows us to walk a tightrope, as long as we don’t fall into the pit of passive-aggressiveness.

At some level, most of us can appreciate sarcasm because we know what is being accomplished. It can even be the basis for your own personal brand of humor. Standup comics often use it to great effect.

Chances are, you are already using sarcasm regularly without being fully aware of it. Sarcasm is mostly used as friendly banter with a friend or acquaintance with whom you are comfortable saying something negative. For example, consider that you’ve committed a minor gaffe at work, for example forgetting to return a borrowed file before it’s due. If a close colleague teases you about it, you may reply with a sarcastic, “Oh yes, this is scandalous! This would for sure be in the headlines tomorrow!” But if it’s your strict boss who sternly calls you out on it, you would not be likely to make a sarcastic announcement in response.

Sarcasm is usually used to poke fun at someone or something, and is heavily context and audience-dependent. If you are around somebody who enjoys wit and has a sarcastic sense of humor, it will be quite welcome.

But around others who don’t share the same sense of humor, are less secure, or don’t like you, it’s too easy for them to interpret your attempts at sarcastic humor as a full-fledged insult. They might just think that you are an insulting jackass. That’s not what you’re aiming for here.

Using it in the wrong context will cause people to think you lack empathy or, worse, get your jollies from hurting other people’s feelings. There will be others who simply won’t get the sarcasm, no matter how obvious you make it. They won’t be insulted, just very confused. You’ll want to avoid both outcomes.

However, choose the correct context and sarcasm can make you more likeable and charming. It also makes you look intelligent and witty. In some social circles, appropriate levels of sarcasm are not only welcomed, but required.

Now that you have a clearer idea about the proper context of sarcasm, the next step is to articulate the elements to make sure you don’t just insult people left and right in your attempts at building rapport. If your annoying coworker understood sarcasm better, they might be as funny as they think they are.

For the most part, sarcasm is saying the opposite of (1) an objective fact, (2) a subjective emotion, or (3) thought.

It makes a contradictory statement about a situation to either emphasize or downplay its effect.

Sarcastic statement: Bob, you are the busiest man I know.

Subjective emotion or thought: It is hilarious that Bob plays Tetris at work constantly.

Sarcastic statement: Bob deserves a medal for worker of the year.

Objective fact: There is a surprising amount of traffic lately.

Sarcastic statement: What are we going to do when we get to our destination super early?

Subjective emotion or thought: I hate traffic so much.

Sarcastic statement: This traffic is the best part of my day.

That’s the first and most common use of sarcasm. Now let’s lay out a framework for different types of sarcasm and exactly when and how you can use it. You’ll be surprised how formulaic and methodical you can get with this, and subsequently with humor.

When someone says or does something very obvious, you respond by saying something equally obvious.

Bob: "That road is very long.”

You: "You are very observant."

You: "I see you're a meteorologist in training.”

Poor Bob: "This menu is huge!”

You: “Glad to see you’ve learned to read!”

The next application of sarcasm is when something bad happens. You say something about how that good or bad event reflects on the other person.

Bob: "I dropped my coffee mug.”

You: “You've always been so graceful."

You: "Now I know who to call when my calculator breaks."

You observe Poor Bob dropping a cup of coffee and state "You would make a great baseball catcher. Great hands!"

Proper delivery is crucial for sarcasm. This can mean the difference between people laughing at your sarcastic joke, or thinking that you're serious in your sentiment and branding you an overall jerk. Also keep in mind that sarcasm is perhaps the most overused technique to create humor. Use it sparingly, but effectively.

You have to make it clear that you're being sarcastic and give others a sign indicating so. Otherwise, people will feel uncomfortable at the uncertainty. Are you just being mean, or are you trying to be funny?

The most common way to do this is with a combination of a deadpan vocal tone and a wry smile or smirk. With deadpan delivery, you don't laugh while you're saying it; you appear completely serious. Then, you break into a smile to alleviate the tension and clue others in to your true intention.

Now that you know when to deliver sarcastic remarks, it’s also important to learn about how to receive them and be a good audience. Let’s pretend that you are Poor Bob from earlier, and insert a reply for him.

Bob: "That road is very long.”

You: "You are very observant."

You: "I see you're a meteorologist in training.”

Poor Bob: "This menu is huge!”

You: “Glad to see you’ve learned to read!”

Redeemed Bob: “I can also count to ten.”

You need to amplify their statement and what they are implying. Does this look familiar? It’s a self-deprecating remark + a witty comeback!

When you respond to sarcasm this way, it creates a greater bond. Everybody is comfortable, and you create a funny situation and potential for greater banter.

And just as important, you don’t come off as a bad sport or someone who can’t take a joke.

However, there is a downside when dealing with sarcasm. A lot of people who rely on sarcastic humor, pretty much on an automatic basis, are actually masking passive-aggressive personalities. They're constantly using sarcasm as a defense mechanism to hide their true feelings. They use sarcasm to pass off their otherwise negative emotions. They might be doing this to you, so it’s important to know how to sidestep their subconsciously vicious attacks.

In such cases, responding with sarcasm will only encourage them. It indicates that misusing sarcasm in that way is acceptable. If you find someone being overly sarcastic with you in ways that are passive-aggressive, approach them and politely convey that their sarcasm feels hostile, even if they didn’t intend it to be so.