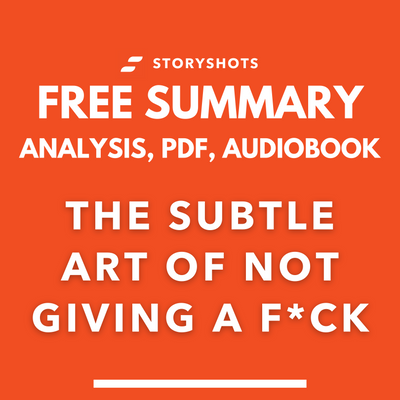 The Subtle Art of Not Giving A F*ck by Mark Manson | Book Analysis, Summary and Rating | Free Audiobook

Life gets busy. Has The Subtle Art of Not Giving A F*ck been gathering dust on your bookshelf? Instead, pick up some of the key ideas now. We’re only scratching the surface here. If you don’t already have the book, order it or get the audiobook for free on Amazon to learn the juicy details.

Learn or review the key ideas of The Subtle Art of Not Giving A F*ck by Mark Manson in minutes, in text, audio, and animated formats for free: https://go.getstoryshots.com/a9Bn

Mark Manson is an American self-help author and blogger. He started his first blog on dating advice in 2008. It became hugely popular and gained hundreds of thousands of readers. In 2009, Manson decided to travel the world for the next seven years while working remotely. He ended up visiting more than 65 countries. In 2010, he started a new blog called Post Masculine which provided general life advice for men. On this blog, he posted an article under the same name as this book. The article was so well received he decided to turn it into a book. The Subtle Art of Not Giving a F*ck went on to become a New York Times best seller.

Manson has been featured on NBC, CNN, Fox News, the BBC and Time magazine. In October 2018, Penguin Random House announced that Manson would work with Will Smith to write the actor's autobiography. Manson’s work has been translated into more than 60 languages.

The book has sold over 13 million copies. According to Amazon, The Subtle Art of Not Giving a F*ck was the most-read nonfiction book in 2017.

Before he became a famous author, Bukowski was an alcoholic gambler who was frequently rejected by publishers. It was not until Bukowski turned 50 that an editor finally accepted a piece of his work. The public and media described his story as the American dream. But Bukowski knew the reality: He was still a loser. He wasn’t a best-selling author. He was fine with this, though. This self-acceptance is what drew so many people to him and his books. Bukowski has the words “Don’t try” written on his gravestone.

This approach is entirely different from modern society’s expectations of how we can become happier, richer, healthier and more successful by merely wanting it. Manson believes this approach means we will feel like we are never enough. True happiness is caring only about essential matters.

The Backwards Law was introduced by the British philosopher Alan Watts. The idea is that the more you pursue feeling better, the less satisfied you become. Constantly pursuing satisfaction will reinforce that you lack it in the first place. Manson rephrases this as:

Shot #2 - Stop Believing You Are Unique

Manson believes that self-help books and modern society are obsessed with the idea that we are all unique. This idea has created a society of entitled people who expect everything to go right for them all the time. Entitlement is feeling as though you deserve to be happy without sacrificing for it. There are two types of entitlement:

Both of these types of narcissism end up the same as they behave in the same way. They are deluded about where they lie in the social hierarchy and both think everything should be catered to benefit them. This means they are completely self-absorbed.

A study from the late 1960s correlated positive self-image with accomplishments in life. Based on this study’s findings, policymakers started to use things like participation prizes and unattainable goals to try to motivate children. Manson believes this single study has created a society that does not accept reality. The issue with not accepting reality is that people no longer use their problems as a stepping stone toward their success.

Self-help books often focus on the goal of constant happiness. Manson suggests this idea is harmful. As humans, we are naturally slightly unhappy. Dukha is a Buddhist principle that claims life is suffering. We are supposed to experience unhappiness. It helps us push on and look to achieve genuine success.

Take responsibility for your emotions and understand that tackling negative emotions is a daily struggle. Problems never stop; they just change. Manson applies this to the psychological concept called the “hedonic treadmill.” This is the idea that once we acquire what we believe will make us happy, we just find another problem. So, we should be aiming to solve problems in our lives rather than avoid them. We should not be aiming for a life without problems but a life full of good problems.

Shot #4 - Happiness Is a Science

Manson believes that life and happiness are related to the scientific method. Your values are hypotheses, your actions are experiments and the outcomes are data. So, we should make smart decisions based on results rather than fear, doubt or uncertainty. Uncertainty is a vital rung in the ladder to success, and we should not fear it. Uncertainty is what allows us to learn more. Uncertainty helps us understand our values are imperfect, so it guards us against extremist ideology. It also removes the judgment and stereotyping of other people.

Shot #5 - Values Are Essential For Happiness

Many Japanese soldiers ended up stranded on many of the Pacific Islands during the second world war. These soldiers were cut off from the rest of the world. So, they did not know that the war had ended. As a result, they continued to fight the war into the 1950s, 60s and 70s. It did not matter how strong, intelligent or motivated these soldiers were; they were destined to fail. Manson uses this analogy to highlight that without the correct values and goals leading your actions, you are f*cked.

Your deepest emotions are related to your values. And the values you fight for determine who you are. Good values are vital for your happiness, but we often focus on bad values. Chasing empty pleasure and believing that you are always right are examples of bad values. Good values are reality-based, internally achieved and socially constructive.

To support this point, Manson offers the example of guitarist Dave Mustaine. In 1983, he was kicked out of Metallica just before their big break. Mustaine spent the next two years perfecting his guitar skills. He was then able to start the band Megadeth, which would sell over 25 million records. But this success was not enough. Mustaine continued to compare himself to Metallica, who have sold over 125 million records. This meant he was still unhappy. Manson then compares Mustaine to Pete Best. Best was also kicked out of a world-renowned band: The Beatles. Watching The Beatles’ success did leave Best depressed for a while. But he ended up far happier than Mustaine because he came to a simple realization: music is more important than success. Mustaine had bad values, while Best had good values.