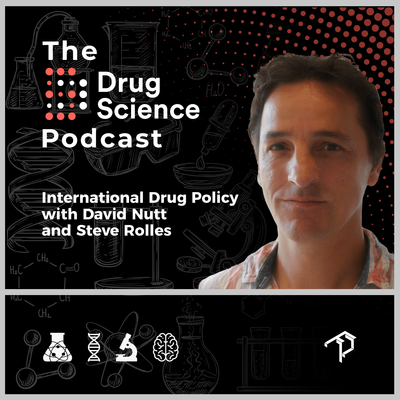 In 1971, the war on drugs went international when the UN Convention on Psychotropic Substances was signed into international law. This Convention broadened the scope of previous UN drug legislation, facilitating the prohibition of almost any drug imaginable at the time.

However, in the past 50 years, various countries across the world have been rejecting this narrative and even the UN itself has agreed that the war on drugs has been a failure. Drugs are here to stay and it was foolish to think that they could be removed from society. An influential cog in this new approach to drug policy are a group called - Transform. Transform take a pragmatic and evidence-based approach to drug policy. Lobbying for harm reduction and alternatives to prohibition.

Steve Rolles is Senior Policy Analyst for Transform Drug Policy Foundation, a UK based think tank and charity focused on drug policy and law reform. Lead author on a range of Transform publications including 2009’s ‘After the War on Drugs: Blueprint for Regulation’, Steve has been a regular contributor to the public debate on drug policy and law for over 15 years; in the media, at UK and international events, and at various UN and Government forums around the world. Steve was recently an adviser for the Uruguayan Government in developing their new cannabis regulation model, and was also lead drafter and technical coordinator for the recent ‘Taking control: Pathways to Drug Polices that Work’ report from the Global Commission on Drug Policy. Previously Steve worked for Oxfam and the Medical Research Council, having studied for his Geography BSc at Bristol University and Development Studies MSc at Manchester University.