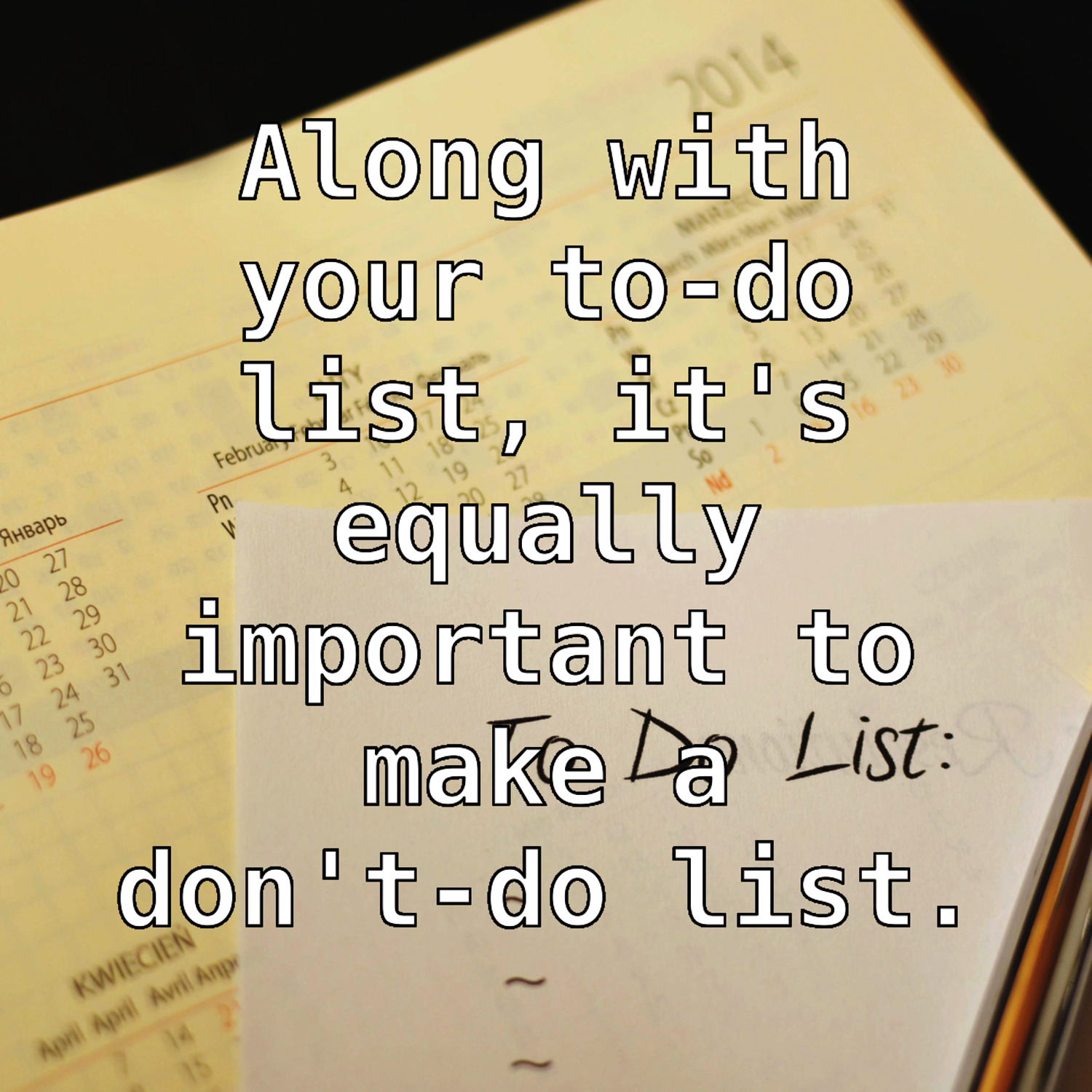 Mental Model #22: Avoid To-Do Lists. In fact, construct don't-do lists. Narrowing down what you should be avoiding, and what really doesn't matter, will drastically free up your time. This means you will have less stress and anxiety and know exactly what your priorities are.

Sometimes when we're struggling to get started, it's because we can't choose what to fixate on. Too many things have the potential to command our focus, and sometimes we can't differentiate between what we should avoid and what actually deserves our attention.

Everyone knows the value of the to-do list, but this isn't as helpful as you might think because everyone inherently kind of knows what they should be doing and when they need to do it by. The act of writing it down just helps remind them. This makes them more likely to do what they know they should be doing - more than if they didn't have such a list.

The underrated problem most of us deal with is that we can't prioritize, and thus we don't know what we should and shouldn't be doing. Each day, we're faced with choosing tasks that will create the biggest impact for us, and there are many hidden obstacles. Thus, along with your to-do list, it's equally important to make a don't-do list.

The contents of a don't-do list might be surprising. We all know the obvious evils to avoid when trying to boost productivity: social media, goofing around on the Internet, watching The Bachelorette while trying to work, or learning to play the flute while reading. These are tasks with clearly zero benefit toward productivity.

You need to fill your don't-do list with tasks that will sneakily steal your time and undermine your goals. These are tasks that are insignificant or a poor use of your time, tasks that don't help your bottom line, and tasks that have a serious case of diminishing returns the more you work on them. They are useless, but it can be difficult to distinguish between real tasks and useless tasks, and it will require some hard thought on your part.

Perhaps like with the other anti-mental models, we will be able to narrow down our priorities just by eliminating what doesn't belong. This works well when paired with the Eisenhower Matrix from an earlier chapter.

There are a few categories of tasks that belong on the don't-do list.

First, include tasks may be priorities, but you can't do anything about them at present because of external circumstances. These are tasks that are important in one or many ways but are waiting for feedback from others or for underlying tasks to be completed first. Put these on your don't-do list because there is literally nothing you can do about them, so they are just clogging up your mental bandwidth.

They'll still be there when you hear back from those other people. Just note that you are waiting to hear back from someone else and the date on which you need to follow-up if you haven't heard back. Then push these out of your mind, because they're on someone else's to-do list, not yours.

You can also temporarily push things off your plate by clarifying and asking questions of other people. This puts the ball in their court to act, and you can take that time to catch up on other matters.

Second, include tasks that don't add value as far as your priorities are concerned.

There are many small items that don't add to your bottom line, and often, these are trivial things - busywork. Can you delegate these, assign them to someone else, or even outsource them? Do they really require your time? In other words, are they worth your time? And will anyone but you notice the difference if you delegate the task to someone else? By taking on the task yourself, are you getting stuck in the weeds of perfectionism? These tasks are just wasted motion for the sake of motion and don't really matter in the big picture.

You should spend your time on big tasks that move entire projects forward and not myopic, trivial tasks.

Third, include tasks that are current and ongoing but will not benefit from additional work or attention paid to them. These tasks suffer from diminishing returns.

These tasks are just a waste of energy because while they can still stand to improve (and is there anything that can't?), the amount of likely improvement will either not make a difference in the overall outcome, or will take a disproportionate amount of time and effort without making a significant dent.

For all intents and purposes, these tasks should be considered done. Don't waste your time on them, and don't fall into the trap of considering them a priority. Once you finish everything else on your plate, you can then evaluate how much time you want to devote to polishing something.

If the task is at 90% of the quality you need it to be, it's time to look around at what else needs your attention to bring it from 0% to 90%. In other words, it's far more helpful to have three tasks completed at 80% quality versus one task at 100% quality.

When you consciously avoid the items on your don't-do list, you keep yourself focused and streamlined. You don't waste energy or time, and your daily output will increase dramatically.

It would be like reading a menu with food items that are unavailable. It's pointless. By preventing your energy level from being dissipated by those things that suck up your time and attention, a don't-do list enables you to take care of the important stuff first.

The fewer things that tug on your mind, the better - the kind of stress and anxiety they create only hampers or kills productivity. A don't-do list will free your mind of the burden of having too many things in the air because it eliminates most of those things. You can focus on the balls that are still in flight and steadily knock each one out.