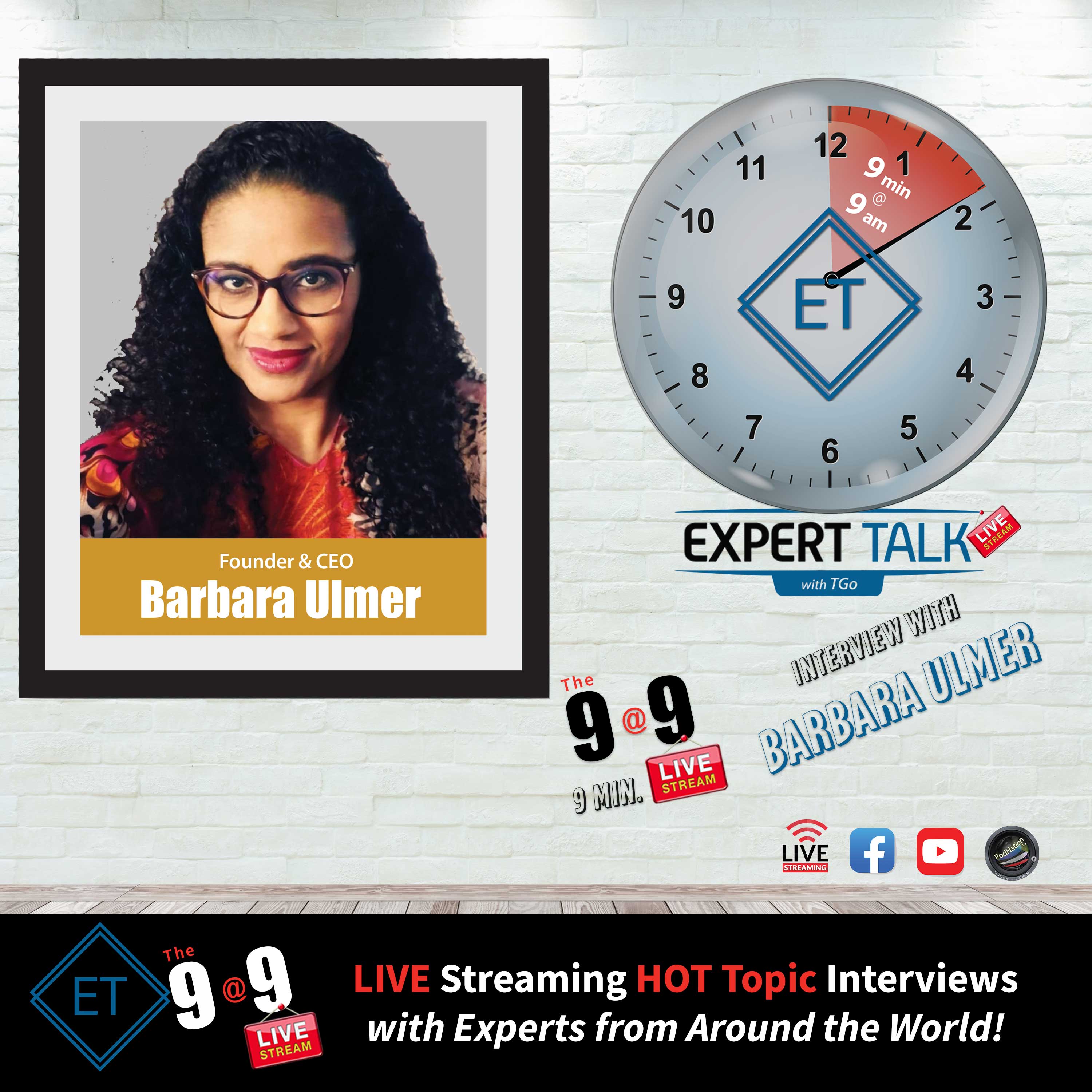 Barbara is the Founder of BU Language and Learning Center. She's taught German in Oxford, England and studied French in Paris. Worked as the Head of the French Department in Charlotte, NC and Houston, TX and also taught German to the US Air Force. Barbara's latest programs are Language Immersion Classes for children with a playful approach to inspire and encourage young learners. But now She faces the ultimate challenge... Can Barbara really teach TGo German?

Hey everybody, welcome to the show. You know where you are? The 9@9 with me TGo. And today we're going to kind of challenge TGo a little bit. I'm going to talk to myself in third person. I met this person at Secret Knock and you guys know I've been bragging about it. I got, I got a chance to go to Secret Knock.

I got a chance to be on stage. It was the most amazing event I've ever been to. And I met the most amazing people. One of those persons was a woman named Barbara Ulmer. Now she says she can teach me German. I expressed to her that I took three years of German back in school in Chicago. And I remember absolutely nothing of it.

So we're going to see if she can really teach TGo me in the next couple of minutes. Maybe like one word. Hey Barbara, are you out there. Yes I am. Hello TGo. There we go. There we go. So welcome to the show. Let's start. Thank you for having me very happy to be there. No, you are your original first language is German or English.

It is German. It's my mother tongue. Okay. Okay. So what got you into languages? Cause you speak several languages, not just German, not just English, what else? Yes. I speak German, English and French. I have my masters in all three. And the main idea was because my father is from Nigeria. So I always felt I want to be able to speak with everybody from Africa.

So I figured if I studied English and French, that's going to be perfect because I will be able to speak basically to everybody because they either speak French or English has main language. That's amazing. Now, how do you use your masters? Are you teaching or do you have a language program? How, how are you using these wonderful languages in your business?

Yes, I I'm actually, I have my own business. It's called BU Language and Learning Center and I teach from young age all the way to adults. So there's no age limit. I have a playful approach for the really little ones. I use dolls with those dolls. It helps them to stop the language without any fear and they can speak through the doll.

And I speak through the dolls, which is a lot of fun. And for teenagers. Yes. And then yes, I have another program to empower them. So in essence, I give them another language which is out of school. Like you said, you studied German in high school, but they have the opportunity to pick something they're just interested in.

Like I have French students that study French because they dance at the Houston ballet. I have German kids that have a German Mom and an American Dad, so they don't want to lose the language. So I teach them and that is a great opportunity for them. And that's what I like to do. And then also for adults, of course, That's amazing.

And that's what I wanted to take. And of course those classes were gone and they said, well, the only thing that has left is German. And I went, I'm never going to Germany. What do I need German for? And they said, well, you got the choice because if you went into this program, you actually got out of school,

has some benefits at elementary school. Cause you went to this program. And I said, I didn't want to miss that. So I started taking German. I took it in seventh, eighth and ninth grade. And that was 40 plus years ago. So I don't remember a thing, but I meet people that speak multiple languages. And I've got one question for you.

No, absolutely not. It's never too late. You can always start. And if you have an idea or reason to do it, or if it's just for fun or for business, you can always start. Yes. You know, I did a lot of business in Hong Kong and I was amazing to me what the kids curriculum was because they were learning three and four languages before they got out of elementary school.

And that just blew my mind. Can you learn too many languages? No, I don't think at all, I had this experience with this really, really little kid and I taught him, which was interesting. The Mom, she spoke Spanish and French, the Father spoke English, but he had German heritage. And so I taught him French in the morning,

German in the afternoon. And when I left my shift, the after care nanny spoke Spanish to him and it actually worked well. He literally, even with the same phase, it didn't surprise him that at the middle of the day after his nap, all of a sudden the language changed. And then after his next nap, the language changed again on his development was out of this world.

Like he literally, I played piano on those plastic pianos with him and he used it as a walker. Like at seven months he started walking and that wasn't even my intention. I was like, okay, let's play some music. And he made it into a Walker and the parents came and picked him up and they said like, oh my God, this language training is advancing him too quickly.

What's happening. That's amazing. That's amazing. Okay. Before we, before we, cause this is a really quick interview, it ends in about three minutes and our engineer, our producer doesn't play around before we get out of time. I've got to ask you, you know, as a techie, as a web designer and an app developer and all that,

there's these little buttons on our stuff now that says, you know, multilanguage and usually the language is all wrong in some parts here in some parts there. How is these technologies? These artificial intelligence coming along affecting, you know, someone like yourself, who's business is language. Are you finding more work because we need you to fix it? Or is it messing with your business?

Actually, it's more so helping. I literally like, even when I watch Netflix, I correct the subtitles because I feel it could be done better, but we still have to take some jobs TGo Oh, like, did it hit me? Hit me? How do I say good morning? Guten Morgan? Guten Morgen Yeah. Guten. Morgen. That's easy.

oh, you going to learn this? I gotta have you come back and do a full interview. Can really get into it before he cuts us off. Tell everybody how they can find you. If they're listening and not watching. Okay. You can find me on LinkedIn and a BU Language and Learning Center. My website is BULanguage.now.site and under my name,

you will also find me if you just Google me Barbara Ulmer it'll pop up under my name as well. All right. She's proven it. I can learn German. So I'm going to have her come back on. We're going to talk and maybe who knows? Maybe soon we can do a whole episode. Okay. Let's not get crazy. That's the plan. I love challenges.

We'll do that. That's scary. Thank you so much, Barbara, for being on the show. I can't wait to have you come back. This was a blast. Same here. Thank you for having me TGo Hey, what you guys don't know is my producer can hear me today. So he couldn't cut me off. HaHa! Hey everybody. Thank you for watching.

I hope you enjoyed this episode. I hope you'll come back next time. And as always I'm TGo. I'll talk to you, maybe in German next time. See y'all soon.