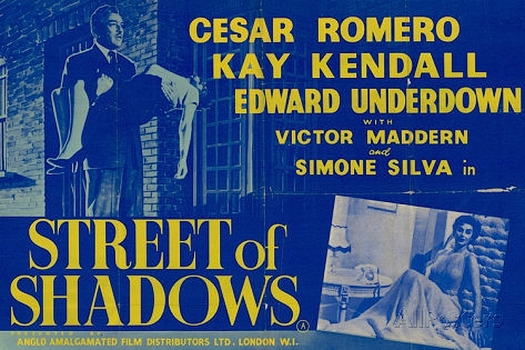 Episode 2: Street of Shadows (1953) and Jessica Martin on her late father, Ido

In our second episode, we discussed little known ‘B’ film Street of Shadows (AKA Shadowman in the US Market) which was directed by Richard Vernon and released in 1953. The film imports American star Cesar Romero (CESAR ROMERO! Who starred in everything from ‘The Thin Man’ to ‘Batman’) as an Italian immigrant who owns a pin-table saloon in Soho and is falsely accused of murdering his ex-girlfriend. The film has some great sequences shot on location and even a shot of the Marquis of Granby pub in North Soho. Kay Kendall co-stars and the ubiquitous Victor Maddern gives a memorable performance.

We were joined by Mel Byron to discuss the film. Mel is a comedian, writer, trainer and one of the three person team who makes and presents the Talking Pictures TV Podcast.

We also chatted to Jessica Martin, actress, singer, artist, author/illustrator and impressionist about her father Placido Martin (known as ‘Ido’ to his friends) who was a musician and bandleader who operated in Soho during the same 50s/60s period. Her latest book Life Drawing: A Life Under Lights is available now.

Street of Shadows is available from Amazon.