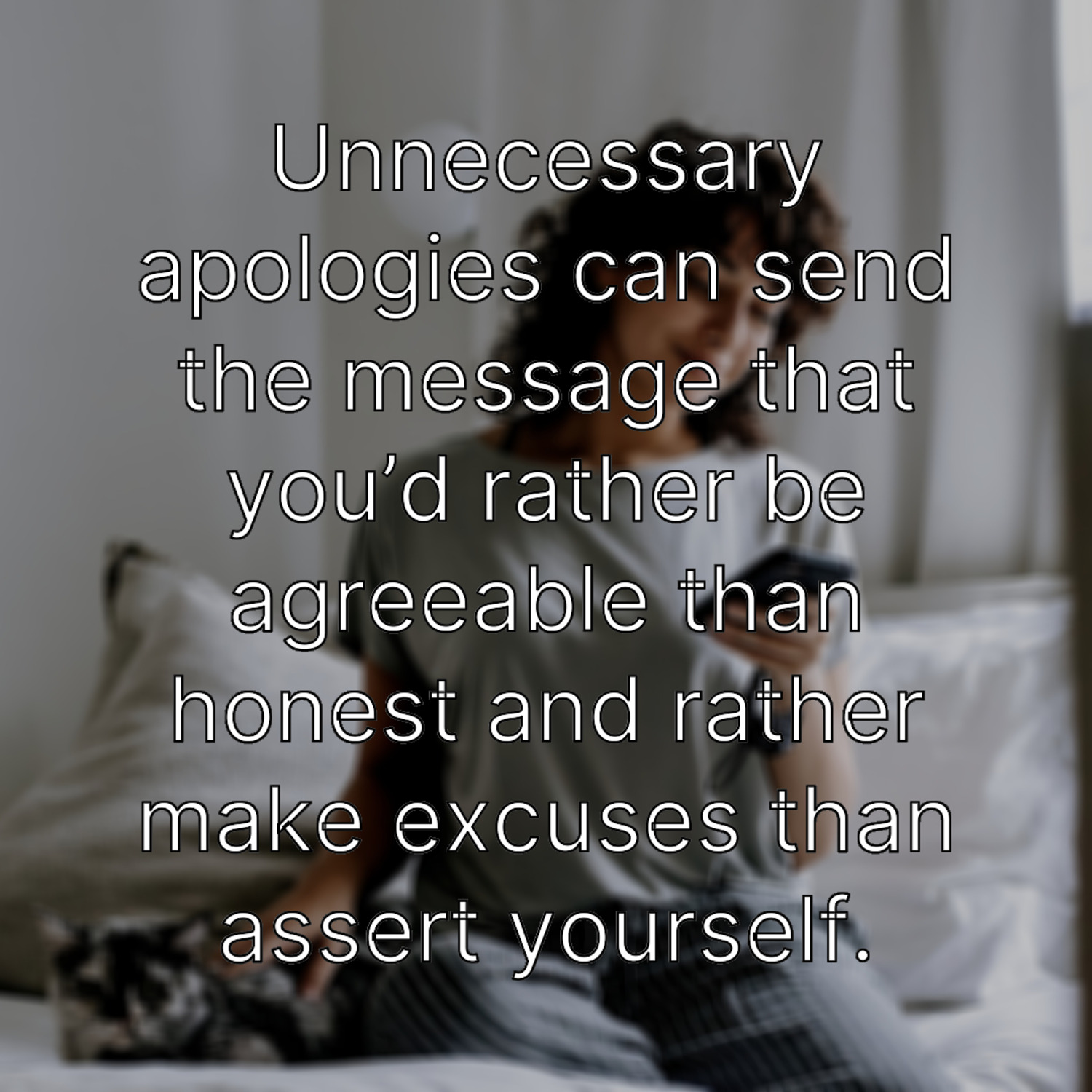 Apologizing is the opposite of assertiveness—at least when you do it out of instinct like many of us are prone to do. Over-apologizing, however, does give a peek into how you view yourself and the patterns youve been exposed to. We are all products of our past experiences, and many have told us that apologies and not making waves is the best way to get through life unscathed.

The Need To Apologize

Do you find yourself apologizing often, even in situations most people would think unnecessary? Does the word “sorry” live on the tip of your tongue? Do you utter it frequently, even when you’ve done nothing wrong?

Many of us over-apologize as an instinct. As a child, you might have learned to avoid conflict or were expected to take someone else’s blame. Maybe your parents taught you that it was polite, or they expected you to own up to your mistakes.

The word “sorry” has become something we reactively utter. Whether or not we actually commit an offense, it just slips out. Though it seems like a harmless habit, it can actually lower your self-esteem, justify and reinforce others’ poor actions, and potentially turn you into a pushover. There’s no shame in apologizing for a mistake or wrongdoing. But what happens when saying sorry becomes an automatic response to anything that makes you feel even slightly uncomfortable?

You might apologize when someone else bumps into you at a bar or club. You put your hands up and smile to show that no harm was done and find yourself scrambling to say “sorry.” Even though the other person spilled half of your expensive drink on the floor and you don’t actually feel sorry, it seems like the appropriate response. As you imagine this situation, ask yourself if it was courteous to do that. Which result did you want to achieve by using that word? The compulsive “sorry” that escaped your mouth probably wasn’t an apology. It was just a way to avoid confrontation and a possibly awkward situation.

By “apologizing” like this, you tell others you are taking responsibility for the issue. That person at the bar may now assume it was your fault that the spilled drink almost came into contact with their new pair of shoes. In trivial situations such as this one, it doesn’t really matter who was at fault. But when over-apologizing becomes a habit, there is an increased likelihood of it occurring in situations that do matter. You can imagine how this affects your assertiveness.

Unnecessary apologies can send the message that you’d rather be agreeable than honest and rather make excuses than assert yourself. Doing so frequently could make you come across as submissive or a pushover. This could make you a potential target for being taken advantage of at work and at home.

Over-apologizing also creates an unnecessary sense of guilt and can undermine your own self-worth. When apologizing becomes second nature to you, not only do you remind others that you’re responsible for what goes wrong, you’re also directing that information to yourself. It’s like volunteering to be the scapegoat and even trying to get others to reinforce it as fact. The cycle continues when you start feeling worse and people blame you even more.

Before you start to apologize, stop and ask yourself two questions:

“Did I actually do something wrong?”

And if not, “Did I really want to communicate that I think I did?”

Apologizing could also be the result of a genuine desire to demonstrate respect. It becomes a problem, though, when holding others’ opinions or reactions in overly high regard. One thing to remember is that we are all human, and we don’t have to put any one person or ideal on a pedestal. Those well-intended attempts at politeness can sabotage us years later by turning into a people-pleasing addiction.

A tendency to over-apologize may also stem from an aversion to conflict. People turn to it as a means of claiming responsibility in hopes of making a problem disappear. This “preemptive” peacekeeping strategy—regardless of whether or not you are to blame—can wreak havoc on your self-image. At home or in the workplace, you could be making yourself look incompetent or even annoy those around you with regular negativity and self-deprecation.

Imagine a situation in which you would have to confront an overbearing or highly critical boss. You become nervous as you get closer to his office. When you enter, you see that he’s just getting off the phone. As he hangs up, he looks up at you and asks, “What?” As you scramble for the right words, the word “sorry” naturally jumps off your tongue.

By the time you get your sentences straight, the conversation is over and you realize that half of your sentences were made up by this apologetic word. Maybe you were trying to protect yourself from rejection. Perhaps you were intimidated by his blunt speaking style. Whatever the case, your request probably wasn’t fulfilled because saying sorry got in the way.

Sometimes, we’ll throw an apology into situations where directness and confidence are key, such as asking for a raise. What kind of impression do you give others when you start a sentence with “sorry”? Here are some examples:

Phrases like these litter our speech, and each time we use them, we weaken our own voices. There is no need to be afraid of rejection or being called a jerk. Go ahead and say what you mean and ask for what you want. You don’t have to apologize for it, nor do you need to water it down. If you’re new to this, you might get mixed reactions. It might make others confused or even angry at first. Don’t worry about this. When you say what you mean, people will learn to hear you out. They’ll soon begin to understand and respect you.

When you need to make a serious statement, nothing takes away the gravity behind your words faster than saying, “I’m sorry.” An apology can make demands sound like requests. Don’t be alarmed if you find yourself deflating your sentences like this. Just realize that you are not communicating as clearly as you could.

Many people allow themselves to become products of their experiences. Though our experiences help shape who we are and in which direction we grow, we can also develop habits like over-apologizing. This could be in reaction to a buildup of bad past experiences.

You may want to ask yourself a few of the following questions:

What’s the first reaction you have when someone tells you no?

Are you afraid of rejection? Do you immediately feel discouraged when you hear no? Whenever you talk to someone, you risk being rejected or criticized. But it’s even riskier trying to avoid rejection or criticism completely, because you’ll never give yourself the chance to understand what someone means. No could mean “no, not right now, but later yes,” or “no, not this, but something similar could be a solution.”

Was advocating on your own behalf off-limits in your family? Was it encouraged?

If you got into an argument with a parent or sibling, were you allowed to talk back, or did you have to hold it in? Maybe you had to live with someone who always had to be right. Perhaps you had insensitive family members who refused to apologize about anything. Your apologetic reactions could be “making up” for their sense of pride.

When you were younger, was it acceptable to speak up and share your opinion?

Growing up, were your views taken seriously? Perhaps your parents or older siblings talked down to you and minimized what you had to say. Now, you find yourself downplaying your own thoughts and even apologize for coming up with an idea or suggestion.

What other major experiences shaped your outlook regarding asserting yourself and respecting authority, particularly at the workplace?

Do you find yourself intimidated by a particular manager or coworker? You probably had a parent or other family member with a strong personality. Now, you find it difficult to assert yourself or make requests around such people, as they may remind you of the personality types that were present in your childhood.

You can accomplish clearer and more accurate communication by simply changing your vocabulary. When you identify who or what makes you apologize most, you can turn awkward moments into a trigger point for your new phrases. For example, after becoming aware of your habit, you might switch from saying sorry after bumping into others to excuse me. You can still be nice without subjecting yourself to blame upfront.

Over-apologizing is often a side effect of a conflict-avoidance pattern that has been hardwired over time.

If you were raised in an abusive family or felt you had to hide your ideas or the way you are, you probably grew tired from the consequences of disapproval. Learning to avoid confrontation then came naturally as a way of coping. Although you might think that you’re getting around conflict, you really aren’t. We’ll often say yes when we mean no because we don’t trust that someone making a request can cope with rejection. It’s easy to avoid your true feelings, especially if you have difficulty doing well under pressure, don’t have emotional stability, or tend to over-dramatize how a discussion or argument will go before it happens.

For example, a coworker might ask you if you want to switch shifts. Depending on which coworker it is, it might be harder or easier to say no. If the coworker seems excited and very sure that you’ll take the shift, it may be difficult to say no or to say no without saying sorry. You could even subscribe to her request out loud but regret your words deep down.

Part of becoming more assertive is getting better at dealing with conflict. Every confrontation might feel like a miniature conflict: big and scary when you’re first thrown into it. But once you start to ask questions and gather more information, not only will tense situations be diffused, but you may also even come to an agreement or find out where there might have been a misunderstanding.