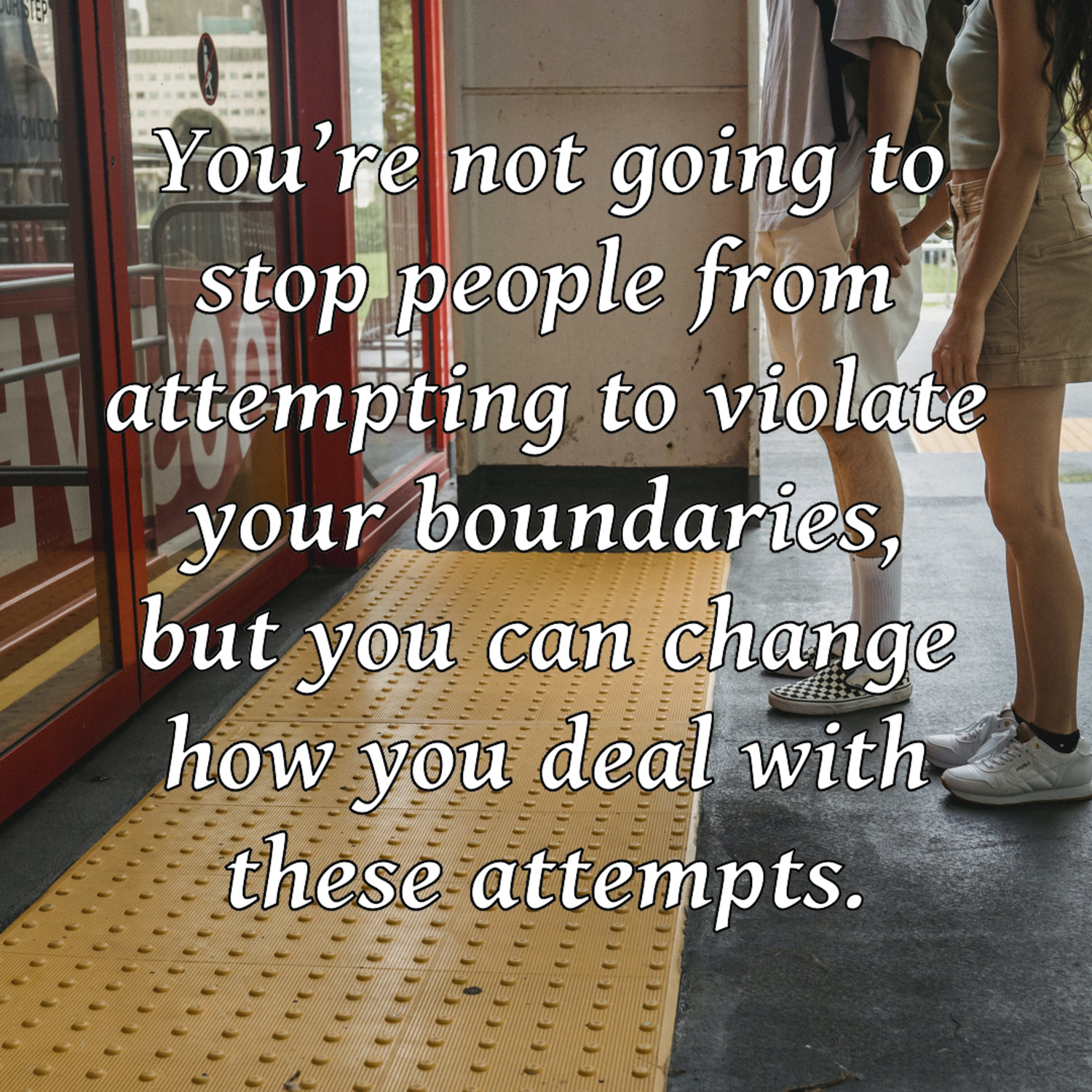 Strong and clear boundaries will be one of your best defenses against people-pleasing and the people who would have you do so. However, they can’t exist solely in your head, and they can’t be so flexible that people see no reason to abide by them. Thus, you must define them based on your values, and then communicate them clearly and enforce them without exception.

The other major aspect is setting consequences and then enforcing them. This is what happens when someone attempts to violate your boundaries after you’ve communicated them. This is can be whatever you want; the only thing it cannot be is nothing. Failure to do so will create porous boundaries, which are as good as no boundaries at all. However, they also cannot be too rigid.

While reaffirming your values and getting ready to set boundaries, you might think to yourself, ‘This situation would be better if my friends/partners/parents/children/coworkers would accept my way of thinking. If everybody could see it my way, there’d be no problem at all.’

It’s human to want that. When we come across a solution, we want to tell everybody about how we’ve fixed ourselves: “I was messed up! I’m not messed up anymore! You’re still messed up! You need to do exactly what I did!”

But we’re not responsible for changing the behaviors of others. Not only that, but it’s simply not under our control or up to us. What you can and should change is how you deal with other people. You’re not going to stop people from attempting to violate your boundaries, but you can change how you deal with these attempts.

This means changing your personal approach based on those core values we’ve just discovered and acting in a way that communicates boundaries. It means communicating in a different way with people you’re having issues with. It also means standing your emotional ground with people who are being overly aggressive with your personal space.

Let’s say someone you’re close with is a compulsive over-spender. They’re always buying things they don’t need. They occasionally ask for loans but always seem to have a lot of stuff or go on vacations more than a broke person should.

You know if this person would just adopt more stringent budgeting practices they’d change their ways. If only they paid closer attention to their bank balance or got better at planning their financial future, just like you have. In fact, you’re going to march over to this person’s apartment with a copy of Budgeting for Dummies, and you’re going to tell them their lifestyle is a highway to financial insolvency and bankruptcy—right?

Well, no. You’re not responsible for this person’s problems. You do not have the time to spend fixing them. You have your own things to deal with. But what you can do is not give them money anymore. You can only change your behavior to not enable or support other people’s behaviors. You are only a part of someone else’s mental calculus.

Altering how you deal with others is a much more rewarding exercise than trying to convert people to your way of thinking. Anytime you can work on your own initiative and do something transformative for yourself, it’ll be much more effective and fruitful for your own health.

Set the consequences. So what happens after somebody’s ignored your limits and happily trespassed into your personal space after you’ve told them to respect your boundaries?

The answer: whatever you want. Within reason, that is. You’re not entitled to start a street fight or hack their computer. But you are entitled to stand your emotional ground and defend your personal space in a way that your message gets heard. To do that you have to decide what the consequence will be when someone goes past your boundaries. The only thing you’re not allowed to do is nothing.

For example, let’s say there’s someone on Facebook who’s continually hounding you about a dispute they’re having. You’ve offered warnings to him about pestering you in a public forum, but he keeps doing it. So you decide upon the consequence of un-friending or blocking him from your feed.

This part can be a big, hard step for you emotionally. It’s an anxious moment. But it’s part of setting your boundaries. This is about your needs and yours alone. Those are the needs you have to respect. If someone’s crossing that threshold continually despite your admonitions for them to stop, you have to lay down the law for yourself.

You can expect them to react unfavorably, of course. They might call you judgmental, short-sighted, unfair, rash, or irrational. Count on them being that way. Simply consider it part of the process of setting the consequence. But don’t let it change your decision.

Another great step to take when setting consequences is writing them down ahead of time. I recommend writing things down for pretty much any situation, but it’s especially good to do here. Write down the boundaries you have, the actions others might take that trespass those boundaries, and exactly what you will do when they’ve violated your boundaries. Writing is good for organizing your thoughts and to remind you what you’ve decided if you need to in the future. It’s often difficult to make sound decisions when we’re emotional or fearful, so knowing what we’ve previously decided with a clear mind can help us act.

Having a firm policy about the consequences of going over your limits help you develop more resolve and self-respect.

Get clear and specific on what your boundaries are. You’re the one who decides what will work for you and what won’t. When you’re setting up and explaining your boundaries, you have to be as explicit and direct as you can about them. It’s impossible to get someone to respect your boundaries if you’re not clear on them yourself. For example, if you don’t know that you resent people eating at your dining room table and leaving a mess behind, how will they?

You’re allowed to make different boundaries for different people in your life. Not everybody has to follow the same slate of rules and regulations; they can vary according to how close certain people might be to you. It’s one thing when a family member or close friend asks if they can borrow your car, but it’s quite another when a casual buddy from work or the bar does so. If you feel you need to adjust the boundaries for some and not others, that’s your call.

Finally, people might not understand why you’ve set up certain limitations, rules, or boundaries. That’s completely okay. They don’t have to. They’re your decisions. If other people don’t understand that or feel that your rules go against their personal emotions or values, it matters not one bit. Don’t worry about ’em.

Communicate your boundaries to others in very exact terms. Make sure everybody’s very, very clear on what your limits are (especially if they’re different for various people). You have an obligation to be clear, candid, and forthright with others about what your boundaries are. You can’t assume they’ll just guess correctly.

For example, people keep crashing on your sofa. Every weekend, someone you know stays out late and doesn’t want to drive back to their home for whatever reason. So they knock on your door, ask if they can crash, you back down, and 15 minutes later your sofa’s closed for the night. And there’s also a fair chance they’ll sneak something from your fridge while you’re asleep. It takes personal space away and probably eats a little bit of your time as well.

You probably haven’t made it expressly clear that this arrangement no longer works for you. You haven’t set this boundary clearly, preferring to passive-aggressively hint that you’re annoyed and prefer to not have this happen. So they’ll keep doing it because they don’t know you have a problem with it. Until you state without equivocation what your boundaries are, folks are going to keep traipsing right through them.

Some people will get it if you just drop a slight hint. For example, take that story about Alexa and Daniel, the guy who asked too-personal questions. Alexa may have expressed her boundaries by simply responding, “Why do you ask?” Many people will pick up on that clue and back off, leaving your boundaries intact.

Others aren’t quite as intuitive, and if they keep on not taking the hint, then it’s time for you to be explicit and direct with them. This is the tough part. Alexa could have said something like “I don’t like to discuss that,” “I’m not going to do that,” or “Please stop harping on me about this topic.” That magic word “no” is a direct way to defend your boundaries. Similarly, to defend your couch, you can offer, “This isn’t going to work for me anymore,” or “This is last time you’ll be able to do this without X,” or just, “This isn’t going to happen again.”