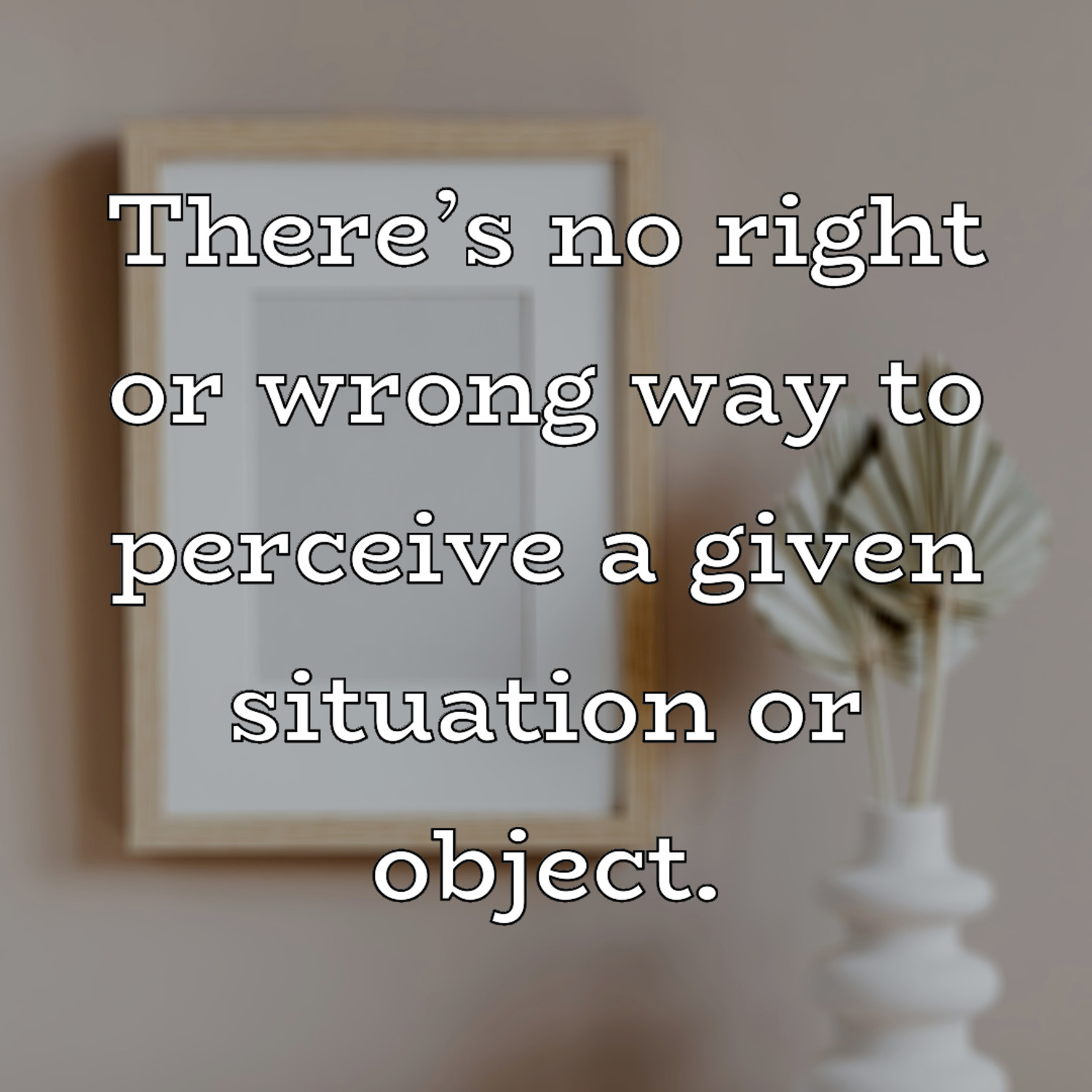 Your perspective isn’t reality. It represents your subjective and unique worldview, but it’s not objective, it’s not reality, and it is destined to be skewed in terms of your experiences. Some experiences are solidified in what are known as schemas and heuristics, which are the frameworks you use to organize and understand the world.

Now that we’ve articulated that feelings aren’t facts, it’s time to discuss another instance where your first impression will lead you astray. It’s also another instance that can be characterized as “what you see is not what you get.”

We can begin with a fable of sorts that you may have heard before. It’s the fable of the six blind men and the elephant. These six blind men happened to surround an elephant one day. How they ended up there is unimportant, but if you require a backstory, pretend that they are on a surprise field trip with their scrabble team. Now, elephants are quite large, which means each blind man was situated at a different part of the elephant. One by one, they reached out to the part of the elephant that was nearest to them: the knee, the side, the tusk, the trunk, the ear, and the tail.

The thing is, none of these blind men was wrong, but their perspectives were limited by what they could feel in their positions, to the point that they ended up being incredibly wrong about the elephant’s overall appearance.

Perspective is not reality, it’s just your perspective, and you must gain a three-dimensional view of a situation or decision to think clearly about it. Whether you want to admit it or not, we are all some version of the six blind men, only feeling what’s in front of us and not being able to conceive of what we might be missing.

For a more direct illustration, just imagine that for two people standing across from each other, the number 6 drawn in chalk at their feet is also a 9 (or is it the other way around?).

There’s no right or wrong way to perceive a given situation or object. Our ideas, images and opinions of life are all subject to molding through our experiences. Nobody has a foolproof, 100% objective way to perceive reality accurately. However, there is a complete way to view things, and it necessarily involves as many perspectives as possible.

Take a man and a woman walking out of a motel in the middle of the afternoon in slightly disheveled clothes.

Some of us would have zero impression because we are too distracted and busy. A moral crusader might assume that they were having an afternoon fling intended to be kept secret from their significant others. Someone who works in an adult industry might be so desensitized to such a sighting that it barely registers to them at all. Meanwhile, someone who works as a travel agent may not even consider what the couple were doing in their room; they’ll wonder how much they paid for the room and what rating they would give it. And the motel housekeeper probably just cares about how much of a mess they’re going to clean up.

The point is, we can take a moment as minuscule and unimportant as this one and run with it, making assumptions, predictions, or judgments that may be completely inaccurate, simply because of what we know (or, more accurately, what we think we know). We do this based on our character, values or experiences. And it’s a natural and nearly unpreventable thing to do. But it’s not reality.

Any number of things shape our interpretations of events and situations in the world. Our religious, political or philosophical leanings can shape how we see the world. So can our childhood upbringings. So can drugs or alcohol usage. So can the media. So can our social or institutional environment. So can our fondness for cats or dogs. So can whether we prefer books, movies or television. It can be any influence whether we’re aware of it or not.

Individual perspectives can also come from what are known as schemas and heuristics. They are both psychological concepts that organize what we know about the world and facilitate quick decision-making.

Schemas. A schema is a model by which we arrange and decipher the information we receive. It allows us to say, “Okay, based on these three factors I can observe, I know what this is.” Imagine a schema as a snapshot of a certain situation, and using that snapshot to arrange unfamiliar information. A schema will help you understand that you are in a fancy restaurant, based on the tuxedos and golden toilets you see.

Introduced by psychologist Jean Piaget, we have schemas for many situations. Schemas develop throughout our entire lives, though they’re at their most prevalent when we’re learning about something for the first time. But while schemas are extremely useful, they can steer us toward unwarranted biases or errors. Of course, they are uniquely personal to us, depending on our experiences.

Heuristics. While schemas help (and hurt) us in interpreting new situations, heuristics are more about how you fit into a new situation. “If this is the situation, then I should act in this way.” A heuristic will help you know exactly how to act in that fancy restaurant.

We make hundreds of decisions every day. Most are small, ultimately trivial ones: what we’ll have for lunch, what radio station we’ll listen to on the way home, what grocery store we’re going to shop at, and so forth, unlike major life decisions that could have long-term consequences. We simply can’t evaluate every last detail or possible ramification about small decisions. It would be a waste of valuable time and mental energy.

Schemas and heuristics take less effort, energy, and time, making everything simple. It forces simplicity upon complex matters, which isn’t always helpful; they blind us to the nuanced realities that dwell underneath almost everything under the sun.

Everything in this section culminates in the fact that one can have a million and a half perspectives about anything—but you only start with one of them. To find reality, you need at least a few. You’ll need to proactively seek them out, as they won’t come naturally.

This is all to say that you seldom have the whole story. Try to see your perspective as one bit of information to evaluate, and then search for the rest of it.