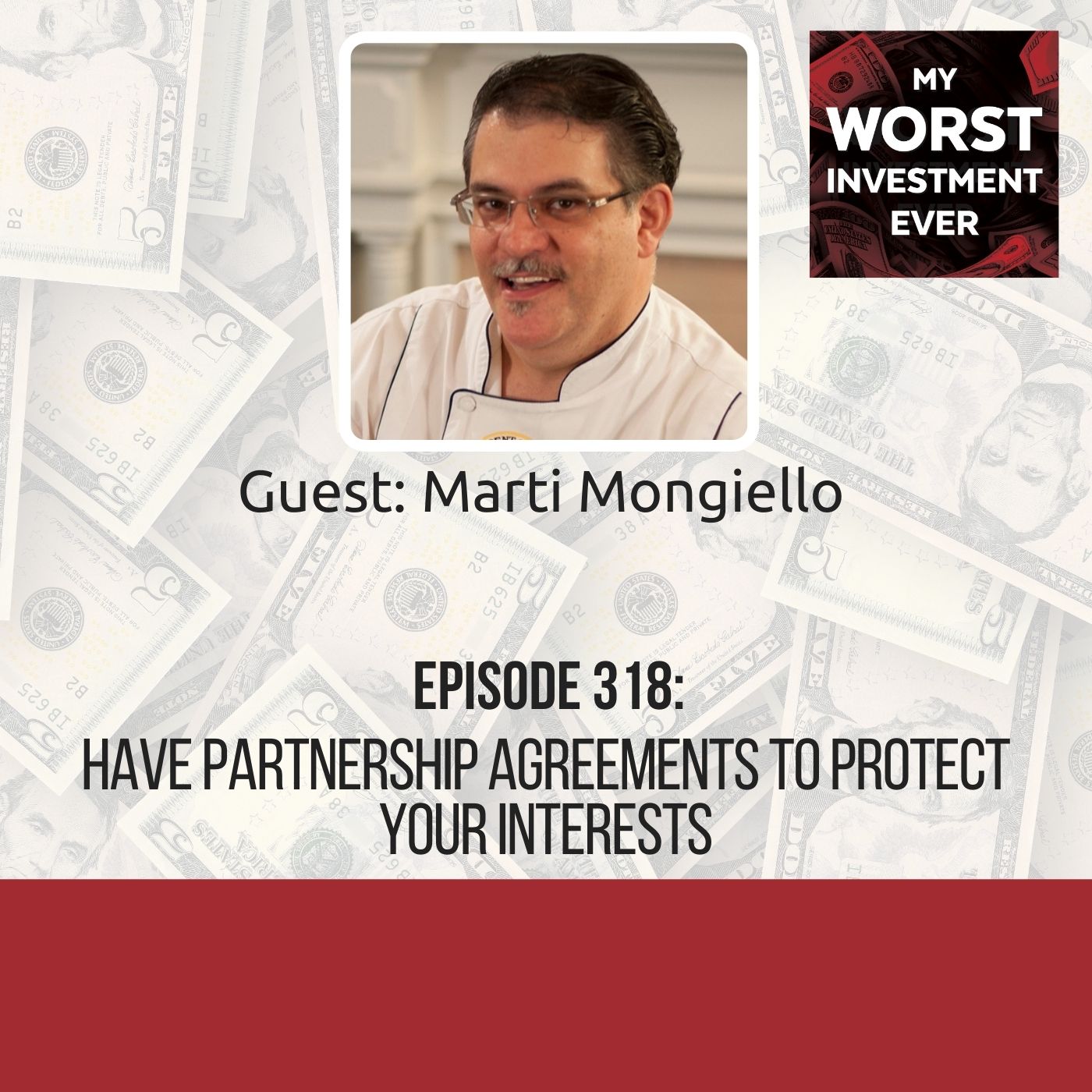 Marti Mongiello – Have Partnership Agreements to Protect Your Interests

Chef Marti Mongiello is a story weaver intoxicating his audiences by stage and television across the world. A mesmerizing speaker, he’s published nine books, 200+ papers, and given over 100 speeches and keynotes in Europe, Asia, and America. Featured on CBS, PBS, ABC, NBC, CNN, and FOX to almost three billion viewers is only eclipsed by articles in 160+ newspapers and magazines like the Washington Post, LA Times, Australian, The New Yorker, FOOD TV Network Magazine, The Times of London, and many more. His latest television series is Inside the Presidents’ Cabinet.

Marti is a former White House Chef, Private Investigator, Security Expert, Executive Chef, and a GM of the Camp David Resort and Conference Center working with the past five Presidents for 25 years, from H.W. Bush through Trump.

“Get a super-strong prenuptial agreement that covers everything. You will sleep well at night knowing that every eventuality is covered.”

Marti lived in Japan when he was contacted for a business partnership by a food service-oriented company that wanted to bring foodservice training online. They thought it would be great for their business to have a former White House chef as their brand’s face.

Marti thought this would be a good idea given that he is a great presenter, business plan writer, and an excellent writer and storyteller.

Knocking the plan out of the park

Marti flew to Arizona, where the company founders floated numerous stock certificates and bylaws to him. Marti was still in the military at the time and a bit naive as to how these things work. And so he missed critical statements in the founder’s document and in the bylaws, which were registered with the Secretary of State.

Nonetheless, Marti sat with them for several days and honed the entire pitch. He went through several training sessions to perfect the pitch. They then flew to New York and presented their professional pitch to a hedge fund interested in their idea. They did a splendid job and got funded.

Soon after the funding came, Marti, got a phone call saying that the founders wanted to dilute everyone’s shares. Marti’s shares in the company would reduce from 33% to 4%. He was not thrilled about that, especially because it was not discussed with him before it was made.

Per the bylaws, the founders formed a quorum, had a special meeting, and went ahead and slashed everyone’s shares. Then they sent him a check for 40 bucks for the shares that they took from him.

Losing everything due to ignorance

Marti was not familiar with liquidation clauses or the various other clauses in the bylaws, such as unanimous voting. And because of his lack of knowledge, Marti lost everything he had worked hard for in this partnership.

Always have partnership agreements prepared before getting into a partnership. Squatters and liquidation clauses must be addressed in a partnership agreement, and so must the bylaws. Whether you are investing in the project or being part of a group that is launching a new product or service, these are just necessary provisions that have to be dealt with initially.

Before getting into a partnership, discuss the liquidation clause. How is the company allowed to be liquidated? If you disagree about this as partners, it could get messy down the road.

If you have old shareholders who are no longer contributing to your company’s progress, it is good to remove them from the process. They can still own shares, but they should not be allowed to participate in the decision-making process.

Be careful when dealing with funders. Be sure to have it in writing, the extent to which they should participate in your company. Just because they give you funds should not give them an automatic right to run your company.

Have a prenup with your business partners

Put time into drawing a prenuptial agreement that stipulates what is going to happen when the partnership is dissolved. You will sleep well at night knowing that every eventuality is covered.

Be clear about your valuation process

When drafting the shareholders’ agreement, have a provision of the actual way you are going to value your company. The benefit of this is that you will ensure that you do not have a situation where one guy walks out and sells his shares to your competitor.

Have a provision for dilution in your business partnership agreement

It is impossible to avoid dilution, so you want to have the provisions to go through it in your business partnership agreement.

Get a super-strong prenuptial agreement covering everything, from angry outbursts to storming out of the building to threats via email and phone to full-on intimidation tactics. The contract should spell out all that behavior, what happens, who does what, and when this occurs.

Marti’s number one goal for the next 12 months is to hold The World Leaders Summit in London from December 7th to 16th, 2021.