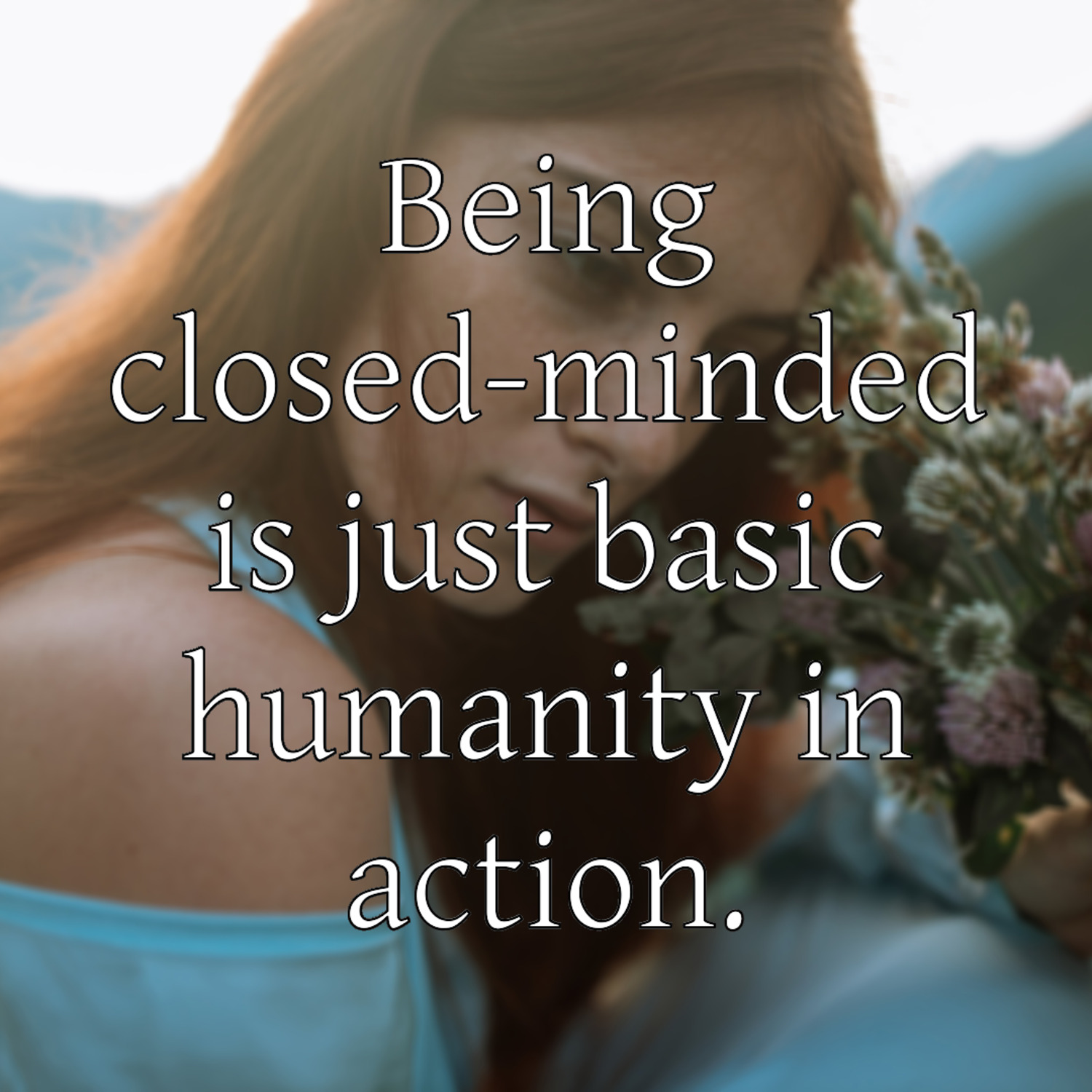 An integral part of crystal-clear thinking is to be open-minded. Being open-minded means hearing evidence or an argument and not making an instant judgment. It means being able to say, “I don’t know” and resist that feeling of uncertainty. These are all difficult because we are wired to do the opposite.

So, it would seem that our brain’s greatest virtue and its biggest limitation are the same: its tendency to create shortcuts, save time, make helpful assumptions and fill in the blanks. We’ve considered certain quirks and idiosyncrasies of our brains and how we can improve our thinking by being aware of the distortions inherent in our perception, emotions, unique perspectives, and memories. Now let’s turn to another major roadblock to independent thought: we can call it a lack of “open-mindedness”, or be blunt and call it sheer pig-headedness!

You’d like to think that people place a high value on being open-minded and, as Aristotle said, entertaining multiple thoughts without fixating on one—but sadly, that’s far from the reality. It’s far from how we are wired as humans. You only have to scroll through the comments of any social media platform or news website to know that people aren’t so interested in hearing what other people have to say. If there is a stance, there is an antithesis to that stance. Furthermore, agreeing to disagree is not an option, either. Even when there are no stakes, most people seem to feel tangible, physical pain at the prospect of changing their mind and absorbing conflicting information.

Why are people so closed-minded?

What causes this quirk of humans to hold onto what it knows as the truth, and habitually disregard others? We might like to think that it’s only other people who demonstrate this enraging habit, but if we’re honest, we are as likely to do it ourselves. Have you ever gotten mad at someone for some perceived slight, geared yourself up to be all indignant and angry about it, only to quickly realize that you were mistaken and that your anger is misplaced? Perhaps you were just about to yell at your roommate for leaving their bike in the hallway only to suddenly realize it’s your bike in the hallway. You may find that it’s quite hard to let go of the initial angry feeling despite intellectually knowing you've made the error. You may still harbor the stubborn opinion that your roommate is inconsiderate and untidy – the evidence right in front of you seems not to have properly registered. Why? Why do we stick to an opinion—any opinion?

Like many behaviors that emphasize immediacy over accuracy, we can generally use the brain's survival instincts as a scapegoat. It may sound cliché to say at this point, but it’s the truth that the human brain is still stuck in the African savannah about 10,000 years ago, and hasn’t quite turned down its alarm systems for modern living. Certainty won, while hesitation was hunted down and eaten for dinner.

Being closed-minded is just basic humanity in action. It’s not a mistake or glitch; it’s an intentional feature of our psyche.

But beyond that, there are plenty of other factors that keep us from listening to others. Of course, we have the aspects we mentioned in the previous chapters of ego, false beliefs, willful ignorance, and resistance to objectivity. Sometimes, we’re just in denial and only see what we want to see (more on this later). Sometimes, we don’t know enough to know that we are wrong (more on this later too). A general lack of outside perspective or experience can also contribute—how open would someone raised to believe that electricity is magic be to any belief system that is not rooted in magic? Someone else might confuse an anecdote as evidence and remain steadfast in their belief based on that.

Additionally, people seek comfort and security. They prefer confirmation rather than disruption. Being open-minded is uncomfortable and scary. At the very least, a natural inclination is to seek a path of least resistance, which allows them to save the most energy.

Then there are those whose closed-mindedness is just a part of establishing domination over others. They’re talking to fight, and thus they never listen to gain a deeper comprehension of something—they only do so to figure out how they’re going to argue back. They’re rarely interested in asking anybody questions, and when they are, they’re usually the loaded kind. They state their opinions as absolute truth, almost as bait to be challenged.

Finally, there are those that fear the slippery slope. This is when someone sees credible information that counteracts their beliefs and refuses to pursue it further because they’re afraid of what they’ll discover.

Consider the following dialogue, stripped clean of offending content and focusing on a slippery slope argument against open-mindedness. Bob is tied his belief to the occurrence of a certain event in a certain year, while archaeologists and scientists have suggested that the event they’re talking about happened two years earlier.

Bob’s response to this research was somewhat confusing: “Even if those scientists are correct, if I changed my belief about that date, then I would have to change everything I believe in. Because it would mean I was wrong about other events and other dates, and the result of all my calculations would be wrong, and my entire belief structure would be disproven. So, I’m just not going to go down that road.”

Most of these instances of closed-mindedness can be overcome through patience, evidence, and gentle coaxing. Through a series of experiments involving circuits, light bulbs, and batteries, you might be able to convince the magic believer that electricity is not, in fact, a bunch of tiny fairies being forced into slavery. People are instinctually closed-minded but not impossible to reason with.

But sometimes, a particular over-attachment to beliefs and opinions is tough to overcome. This is a danger zone, and it develops because some beliefs are so important to us that they become part of our identity. Identity is even more important than ego; you’ll recover your sense of pride being momentarily crushed, but a blow to your identity will make you question your self-worth.

The most obvious example is with religious beliefs—it would be accurate to say that people attach their identities to these various beliefs. It even becomes a way to describe ourselves—I’m a Christian/Muslim, and so on. But it even pops up in so-called rivalries between fanbases of different television shows or technology companies—I’m an Apple fanboy, or I’m on Team Jacob! Being told that Team Edward is the correct way to be is a blow to you as a human—your opinions, worldview, and life.

It’s entirely fair to describe oneself that way. But there can come the point where one’s self-identity can get so wrapped up in those descriptors that they dictate our emotions and crowd out rational thinking. It’s a pretty good indicator that if you start describing yourself with a belief, you’re not going to be so open about it. That can breed a belief in absolute truth, always accompanied by closed-mindedness.

Our becoming emotionally wedded to our opinions mutates them into indisputable facts. That’s when they become dangerous. When our beliefs possess our feelings, and we cement them as truth, we start to exclude, judge or dismiss the beliefs of others. Undue feelings of superiority take hold. And in that condition, it’s impossible for actual truths—even provable, scientific ones—to get in.

Whatever the level of intensity, everybody is closed-minded about something. However small, this rigidity leads to a world closed off to reality. If you prefer Apple technology to Android technology, you create a bubble in which no dissent is allowed. It doesn’t take that many bubbles for you to become completely trapped in ego, comfort, security, certainty, emotional attachment, or dogma. It’s a risky way of living.

This chapter will address ways to actively keep an open mind ripe for clarity of thought. We’ll address some of the mental traps and tendencies that keep us from doing so, and we’ll look for ways to blast through those inhibitors and get to the heart of reality.