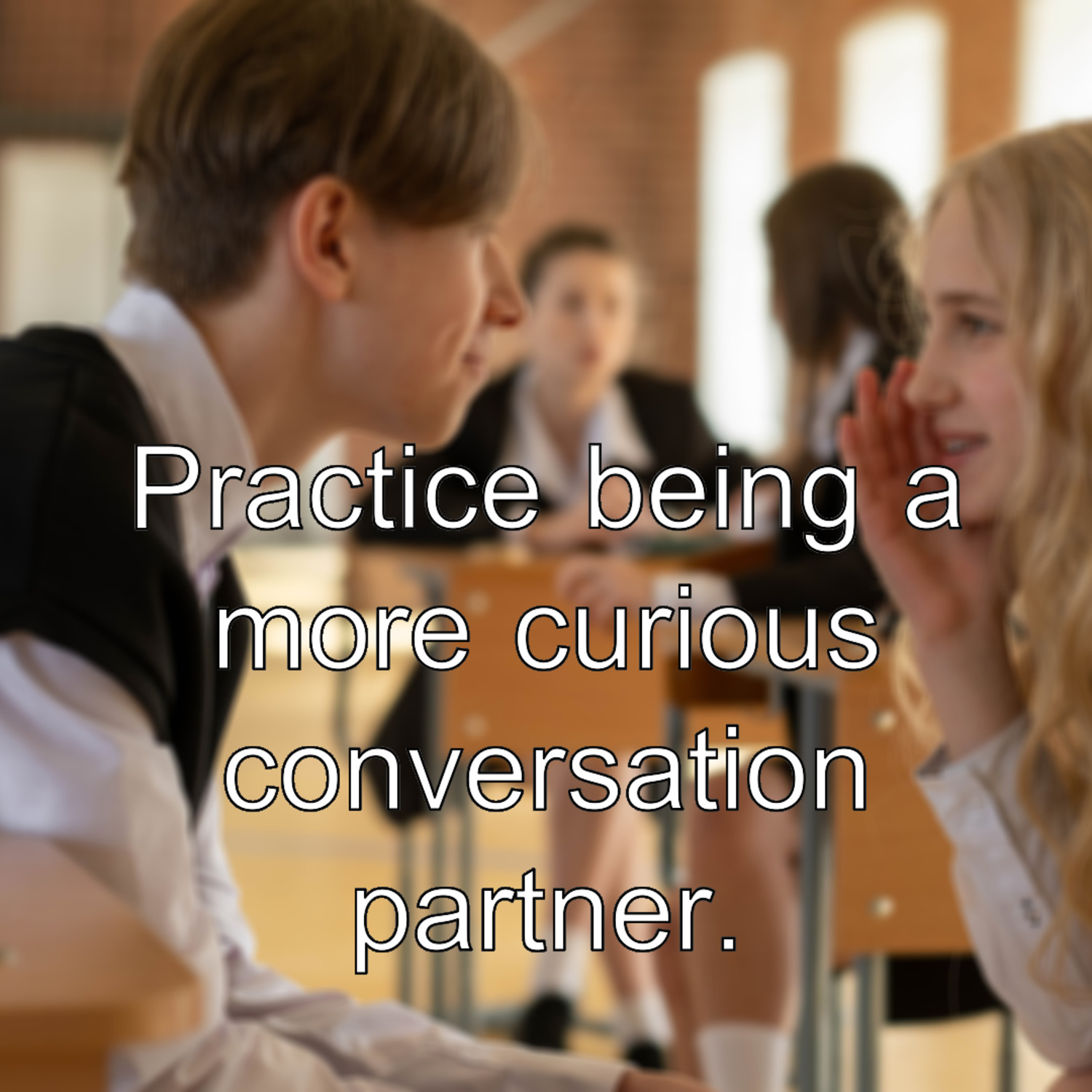 With curiosity, we stay open-minded and humble, and approach others in a spirit of opportunity, respect, and the desire to learn. Express genuine interest in someone by asking open-ended questions and really listening to the answers. Don’t assume, let people speak, and check your comprehension by paraphrasing.

Okay, so we already know that successful communication means dropping the idea that other people are adversaries, enemies, or competitors. When we have empathy for them, we become curious about who they are and what their life is like. Curiosity is an unselfish orientation by nature—we turn our attention away from ourselves for a moment and place it on someone or something else. It’s also a position that doesn’t require ego or stubborn assumptions. Because if we’re approaching someone in curiosity, we are saying I don’t know . . . but I’m interested in finding out.

That means that we’re less likely to lead with our own assumptions, agendas, or theories about what people “should” be doing. We’re less likely to barge ahead with our own perspective or trample over the other person’s. Curiosity is a hopeful, creative mindset—it means we open our minds and prick our ears to new possibilities that we haven’t thought of yet, or imagine that things could turn out in novel, unexpected ways. In other words, being curious is the state of mind where we confidently expect to learn something!

Be honest—when was the last time you experienced and expressed genuine interest in the way that someone else thought or felt?

Probably, you’re more familiar with trying to make your own point of view heard or waiting for the other person to speak so you can respond. But communication is the exchange of information. We’re not merely swapping data that we already know, we are trying to reach out into another person’s world and learn something we don’t know: Who are they? What are they about? What’s going on with them?

If we already knew this (or thought we did), then there would be no point in communication.

You can practice being a more curious conversation partner immediately. The next time you’re in a discussion with anyone about anything, imagine emptying your head completely. See the situation at hand as completely new and fresh to you. Picture yourself as a scientist (or an alien! Perhaps an alien scientist?) trying to get to the heart of things. The best way to do this, of course, is to ask questions. Lots of questions:

“So what do you make of this situation?”

“What are you trying to achieve here? Why?”

“What made you make that decision?”

“What happened before this?”

“What do you think/feel about this particular fact?”

“What do you see as the main problem here?”

You can go a long way by saying things like, “I’m curious about . . .” or, “Help me understand.” You’ll simultaneously flatter people while making them feel heard and as though their opinion is valued. Remember the difference between observation and evaluation? It’s crucial when you’re asking questions to keep value judgments out of the picture entirely. (In other words, don’t ask things like, “Why on earth did you think that was a good idea?”)

Often, we get so carried away in our own perspective that, to be truthful, we simply don’t care about what someone else thinks or feels. We’re not interested in their take on things, and if we’re honest we don’t especially value their ideas. But don’t worry—being curious doesn’t mean you condone actions you don’t like, or that you rate a disagreeable opinion above your own. All you’re doing is perceiving and becoming aware. That’s the magic of curiosity—you’re just asking questions. That’s all.

Imagine you’re working with someone you really don’t get on with. Truth be told, you don’t give half a damn about what they think, what they want, or why they do the (annoying) things they do. You just plain dislike them. And that’s fine! But can you still be curious?

Staying curious keeps you open-minded and primes you to keep on the lookout for new solutions. It gives you insight into others, which at the very least gives you an edge in dealing with them. For example, you learn a little more about your colleague and realize that even though they’re a pain in the rear to people in the office, they’re actually an animal lover and have several pets they adore.

Great! You now have something to talk about with them that is low-stakes and likely to defuse or at least stall any conflict. You know what they value and can find more harmony and cooperation by simply appealing to this side of them. This could be nothing more complicated than strategically sharing details about your pet dog or asking their opinion on a dog-related topic. You do this not because you agree with them or like them, but because you want to get them alongside you and reduce potential friction in the workplace.

Curiosity helps you find that “third story” or that neutral, objective fact that grounds the interaction and stops it from veering off into difficult territory. It tells the other person that you’re not coming to the interaction with an agenda or a preconceived notion about them. It communicates that you’re aware of them as complex, nuanced people with views that are potentially different from yours (it’s that self-differentiation again!), and it also sends a strong message that you’re comfortable and content enough in yourself to occasionally let the conversation dwell on someone else for a change.

One brilliant, practical way to use curiosity to diffuse tension or misunderstanding is to “play dumb.” Don’t make any assumptions but get people to spell things out to you loud and clear. Your assumptions are where the biases and expectations live. To combat these biases, ask what seems to you to be an obvious question or one you think you already know the answer to—you may be very, very surprised.

Ask them the same question in different ways to get different perspectives on the issue. Ask open-ended questions rather than yes/no questions. Don’t put words into people’s mouths—let them describe things in their own terms. Paraphrase, often. For example, “You say that you felt this presentation was inappropriate. I was wondering what you meant by inappropriate, and you explained that you felt it may make some team members uncomfortable. Have I got that right?” Not only does this signal your respectful interest and curiosity, it also shows people that you genuinely care about getting the details right, and that you’re not just pretending to be concerned.

And here we arrive at the most important part: true listening. When you ask a question, your role is not to interpret what you’re told. It’s not to figure out your rebuttal. It’s not to decide if you agree or zone out while you think about something else.

It’s to listen. That’s all!