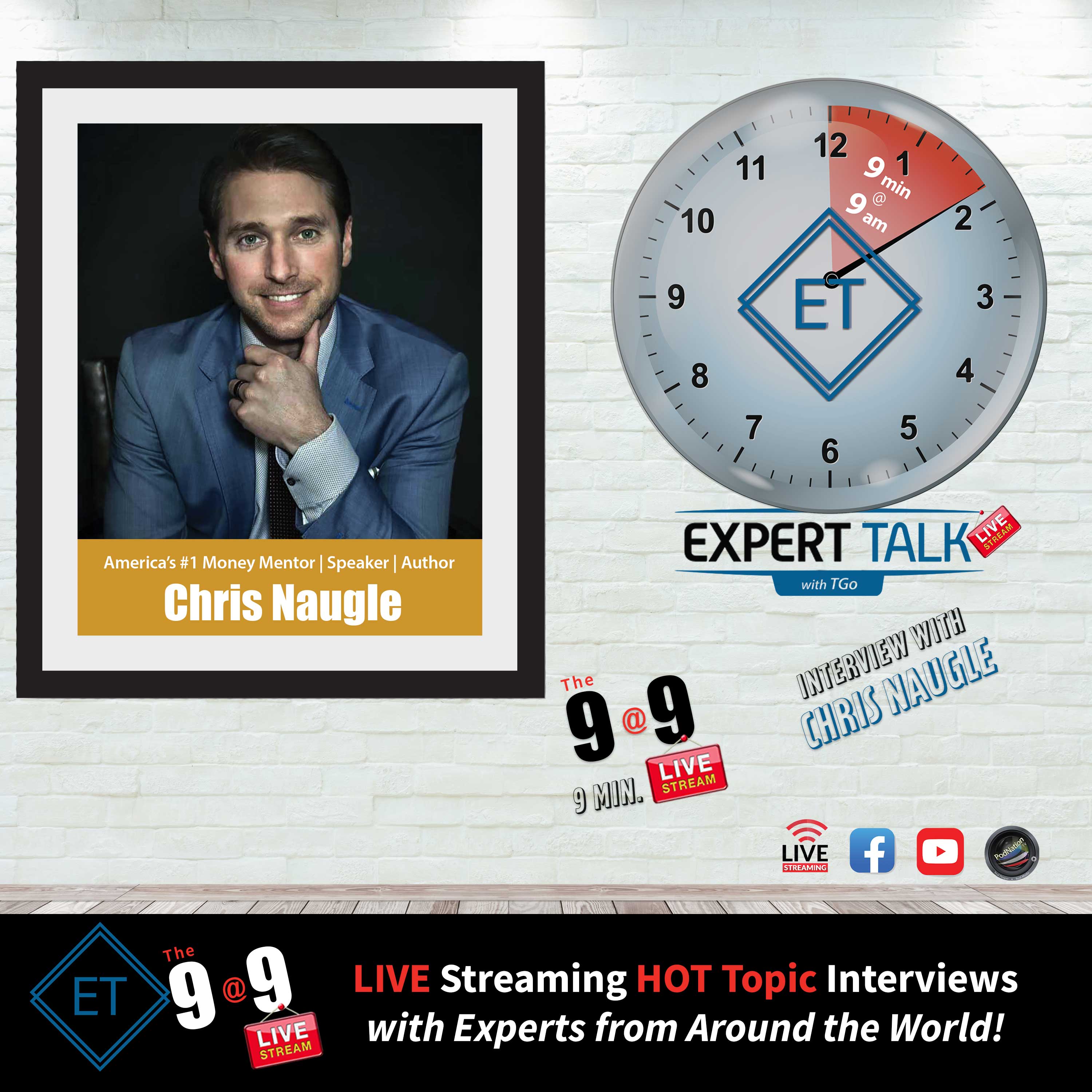 like in the whole world. You've been wanting to know how you make money, how you grow, how you, yeah, he's here, Chris Naugle here. You out there. I'm here. Hey, thanks for having me on the show. Thanks for being on the show. The #1 Money Mentor. Really. I didn't come up with it.

Somebody started calling me that and then it just never stopped. And I'm like, Ooh, that's a, that's a big shoe to fit into. So if you're a money mentor, there's so many different ways to look at money. What kind of mentor are you teaching people? How to invest? Are you teaching people how to grow their business? What do you,

what exactly are you doing? Yeah, specifically. Well, so we teach people the secrets of the wealthy, and it goes back hundreds of years ago from the Rockefellers, the Rothschilds, the JP's the Morgans, heck you can go back to the times of Babylon and you know, straight out of the book, The Richest Man in Babylon, the secrets that the wealthy use to build wealth is what we teach.

And you know, I, I come from the wall street world. So I have lots of investments, you know, experience over 16 years being there, but I'm no longer in that world. And I realized that the traditional financial knowledge that we've been taught our whole life, much of it is a lot, much of it is there to get you to give up control of your money.

we literally will be on the path that all the wealthy use to build and not just build, but keep their wealth because you know, everybody right now is great at making money and building wealth, but they're not good at keeping it. They give it all back. And that's why they always say when someone has money, it always seems to go back to the same sources because we have not yet learned the secrets of wealth.

everybody out there, if you've never heard of it, go find it. It's an amazing book. Just kind of get your brain going what? go get that book. Now, how important is it to be resourceful and creative and all that? So what does being resourceful mean to you? Well, Let's talk, there are two totally separate things. So I think resourcefulness is really just our ability to stop focusing on what we have in the source of resources.

So you're going to have to figure this out. So being resourceful is very much key, but too many people just sit back and they just expect things to come to them. When the people that create some will, will turn over to creation the creators, go out there and figure it out and actually get resourceful. And that's one of the biggest things that really helps them get ahead and kind of get a jumpstart over everybody else.

Creativity. Single-handedly I think one of the most important things, and I'm going to go back to, you know, the secret, the strangest secret in the world, Earl Nightingale, we all, that's another must watch or read or listen. So in that he talks about what is the difference between successful people and unsuccessful people. There's only one difference in all of his studies and the successful we'll call them the 5% because that's what it is.

The 5% out there create. They create their financial destiny. They create something that changes other people's lives. They solve problems for people when the other 95%, according to social security, out of a hundred people, only five are going to be financially successful. That's the 5%. So what happened to those other 95% simple, they can form. They can form somebody else's ideology.

Somebody else has failed dreams. They didn't believe in their dreams. So they resorts to this. Somebody else telling them what their life should look like. And that always leads. Well, we all know where that leads. The 95%. Yeah. Nowhere. That's what that leads is nowhere. You know, it reminds me every time I'm driving around town,

we have double turning lanes. You know, there'll be 15 cars in one turning lane and one in the car lane next to it. It's like, you do know we're going to the same place, but they just follow. It's like, why don't you just follow the leader? Nevermind. Don't get me started. We'll talk about this all day. Anyway,

you said you come from nothing, but that is not necessarily true because you were a pro snowboarder A Prosnowboarder. How did you do that? What, how do you go from snowboarding to finance and money? Ok talk to me. So I'm going to do this really quick. So when I say I come from nothing, that, that is a false statement.

Okay. I come from a lower, lower middle-class family raised by my Mom. My dad was an alcoholic and we didn't have any money. So we barely were able to keep a 700 square foot, two bedroom house over our heads. That's that's the struggle my Mother had. So nothing is a, is a false statement, but how did I get to where I was?

dimes quarters, and she put them in a giant glass jar. And I watched this as a kid. She wanted a lawn mower. She'd save all the money up in this glass jar. When there was enough, we'd roll it all up and we'd buy the lawnmower. And this is just what I got accustomed to. So then my Mother bought me a little black box that had a slider top and I'd go out mow lawns,

cleaned the neighbor's horse stalls or pig pens, and I'd make money and I'd put it in there. And, and that's how I bought dirt bikes and go-karts and the things that I wanted as a child. Right. So now let's kind of take that fast forward. So how did I become a pro snowboarder? I came from Buffalo, New York. So we had no lack of snow.

We don't have mountains here. We don't, we're not the epicenter for snowboarding, but I watched one guy, okay. His name was Blair Russ. And I watched him become pro. And he was a guy that lived in my town and I just simply said, what was his path? How did he do it? And I followed what he did the success path,

if you will. And I did what everybody else was unwilling to do. Now I didn't have resources. So I had to be resourceful. I couldn't afford to go to the resorts. I couldn't afford new boards. So duct tape was an important thing. Used equipment was important, but I had this, this ravine by my house. It was a country club.

And in, in the country club, they have a sand traps you've all seen them. I would go there and I would find the sand trap that was on the down slope of the hill. And I'd build a jump out of it. And that's how I learned all my tricks. So then how did I end up from snowboarder to wall street? Well,

I had skateboard snowboard shops, another big dream that I started at 17 years old. And then all of a sudden I hit a recession and that recession brought me to my knees. It was the.com crash. First one I'd ever seen. I needed to get a job. So little Caesar's pizza, true story. I went there to get a job as a pizza delivery guy.

I figured I work at my store in the day, deliver pizzas at night, they weren't hiring. I put my resume out. And the only people that called me were wall street firms. So that's how I entered the wall street world. And I rose to the top because I was willing to do what everybody else was unwilling to do. And that is my secrets to success in terms of entrepreneurship.

And I've also taken that same approach. When it comes to building wealth, you have to be willing to do what everybody else is unwilling to do, which means changing your mindset. Start thinking like the wealthy, doing what the wealthy do and following simple steps. One simple change, which you guys can get in my book or my website. There's one change that they do.

And they change where their money goes first. And because of that, it puts them in control and it earns uninterrupted compound interest. So now they've got money working for them. We all work for money. We got to start making our money work for us. But Wow That's amazing, that's amazing. You know, I've got to ask you before we get out of here,

because Allen's going to cut us off. I've got to ask you what web address did they go to? Because some people may be listening instead of watching, where do they go find you? Yeah, ChrisNaugle.com. And the biggest advice I can give you. And there's no sales here. Okay? This is just education. Watch the 90 minute video on my website,

which is ChrisNaugle.com. That 90 minute video changed my life. And it will change yours, but you got to give me 90 minutes and that's, that's the gateway to success. Then we touched on this, watch, this nine minutes went flying by. I know you have a mastermind program. They can go find out about that.

And as always, I'm TGo and I'll talk to you next time. Really? Allen for real we were this close just his close?