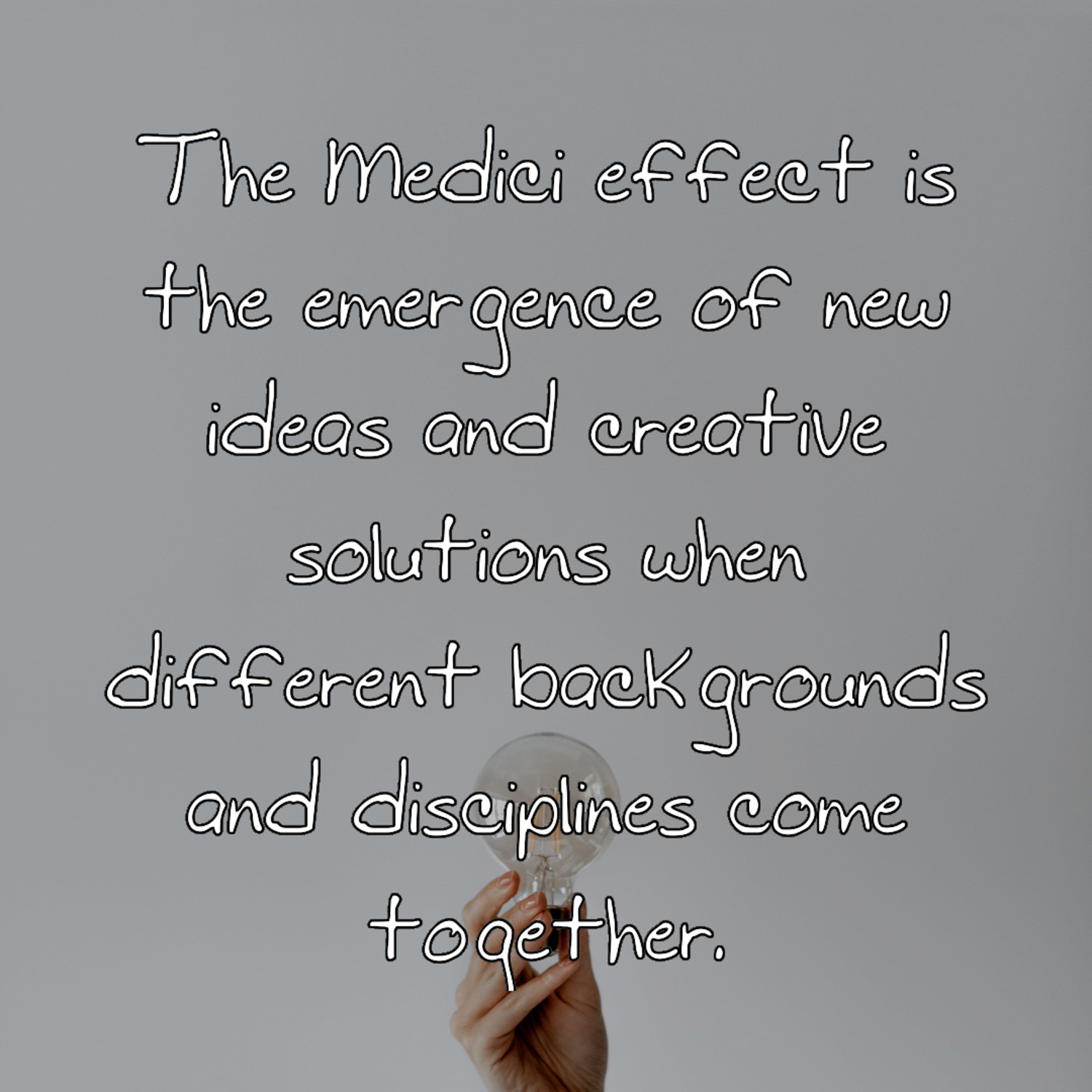 To get more creative, think more plainly. It sounds counterintuitive, but simple thoughts underlie complex processes and solutions. Thinking more basically allows you to refocus on what matters and escape what is known as functional fixedness. When we start to view goals and concepts in isolation and free of contextual constraints, we are freed.

It sounds sinister, but the truth is, most creative and innovative thought comes from something else. And if it doesn’t, that’s the first place you should look for inspiration. Though it’s likely you’ve seen this phenomenon in many instances, it has been officially called the Medici effect by author Frans Johansson. He describes the Medici effect as the emergence of new ideas and creative solutions when different backgrounds and disciplines come together.

The term is derived from the 15th-century Medici family, who helped usher in the Renaissance by bringing together artists, writers, philosophers, mathematicians, and other creatives from all over the world. Arguably, the Renaissance was a result of the exchange of ideas between these different groups all in close proximity with each other in 15th-century Florence and Rome.i effect is the key to best meeting client needs and maximizing profits

while minimizing costs. Believing that all new ideas come from merging existing ideas in creative ways, he recommends utilizing a mix of backgrounds, experiences, and expertise in staffing to bring about the best possible solutions, perspectives, and innovations in business. Take what works well in each discipline and marry them.

And the same holds true for creativity in general as well—pulling in knowledge from different disciplines and relating elements from various fields are powerful tools for generating creative ideas. A common object in one field may be an extraordinary tool in another. A perspective or approach might be commonplace in one discipline but revolutionary in another. A conventional concept in one domain may have new and interesting applications in a different one.

For example, creative implementations of traffic rules have pulled ideas from not only electronics, engineering, and information technology but also from visual arts, psychology, and advertising. It’s a familiar concept in psychology that people, when making decisions, rely on not only rational information but also emotional cues. Utilized in implementing traffic laws, this concept has led to the innovation of using smiley faces in traffic lights to get more people to respond to them.

The advantages offered by pulling together knowledge and resources from multiple disciplines to aid problem-solving are evident in the findings of researcher and professor Brian Uzzi. Analyzing over 26 million scientific papers published over the last several centuries, Professor Uzzi found that the most impactful have been those done by teams with members from an atypical combination of backgrounds. Another of his investigations revealed that top-performing studies cited an atypical combination of other studies, often pulling in at least 10 percent of their citations from fields other than their own.

Thus, to be creative, you’ll need to evoke the Medici effect by broadening your perspective to encompass different disciplines and not being afraid to wander outside your current area of focus. Poke your nose into other fields and pull from them ideas that might work in combination with what you already have. By bringing in knowledge from other disciplines, you introduce a fresh take on your creative venture and give yourself the best chance of coming up with remarkable innovations and solutions.

It is perhaps no coincidence that we still speak of Leonardo da Vinci and his polymathic tendencies—perhaps our continued regard is due to those very tendencies. At the very least, he was an accomplished painter, sculptor, engineer, architect, and anatomist. He also possessed keen interests in ornithology, machinery, and ciphers. He is the prime example of how different disciplines can come together, synergize, and spit out creative work that is revolutionary and innovative. It is also no coincidence that the Medici family was one of da Vinci’s prime patrons during his lifetime.

Albert Einstein also utilized this concept in his method of combinatory play.

Though Einstein is not traditionally known for his creativity, there can be no doubt that a scientist with outrageous and innovative theories possesses a massive degree of creativity. It’s not just following a set of equations that can lead to scientific breakthroughs—a mindset full of openness and a determination to find the unknown is required, and Einstein certainly had those in spades. tein’s intellectual accomplishments—

for instance, the theory of relativity and a newfound understanding of the laws of physics. But you may not know how he was able to come to these discoveries.

The most notable scientist of the 20th century was known for taking time out of his research to play the violin. Reportedly, he was even very good at it, as he was with the piano. But while sawing away on the violin during his breaks, Einstein actually arrived at some breakthroughs in his research and philosophical questionings. Allegedly one of these musical sessions was the spark for his most famous equation: E=mc2.

In the following, I am trying to answer in brief your questions as well as I am able. I am not satisfied myself with those answers, and I am willing to answer more questions if you believe this could be of any advantage for the very interesting and difficult work you have undertaken.

(A) The words or the language, as they are written or spoken, do not seem to play any role in my mechanism of thought. The psychical entities which seem to serve as elements in thought are certain signs and more or less clear images which can be “voluntarily” reproduced and combined.

There is, of course, a certain connection between those elements and relevant logical concepts. It is also clear that the desire to arrive finally at logically connected concepts is the emotional basis of this rather vague play with the above-mentioned elements. But taken from a psychological viewpoint, this combinatory play seems to be the essential feature in productive thought—before there is any connection with logical construction in words or other kinds of signs which can be communicated to others.

(B) The above-mentioned elements are, in my case, of visual and some of muscular type. Conventional words or other signs have to be sought for laboriously only in a secondary stage, when the mentioned associative play is sufficiently established and can be reproduced at will.

(C) According to what has been said, the play with the mentioned elements is aimed to be analogous to certain logical connections one is searching for.

(D) Visual and motor. In a stage when words intervene at all, they are, in my case, purely auditive, but they interfere only in a secondary stage, as already mentioned.

(E) It seems to me that what you call full consciousness is a limit case which can never be fully accomplished. This seems to be connected with the fact called the narrowness of consciousness (Enge des Bewusstseins).”

As this letter inidicates, Einstein seemed to believe that indulging in his creative tendencies was helpful for his logical and rational pursuits.

Combinatory play is not simply the notion that play takes your mind to a different world to regroup. It recognizes, as Einstein did, that taking pieces of knowledge and insight from different disciplines and combining them in new contexts is how most creativity truly happens. So as mentioned, Einstein achieved something in playing the violin that helped him think about physics in an entirely new way.

The lesson here is to engage in your own pursuits and not feel constrained by having to stay in similar or adjacent disciplines, thinking that they will aid you. There are always parallels between different disciplines, so find them. More of the same probably will not help; a dash of something different just might.