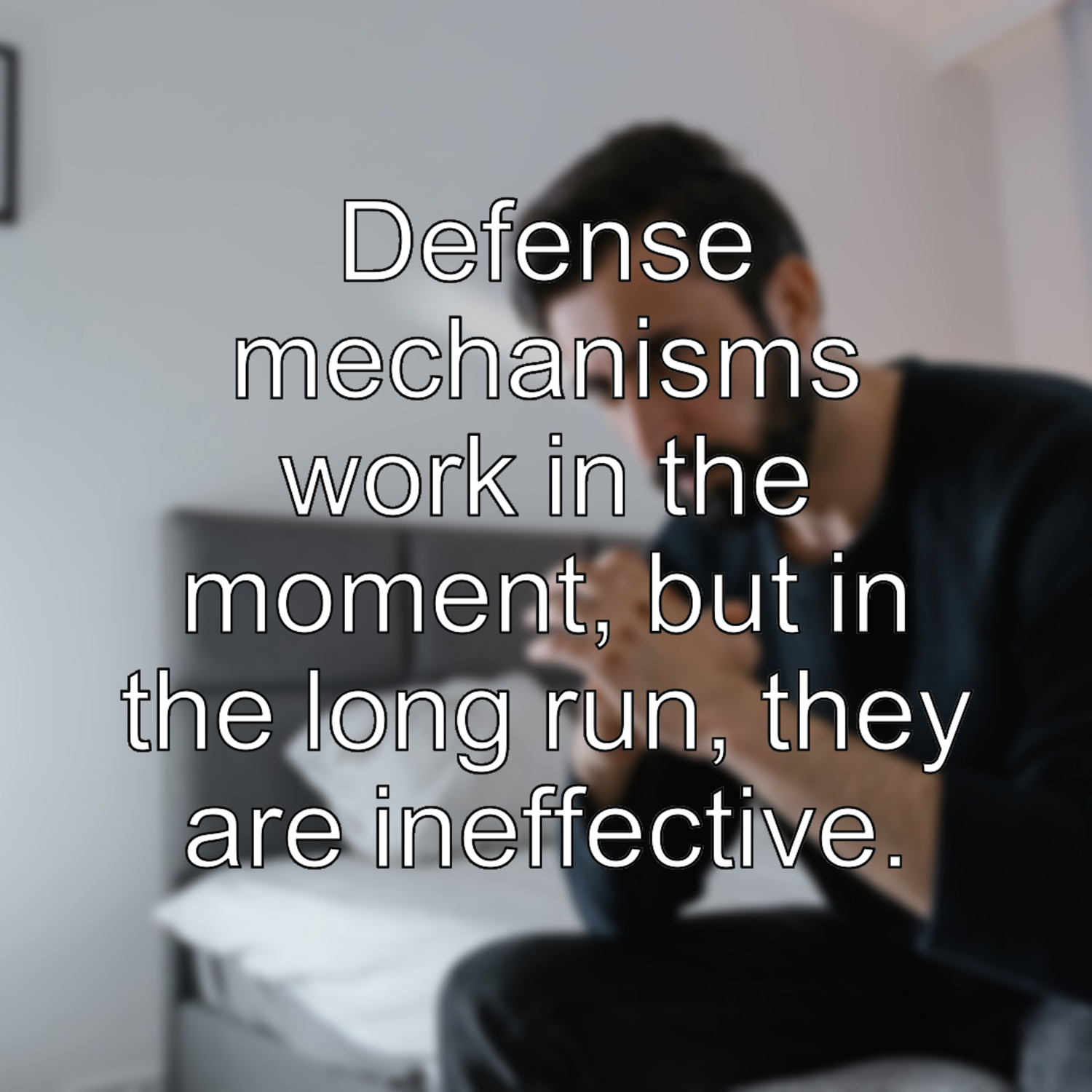 Loss, rejection, uncertainty, discomfort, humiliation, loneliness, failure, panic . . . all of these can be defended against using certain mental tricks. These mechanisms are there to protect us from experiencing negative emotions. They work in the moment, but in the long run, they are ineffective since they rob us of the opportunity to face, accept, and digest inevitably negative emotions as they crop up.

Defense mechanisms are the specific ways we protect our ego, pride, and self-esteem. These methods keep us whole when times are tough. The origin of the term comes from Sigmund Freud.

These so-called defense mechanisms are also a powerful predictor of behavior and will give you a deep insight into why people do what they do. Defense mechanisms can take many varied and colorful forms, but there are a few common patterns that you’ll see in others (and hopefully yourself!). These psychological shields rear up when the ego senses something it doesn’t agree with, can’t face, or wishes wasn’t true.

Loss, rejection, uncertainty, discomfort, humiliation, loneliness, failure, panic . . . all of these can be defended against using certain mental tricks. These mechanisms are there to protect us from experiencing negative emotions. They work in the moment, but in the long run, they are ineffective since they rob us of the opportunity to face, accept, and digest inevitably negative emotions as they crop up.

Naturally, if you can observe somebody using a defense mechanism, you can instantly infer a lot about them and their world, particularly about the things they find themselves unable to deal with. This in turn tells you a lot about how they see themselves, their strengths and weaknesses, and what they value. Let’s look at some defense mechanisms with concrete examples. You just might recognize these two defense mechanisms put forth by his daughter, Anna Freud: denial and rationalization.

Denial is one of the most classic defense mechanisms because it is easy to use. Suppose you discovered that you were performing poorly at your job. “No, I don’t believe that report ranking all the employees. There’s no way I can be last. Not in this world. The computer added up the scores incorrectly.”

What is true is simply claimed to be false, as if that makes everything go away. You are acting as if a negative fact doesn’t exist. Sometimes we don’t realize when we do this, especially in situations that are so dire they actually appear fantastical to us.

All you have to do is say “no” often enough and you might begin to believe yourself, and that’s where the appeal of denial lies. You are actually changing your reality, where other defense mechanisms merely spin it to be more acceptable. This is actually the most dangerous defense mechanism, because even if there is a dire problem, it is ignored and never fixed. If someone continued to persist in the belief they were an excellent driver, despite a string of accidents in the past year, it’s unlikely they would ever seek to practice their driving skills.

Rationalization is when you explain away something negative.

It is the art of making excuses. The bad behavior or fact still remains, but it is turned into something unavoidable because of circumstances out of your control. The bottom line is that anything negative is not your fault and you shouldn’t be held accountable for it. It’s never a besmirching of your abilities. It’s extremely convenient, and you are only limited by your imagination.

Building on the same prior example of poor job performance, this is easily explained away by the following: your boss secretly hating you, your coworkers plotting against you, the computer being biased against your soft skills, unpredictable traffic affecting your commute, and having two jobs at once. These flimsy excuses are what your ego needs to protect itself.

Rationalization is the embodiment of the sour grapes fable. A fox wanted to reach some grapes at the top of a bush, but he couldn’t leap high enough. To make himself feel better about his lack of leaping ability, and to comfort himself about his lack of grapes, he told himself the grapes looked sour, anyway, so he wasn’t missing out on anything. He was still hungry, but he’d rather be hungry than admit his failure.

Rationalization can also help us feel at peace with poor decisions we’ve made, with phrases such as, “It was going to happen at some point, anyway.” Rationalization ensures you never have to face failure, rejection, or negativity. It’s always someone else’s fault!

While comforting, where do reality and truth go amidst all of this? Out the window, mostly. Intellectual honesty requires you to first defeat your natural tendencies to be dishonest. Thoughts dictated by self-protection don’t overlap with clear, objective thoughts.

Closely associated is repression. Whereas in denial the reality is refused or downright rejected, repression is where a person pushes the thought or feeling so far out of consciousness, they “forget” it. It’s as though the threatening emotion never existed in the first place. An example might be a child who experiences abuse. Because it is so painful, and because they had no way of helping themselves, they might push the memory so far away that they never have to deal with it.

Sometimes, the overpowering emotion is unwelcome, but what is really unacceptable to the ego is where it comes from. In such a case, displacement might occur as a protection against unpleasant truths. A woman might work at a job she hates but cannot realistically leave. Simply, she cannot express or even acknowledge that she resents her job because this draws a threatening attention to her financial bind. What she might do, though, is take that resentment and put it elsewhere. She might come home every day and kick the dog or yell at her children, convinced that they are the ones making her angry. It is easier and less risky to confront her feelings of anger when they are directed to her pets or children.

Projection is a defense mechanism that can cause considerable damage and chaos if not understood for what it is. In this case, we place unwanted and unclaimed feelings onto someone or something else rather than seeing that they are a part of ourselves. We do not recognize our own “dark side” and project it onto others, blaming them for our shortcomings or seeing our flaws in their actions.

An example is a man who is cheating on his wife. He finds his own behavior unacceptable, but rather than allow himself to condemn his own actions, he projects that shame onto his (bewildered) partner and is suddenly suspicious of her behavior, accusing her of keeping something from him.

The example of a blatantly homophobic man who is revealed to later be gay is so common by now it’s almost comical. Reaction formation just might be behind it. Whereas denial simply says, “This isn’t happening,” reaction formation goes a step further and claims, “Not only is that not happening, but the exact opposite is the case. Look!”

A woman might be terrified of her new cancer diagnosis and, rather than admit her fear, puts on a show to everyone of being courageous, preaching to others about how death is nothing to fear.

In times of extreme emotional distress, you might find yourself regressing to a simpler time (i.e., childhood). When you were young, life was easier and less demanding—to cope with threatening emotions, many of us return there, acting “childish” as a way to cope. A man might be facing some legal troubles over misfiled taxes. Rather than face the situation, he gets into a screaming match with his accountant, banging his fists on the table in a “tantrum” and then pouting when people try to reason with him.

Finally, we come to sublimation. In the same way that projection and displacement take the negative emotions and place them elsewhere, sublimation takes that emotion and channels it through a different, more acceptable outlet. A single man might find the loneliness at home unbearable and channels that unmet need into doing charity work four nights a week. A woman may receive some bad news, but rather than get upset, she goes home and proceeds to do a massive spring clean of her home. A person might routinely turn panic and anxiety into a dedication to prayer, and so on.

Defense of the ego is a nasty habit, but it’s easy to recognize when you know of its insidious presence. Sometimes we can’t help it; we’re all human. But we can use this to our advantage by using it as a clear quantity to analyze people with.