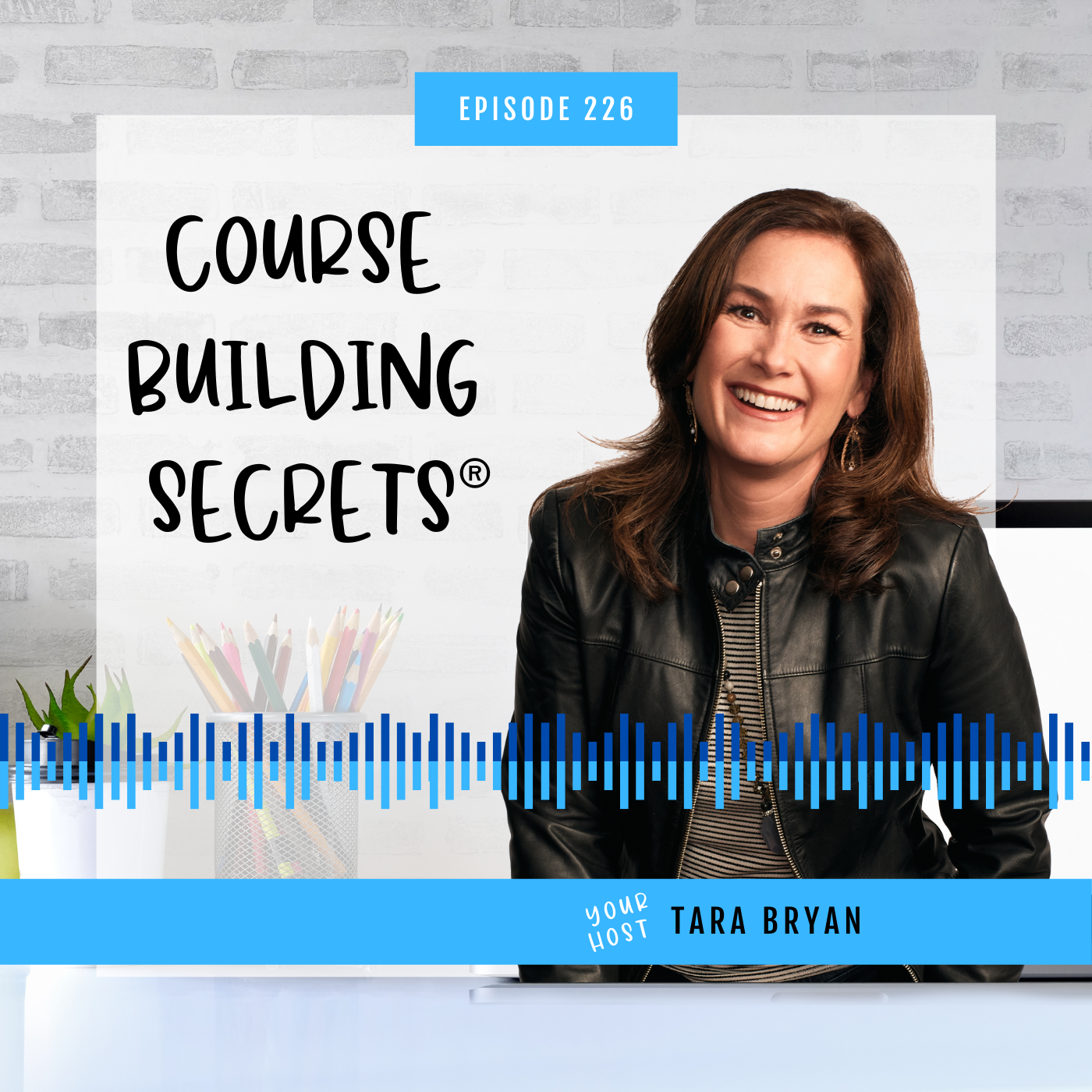 Just how important is identifying your ideal client/avatar? In this episode Tara shares questions to ask yourself when thinking about who your avatar is and provides some telltale clues that you are not working with the right clients. Your avatar is about more than just attracting the clients who has the problem you solve, it’s also about matching your energy and excitement to work on their project!

My name is Tara Bryan. I help business owners break into the next level of success by packaging their expertise into an online course experience. It's my passion to help to find the fastest path to results to create a greater impact and income for you and your tribe.

Check out my free Step-by-Step guide to building your online course. In it are the top steps and questions you need to ask before you get started. Check it out here: https://goto.taralbryan.com/step-by-step-guide

This group is 100% focused on support, knowledge and example sharing, and building a community of online course builders who are passionate about building awesome learning experiences.

In this community, we are passionate about building learning experiences that produce results for our learners. We do that by building engaging, motivating, gamified, and learner-centered courses. We come up with ideas and strategies to ensure that our learners can thrive and succeed in our product.

Here are two ways we can help you grow and scale your online course business:

1. NEED TO CREATE YOUR ONLINE COURSE?

Join LEARN ACADEMY - Learn Academy is the best Done-with-you Step-by-step Implementation program that will help you create, sell, and launch your online course.

2. ALREADY HAVE A COURSE?

Join THE COURSE EDIT - The Course Edit is a program that will assess your current online course to take it to the next level. Maybe you have a course that isn't selling or one that people aren't completing (therefore not remaining customers) then it is time for THE COURSE EDIT.

If you would like to get automatic updates of new podcast episodes, you can subscribe to the podcast on Apple Podcasts or Stitcher. You can also subscribe in your favorite podcast app.

Hey, everybody, it's Tara, Bryan, and you are listening to the course building secrets podcast. Whether you're a coach or a CEO, the success of your team and clients is based on your ability to deliver a consistent experience and guide them on the fastest path to results. This podcast will give you practical real life tips that you can use today to build your online experiences that get results and create raving fans. Why? So you can monetize your expertise and serve more people without adding more time or team to your business. If you're looking to uncover your million dollar framework, package it and use it to scale you're in the right place. Let's dive in. Hey, everybody, welcome to course building secrets.

In today's episode, I want to talk about the secret of finding the perfect avatar for you. So let's break that down a little bit. One of my mentors has been saying something recently, that's just so powerful. And it just hit me like a ton of bricks the other day. And she said, You know what, I don't want to work with people who aren't as excited to work with work on what they you know, want to work on, or their energy doesn't match or exceed her energy. And I thought that was so powerful when she said that just think about that for a minute, is she does not want to work with people whose energy doesn't meet or exceed her own energy. And I take that to mean, like, you can't care more about helping your person get the results that you know, will help them more than they do. And I think that there's a lot of times when people sign up for things, because they think that it's going to give them an easy and easy button and easy way to actually get the result. It's funny, I had another mentor once say, you know, once somebody buys something, they think that they've already solved their problem, because they just had to buy the thing that will teach them how to solve the problem. And so they in their mind, kind of, sort of subconsciously, they feel like because they've purchased it, the project problem is now solved. And so, you know, they tend to not show up, or they show up kind of periodically, or, you know, they show up really well at the beginning. And then they get stuck in the dip, which we talk a lot about is, you know, once it gets hard once the learning happens, then there's actually more effort than is involved. But at the end of the day, as a coach, as a teacher, as a you know, someone who is, you know, leading somebody to, on a path that gives them a result, his that you can't care more about getting them results and they care themselves. And it's such a such a powerful statement. I'm in a in the process right now of working on a project. And it just sort of a reminder to me of my perfect avatar is someone who has skin in the game is somebody who gets excited about, you know, seeing that whatever, whatever the skill gap is a behavior gap, whatever it is that they're struggling with, in order to do and they you know, they're, they're motivated to do something different. They want to learn something different. They have skin in the game, right? So so so often. You know, we say what people pay they pay attention? Well, the problem with working with some of the the kind of more traditional agency clients we have is many times the person we're working with isn't actually the one with the skin in the game, right? They're not actually the business owner, they're not actually the ones who are trying to solve a problem. They are the subject matter experts, the ones who know, in and out how to do the thing. And so we're working with them to define, you know, what needs to be taught what stories and scenarios and decision making models exist or should exist to help people really get, you know, to achieve what they're trying to achieve. And so, when we're working with these subject matter experts, a lot of times they've got a million other things going on. And they've just been sort of assigned, I say in air quotes assigned to the project. So their heart's not in the game. They they just don't doesn't really matter to them. There's nothing that it's actually doing that will help them personally. And that's a hard place to be in when you're trying to do a project is it again, you can't care more about the project than the person who is building the project or is responsible for the project. And so this poses a serious problem when you're working on, you know, one of these projects, and at the end of the day that there's, you know, a lot of those that come up, but when, when you are looking at how to grow and scale your business, when you're looking at how to start your own thing and who you want to work with, it's really making that shift of looking at. Okay, so who are the people that I want to spend my time with? Who are the people that I want to be showing up every day? And how do I want to show up? And how do I want them to show up and really being clear with that, because there are so many different ways that you can monetize your expertise, that you can take a part of what you do, or really look at something that you're super interested in. But if it's not a match with the people that you're gonna be working with, and you're asking me a drudge, and you're not gonna want to work with them, and they cancel meetings, or they don't show up to meetings, or they don't really care. Like, that's a really hard position to be in. And so, you know, yes, your expertise is important. Yes, the way that you think about how you want to package what you're doing is super important. But just as important is really being clear about who you want to work with and who you don't want to work with. And it's such a good reminder, the other day to kind of go back into this activity and say, you know, wait

a minute, like, am I working with the right people? Why does this feel hard? Why does this feel like, you know, it's sort of a slog, and it feels like that, because they don't have skin in the game, there isn't anything that that's driving them to be excited about project. And so, you know, it's just a good reminder of looking at that, and really being clear about who and why you want to be working with with who you're working with. So that is my crumbling secret for today, make sure that you really are thinking about audience and who you want to work with each and every day. And and just know that it should be easy. And it should be that they're either matching or exceeding your energy and your ability to help them. So if you're feeling like you're stuck in that place, it's time to reevaluate who you're working with, and really determine if you've sort of gone down the wrong path in terms of of helping your people. So there you go, there is my secret for today.