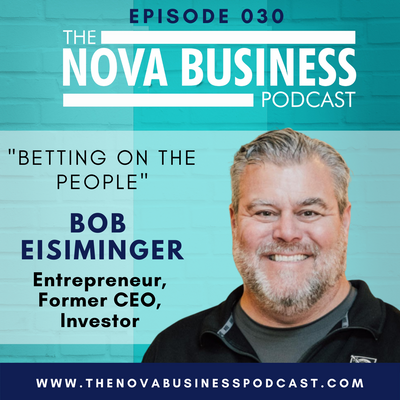 Betting on the People with Bob Eisiminger, Entrepreneur, CEO, and Investor

Bob Eisiminger founded Knight Point Systems, an IT service provider to U.S. government agencies, in 2005, after graduating from the U.S. Military Academy at West Point, a stint in the United States Army as an officer and a turn at a Fortune 500 company as a corporate executive. In the Army, Bob learned how to lead people. By the time he sold Knight Point 15 years later, for $250 million dollars, he had about 500 employees invested in the Knight Point culture and embedded in various U.S. Department of Defense and Department of Homeland Security projects, often at the highest clearance levels.

Since the acquisition of Knight Point, Bob spends his time giving back to the entrepreneurial community. He serves on the Board of Experts for The Birthing of Giants Fellowship Program, an educational program for owners of growing companies. He also serves on the Board for Patriapps Software Venture Studio, diversitypop, EXB solutions, Inc, Reservoire Health, SignId, Johnny Mac Soldiers Fund, and serves as a co-chair for the Veterans and Military Business Council for the Northern Virginia Chamber of Commerce.

Highlights of this episode: