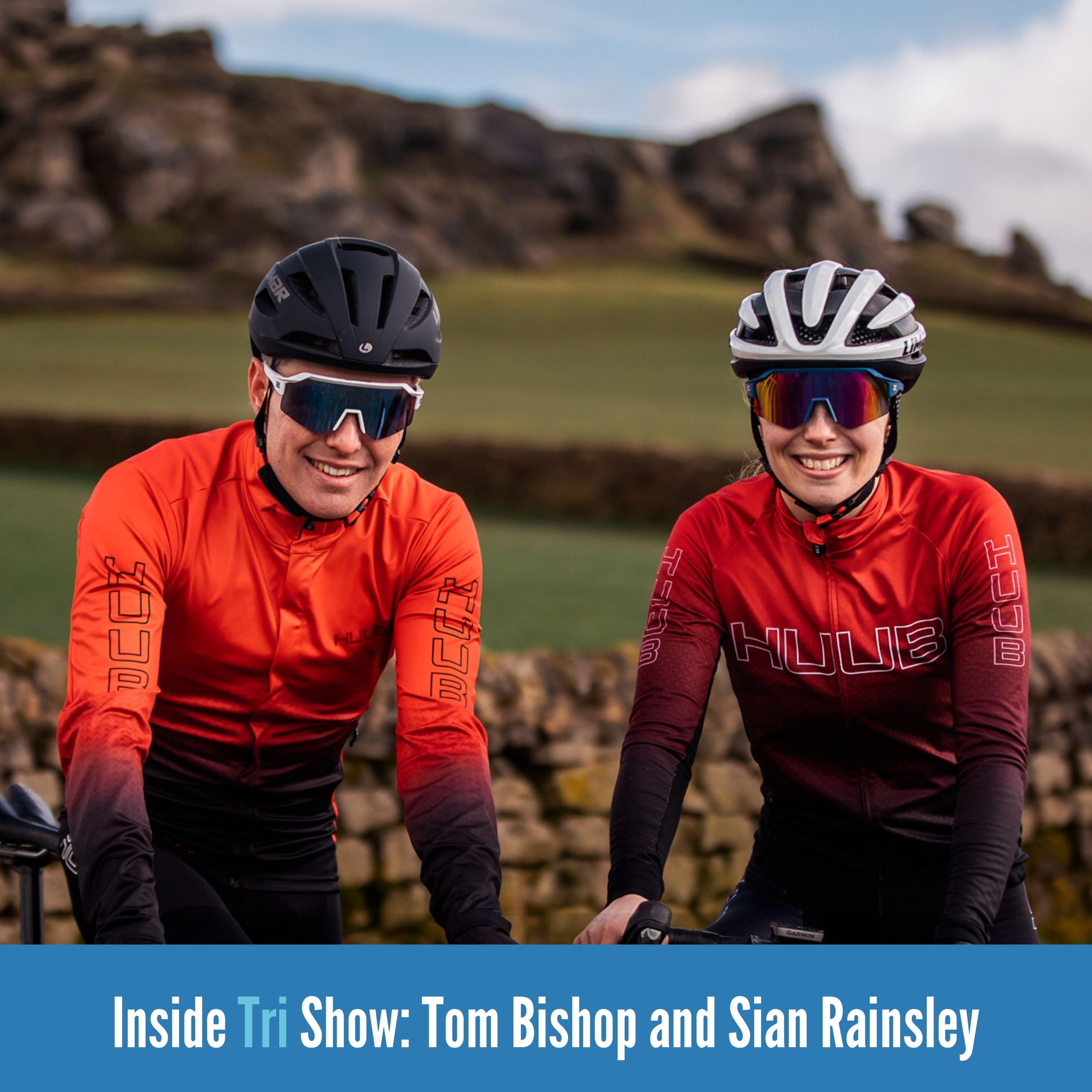 British Triathletes Tom Bishop and Sian Rainsley join us in conversation this week. It's been nothing short of a rollercoaster for the couple over the last few seasons. Back in 2018, Tom was travelling to Australia to represent Team England at the Commonwealth Games, while girlfriend Sian was being diagnosed with Crohn's disease. Roll on to 2021, Sian made her senior debut on the World Triathlon Circuit while Tom was trying to play catch up for Olympic qualification and faced a mighty task of doing 5 races across 5 weeks around the World. The pair are grounded, fun and full of love and belief for each other in and out of the sport that brought them together.

06:30 The stress that quarantine has added to life on the WTCS circuit and why even couples have to quarantine separately.

12:25 Sian and Tom talk about Sian making her senior debut at WTCS Leeds in 2021 'I still can't believe it to be honest, but it is possible and it can happen. I was running along next to Non Stanford and Katie Zaferes. It's really surreal to be doing that with people I've been looking up to in triathlon'

17:20 Tom talks about the 'mighty' task he had on his hands to try to qualify a place for Great Britain at the Olympics. He faced 5 races in 5 weeks around the world. "It was a pretty mighty task and at the end of the day it didn't happen. We didn't make a proper plan and in hindsight if I had nailed two, I probably would have scored the points needed. I think for the next cycle, British Triathlon and us athletes will have learnt from this. I wish we had thought about it more before we started. I didn't really cope with all of the pressure. I felt like it was all on me. I wasn't even guaranteed to be selected for the Olympics at the end of it all and by the end of it all, I didn't really care. At the time, I just wanted it over and done with.

25:30 Sian: You always watch the Olympics and see the amazing stories of people who make it, but there are always athletes that don't make it and it's really tough to watch.

27:30 Sian talks about being in the sport for 17 years, after doing her first triathlon at the age of 8 and representing Team GB at the Youth Olympics in 2014. Having done those things for so long, I have drawn on those experiences a lot to motivate myself to know that I can do these things.

30:15 Sian talks about the impact that a diagnosis of Crohn's Disease has had on her as an elite sportsperson 'I was losing weight, I started to get belly cramps, I started to lose blood. I was embarrassed about having toilet issues, I was only 18. I had never heard of it, I had no idea what it was and how it would affect my life until I had loads of flare ups. I was too tired to even get to the bathroom, but 80% of people with Crohn's disease need surgery at some point. 2018 was the first time I doubted if I would be able to do elite sport and have Crohn's Disease at the same time. I am just grabbing every opportunity at the moment. If it wasn't for Tom, I wouldn't be doing triathlon. He kept the belief in me, even when I got funding cut.

38:00 Tom talks about how he dealt with Sian's diagnosis in 2018, when he was flying out to the Commonwealth Games with Team England. Everyone has their own issues, but Sian is the closest person and it has inspired me to get through my rough patch. Hopefully any little story can help someone else.

40:30 I love the sport, so there is no doubt that I would never do it, whether as an elite or just being with friends. At one point when I was doubting if I could do it or not, I felt like I was doing it for a team of people with Crohn's. The Dr initially said you can't do sport, especially triathlon, an endurance sport with Crohn's disease. I'm better to be consistent over months and months rather than do one run if my tummy is feeling bad. It's been a big learning curve.

43:15 Sian was recently diagnosed with a heart issue

46:00 Tom talks about how he has picked himself up after missing out on Olympic qualification, including doing a training block with Vicky Holland. How he's keen to do long course triathlon, but hasn't ruled out another bid for the Olympics if British Triathlon are keen to still fund him.

49:00 Tom and Sian's ideal weekend - which may or may not involve sleeping in a tent. We're not the biggest party animals.

53:40 Why Tom loves to escape with a good epic fantasy book

Sign up to be a vino buddy or a training buddy on Patreon and get your hands on the latest patrons-only exclusive episode, a brilliant behind the scenes audio diary of my recent Lands End-John O'Groats cycling adventure that you won't hear elsewhere.

Sponsors of the show

Head over to Helen's website to find out more about her