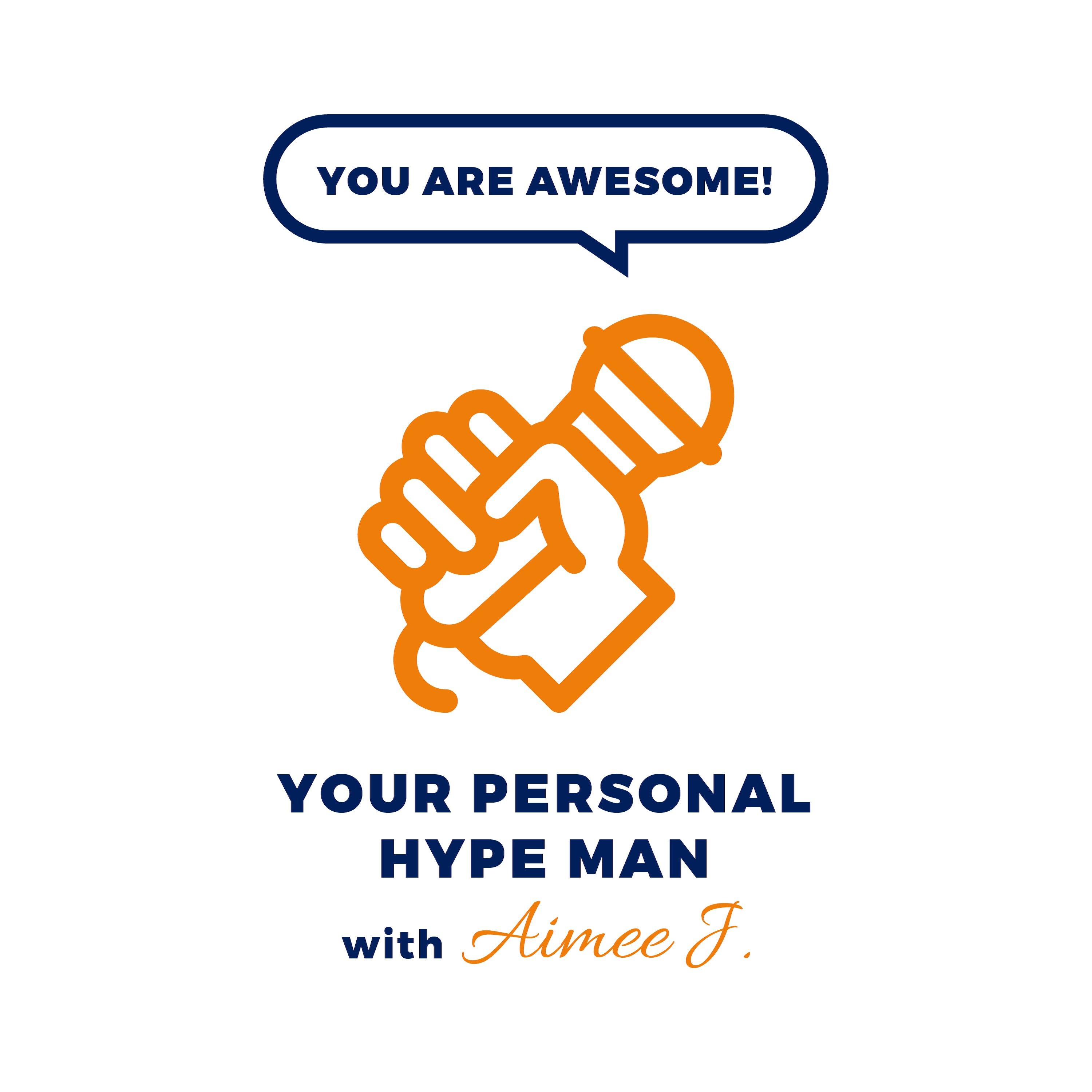 Note from Aimee J.: You will do amazing today!

Action: In the mirror, tell yourself at least one affirmation. You are welcome to use the ones below. Say as many affirmations as you need.

You are Cool.
You are Amazing.
You are Whip Smart.
You are a Champion.

You are Awesome.
You are Loved.
You are Needed. And most importantly,
YOU ARE ENOUGH.

Hey fam, it's your girl, Aimee J., Your personal hype man and friend here today on this Monday, January 13th, 2020. I am recovering from a devastating weekend for my Ravens. Um, that was rough. Still still recovering from that. Hope you're having, you had a better weekend than I. um, but I hope you had a great weekend. I hope you had a chance to get some work done. But I also hope you had a chance to get some rest. Cause like I said, it's important to do both. You gotta be persistent to get the work done, but you gotta find that balance so that you can rest and recharge cause that's just as important as getting the work done. A tired dream chaser is not a very productive dream chaser. So what are you guys trying to do today? The thing I want to talk about mostly is about trying.

There was a famous quote, it's still famous today by Yoda and he said it to Luke Skywalker in Empire Strikes Back, which was in 1980 but it lasts for years. And we, he goes to Luke who's trying to raise his X-wing, I think from the swamp if I'm remembering correctly. And Luke's like, all right, I'll try and years like, "No. Do or do not. There is no try. Terrible accent. But the concept was either do it or you don't do it because trying isn't going to get it done. And for years I will all about that quote. It was like, bam, look at that quote. That is a powerful quote. Do or do not. Don't just try. And it's only in my recent years that I've realized that that is actually not a very good thing to tell people. It's, it's not guys, because what you gotta do is you gotta try, you gotta try and you gotta fail.

Those are the two things you need to do in order to succeed, which seems counter intuitive and seems backwards, but in reality, that's how people get better. That's how people make progress. That's how we have so many amazing inventions in the world today. It's because people tried something, failed, learned, and did better. Right? It's, it's counterintuitive. It's weird. It's like, wait, what are you saying you don't do? I want you to do, but I want you to know that if you don't fail, if you don't make mistakes, that's where the learning truly is. That's where you're actually going to grow, is in the mistakes, is in the efforts you're making and the mistake that you made and kind of learning from it. So the key is if you make a mistake, if you try and you fail, but you don't learn from that failure, that's not progress. So let's make sure we keep that clear. I want you to try, I want you to fail. But the key point I'm trying to make is that you have to learn from the failures. You have to learn from the mistakes. Now, I don't want you to go to school or your job and be like, uh, my girl, Aimee, Aimee J., She, she's that host of the Chasing Dreams podcast and that Your Personal Hype Man podcast, she said it was okay for me to fail.

Don't get me in trouble. The truth is I want you to succeed. But when you fail, if you fail, when you fail, when you fail, because you should be failing and making mistakes, you gotta learn from it. Okay? So, yes, I want you to do best. I was a straight a student, uh, as was expected of Indians and family members. And you know, we have high standards. That's okay, that's fine. I, I got all A's in elementary, middle school, high school, valedictorian. I didn't truly feel like I started to learn until college when I did not get all A's. When I did struggle, and it was in the struggle that I did better, it was in the struggle that I really actually understood the material. So it's okay, get your A's, but know that it's okay to make mistakes. It's okay to fail. I'm telling you that now.

I'm giving you permission now to understand that, accept that. So you can still get straight A's and make mistakes. It's possible. But I want you to understand mostly, maybe, maybe that wasn't so clear in the beginning, um, that I want you to fail. I want you to fail. I want you to do your best, try your best and if you fail, that's okay. Learn from it and keep on going cause it's in that learning. It's in that growth that you will do and grow even better. That's why it's just as important when you work to rest because when you rest, your body recharges and you just do better. You keep going and cause you can bounce back stronger than ever. That's what happens when you make a mistake. You learn from it. You bounce back further than before.

Trust me guys, that's, that's how it works. You are still amazing. You are still cool. You are still whip smart, but it's okay if you fail. It's okay if you fall down, it's okay if you make a mistake. It is not the end of the world despite what you may feel in that moment, despite the severity of your feelings, the world is ending. My grades are over. The semester is coming to an end. Woe is me feeling that you are feeling which you are. You are. You've earned that feeling, feel that feeling, but know that it will be okay. You will be okay. And then I want you to give yourself five minutes with that feeling. It may take some people a little bit longer, but try to minimize it and then dust yourself off. Pick yourself back up again and say, Hey, what can I learn from that?

What can I do to do better? And that's how you will learn to be a better person, a better student, a better employee, a better family member, right? This is how we grow by trying and failing, making mistakes and learning from them. So keep that in mind as you go about this Monday cause you're going to feel like you're making a lot of mistakes, especially on a Monday. A lot of people feel like Monday is the worst day. That's okay. I you're going to kick it on Tuesday because you're going to learn for what happened on Monday. That's how it works. As don't let yourself sit down in that failure, in that mistake, in that problem that you're having. You will grow and you will rise from it because you are a champion. You are amazing. You are awesome, you are loved. And you were needed. And most importantly, guys, regardless of what you may hear from teachers, bullies, people you don't even know you are enough as you are, regardless of anything, I put no limitations on that. You are enough. That's brainpower, that's physical abilities, that's athleticism. All of that. You are enough. Remember that? Okay. All right. Until next time, when we check back in tomorrow on Tuesday, of course. Remember, Don't stop, Keep Chasing.