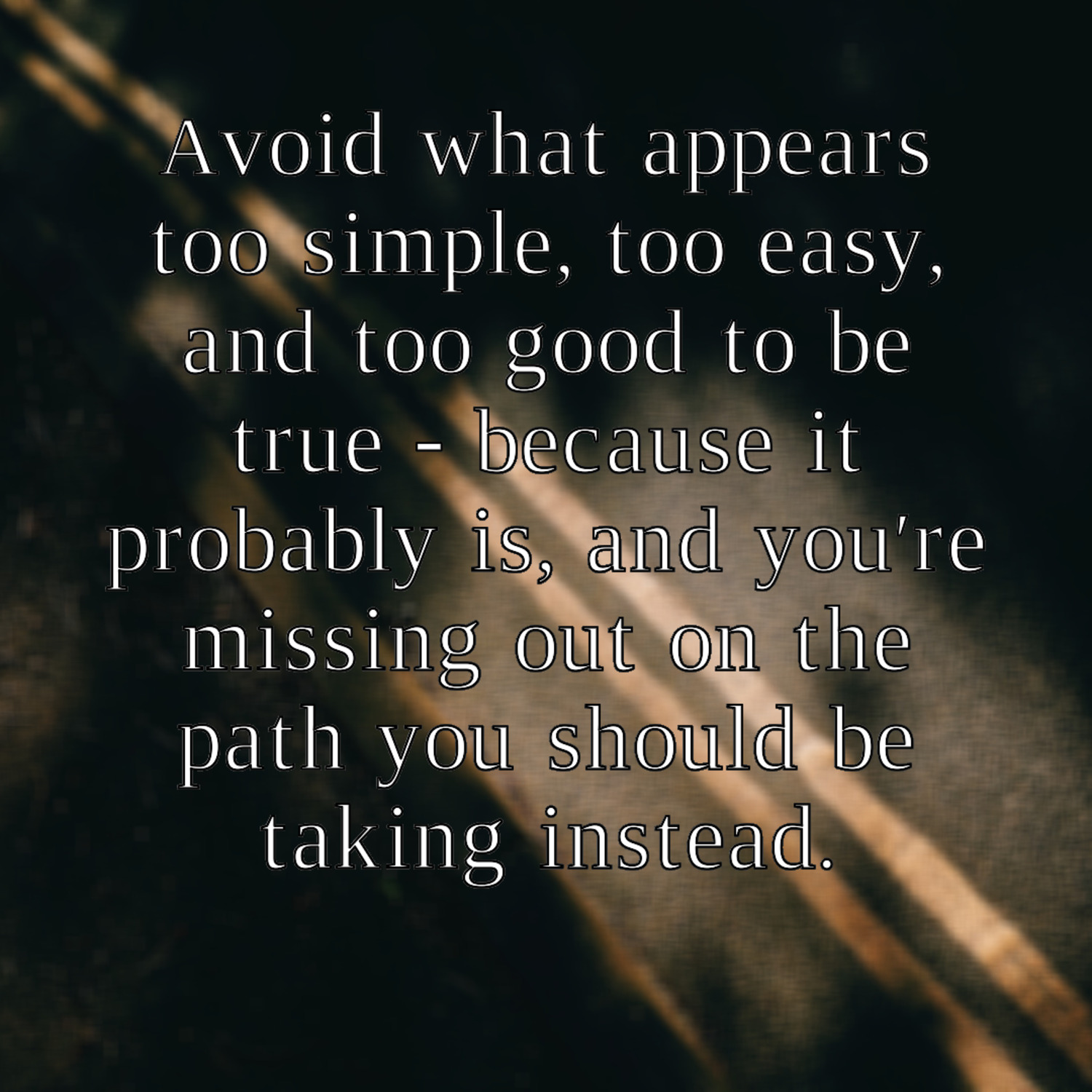 Does something appear too easy? It's too good to be true. Avoid it. Seek resistance, because that's a sign that you are on the right path. On a daily basis, we are faced with two choices: the easy thing and the right thing. We usually don't even realize we have a choice, but when you start to honestly categorize your choices, you might discover that your instinct to avoid resistance is self-sabotage.

Use to exercise more self-discipline and willpower.

Too often, we get sucked into the path of least resistance. We might even perform mental gymnastics to convince ourselves that this path is the one we should be walking. In either case, we are stuck walking down a path that leads away from our best interests. We're a lazy species that doesn't want to do anymore than what is necessary at the present moment. Predictably, this can work against us.

This mental model is about avoiding what appears too simple, too easy, and too good to be true - because it probably is, and you're missing out on the path you should be taking instead. There is an easy path and a right path - often you'll find yourself on the right path if you just avoid the path of least resistance. Seek the resistance; seek the hardship, and rest assured that you are on the correct path. Chances are avoiding struggle will just lead you away from what you want.

Unfortunately, doing the right thing usually means doing the hard thing; actually, they are almost always the exact same thing, and that's what this mental model really recognizes. If what you want appears too easy to achieve, you're probably missing something. There are just no shortcuts to the real rewards in life, and you have to engage in a bit of resistance. In a sense, easy things are usually just hard things, only cut short.

People drift toward the path of least resistance in the most unconscious of ways, from doing one fewer exercise at the gym to eating one more bite of ice cream, taking the elevator instead of the stairs, and buying the regular version instead of the diet version of anything. We don't even realize that there are two paths, much less that we are taking the lazy one.

So here's the crux of this mental model: you need to be able to consciously answer whether you are doing that - or doing what's right. Which path are you on?

When you can't confidently say that you're doing the right thing, you're not - and then you are forced to compare the difference between right and easy. If you're not doing what you should be, then anything else out of your mouth is an excuse, plain and simple. Anything that comes after the word "but�" or "it's different because�" or "well�" is the innate recognition that resistance is ahead. That's a good thing.

Instead of beating around the bush and soothing your ego, try stating out loud the two paths you are considering and honestly categorize your actions into right or easy.

And when you feel that you are engaging in the easy path of least resistance, ask yourself what the honest reason is. Hint: it's not "it's too hot outside" or "it's too late"; it's actually "I'm not going to run today because I'm lazy and have issues with self-discipline and commitment." In effect, you become brutally honest and confrontational with yourself, which is sometimes the only way to get a message across.

You should always want to answer that you're doing what's right, and that will frequently mean that you have to make a little extra effort. But when you do it consistently, that extra effort pays off. For instance, the magic of compound interest from bank savings accounts. Tiny choices over extended periods of time are what underlie true success and progress.

Doing the right thing may feel like the harder route in the moment, but when you do it consistently, it winds up being the most efficient route to accomplishing your goals.

Inherent in this calculus is the fact that you must actually know what you are aiming towards - what actions are right for what goal? Only when you know the end goal can you say that an action takes you further or closer to it. The end portion of this mental model, how to ensure that you are avoiding the path of least resistance, works best if you have a clear future you can envision. Otherwise, what is all the struggle and resistance for?

So the next time you are battling with yourself between the path of least resistance and the correct path, stop and ask yourself how you will feel 10 minutes, 10 hours, and 10 days from now.

This may not seem so powerful, but it's effective because it forces you to think about your future self and to see how your current path (whichever it is) is going to affect yourself in the future - for better or worse. A lot of times, we may knowingly give in to the temptation of the path of least resistance, but that's not enough to stop us from doing it because we don't have any connection to the consequences. Thinking in terms of 10/10/10 quickly creates that connection.

Why time intervals of 10 minutes, hours, and days? Because that helps you realize how short-term the pleasure/comfort of the path of least resistance is relative to its long-term consequences. At 10 minutes, you might be feeling good, with perhaps just the initial bit of shame creeping in. After 10 hours, you'll feel mostly shame and regret. Ten days later, you'll probably be consumed by regret, having realized some of the negative consequences that your decision or action has had on your pursuit of your long-term goals. You get nothing out of it, and in some cases, you backslide.

For example, imagine that you apply this rule when deciding whether or not to skip a workout to go to dinner with coworkers. If you've just begun exercising and haven't built it into a consistent habit yet, your decision to skip a single workout might increase the odds of skipping future workouts or stopping working out altogether.

How will you feel in 10 minutes, hours, and days? Ten minutes - good, with a slight tinge of regret, as you can still taste the lasagna or ice cream. The pleasure is still tangible. Ten hours - almost entirely regret, as the pleasure is gone and fleeting, and your diet has been soundly broken. Ten days - 100% regret, because the broken discipline is now completely meaningless and but a faint memory. The lasagna does not have a lasting benefit, but it does have a lasting cost. Resistance lies between you and what you want.