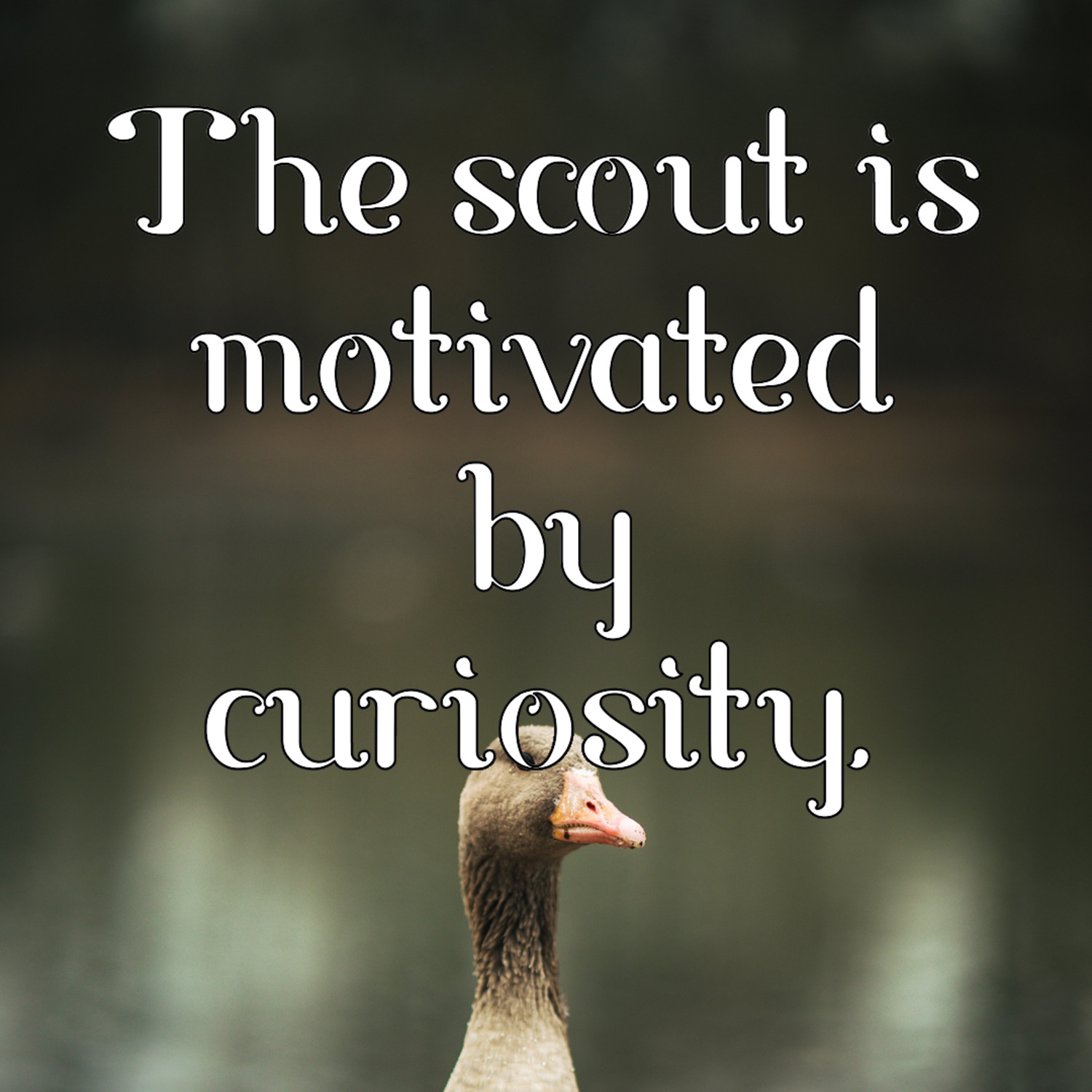 Our attitude toward new information determines the extent of our learning. If we are “soldiers” who seek only to defend the beliefs we already have, we don’t grow or learn. But as “scouts” we learn for its own sake, reaching out in curiosity and receptivity. We aren’t afraid of the truth; instead we actively seek to learn from it and improve ourselves.

We all have a native perspective, a set of assumptions, a non-neutral attitude and even unconscious bias. Yet, we all believe that we are the unbiased ones who look at everything objectively and without letting our emotions cloud our judgement. We only develop as people when we become conscious of these fallacies—and conscious of our ability to choose something different.

Part of critical thinking is deliberately seeking out evidence against our chosen beliefs, rather than only seeking data that confirms them. Look for reputable sources and inform yourself about various things that are important to you. Inevitably, you’ll discover that some of your beliefs were mistaken or simply naïve, but that is a surefire sign of growth as well.

If all else fails, abide by Darwin’s Golden Rule of trying to poke holes in your own argument. After all, it’s better if you do it rather than someone else.

The other approach in Galef’s theory is the “scout,” the person who is motivated by a desire to understand, learn and gain insight into the truth. This mindset is more flexible, since it is fundamentally curious and receptive. It’s asking a question of the surrounding environment, rather than marching in with a forceful statement. This aligns neatly with the growth mindset we’ve explored—new information is not seen as a threat, challenge or competition, but something new and interesting to explore.

This is the mindset that would have allowed the person in our first example to notice the obvious fact of them not getting better on their new diet. Instead of all the mental gymnastics needed to see this information and still cling to the chosen model, the person could become curious: if it’s not a food allergy, then what else could it be? They might have carried on their search and found the true solution much sooner.

The presence of an excellent woman driver might alert someone with a “scout” mindset to think again about their own assumptions and conclusions. They might decide, “Maybe this idea I have about women isn’t really true after all.” More likely, they wouldn’t have believed in such a stereotype in the first place.

Whatever your orientation to reality itself, it’s decidedly not neutral. We all like to think of ourselves as somehow centered, with our opinions and values being the obvious norm, while everyone else has biases, beliefs, preconceptions and so on. But of course, we have them, too.

At the root of either mindset is not rational thought, but emotion. The soldier approach is driven by fear and mistrust of difference and novelty. This is a basic emotional temperament that craves stability and fears the unknown. This is the person who gravitates toward tradition. Testing one’s beliefs is seen as weak.

The scout is motivated by curiosity—the world feels like a more friendly and interesting place to them, so they don’t respond with defensiveness, but interest. This is the person who gravitates toward novelty and innovation. Testing one’s beliefs is seen as a strength.

To find out which mindset you may lean toward, ask yourself how you view changing your mind. Do you think that you’ve “won” an argument if you haven’t budged at all and convinced the other person you’re right? Do you think that admitting you were wrong is embarrassing?

When you meet someone with a different opinion than you, do you ask questions and become curious, or do you silently gear up for mental battle, thinking of all the ways you could prove them wrong? How do you see engagement with foreign ideas and the people that hold them? Are conversations a chance to learn, to bond socially, or to prove your superiority?

Many people think that being argumentative makes them intellectually formidable—in reality, the opposite is true.

Imagine two people get into a heated political discussion. They both see the discussion as an opportunity to prove which “team” is right, and to boast their superior knowledge and get the other to surrender. It’s a matter of protecting their mutual egos—their entire identity and self-worth rests on whether they’re perceived as right, i.e. better.

Can you imagine anything less productive, and less likely to lead to learning, understanding and insight for either person?

The first thing to do is acknowledge that being neutral or objective is an illusion: we all have a subjective perspective we’re inhabiting, conscious or unconscious. Our culture is set up to reward the soldier mindset, unfortunately. Whether it’s in business, politics, academics or science, so many of us go through the motions of learning or asking questions, when in reality we are only seeking to confirm what we already believe to be true.

Though most of us would like to be the scout, we’re probably guilty of being the soldier more often than not. After all, isn’t it only our ego’s desire to belong to the “right” team (i.e. the scout) that makes us believe we’re already functioning that way? Maybe you read the above section and thought, “Well, yes, sounds like a good idea—all those other people who are soldiers should clearly be more like me, a natural scout.”

Becoming aware of and detaching from our bias is not easy, but it is simple. First, uncover why you inhabit this mindset. In fact, just noticing and admitting that you have this mindset in the first place gets you halfway there. Wanting to defend ourselves often comes from an unconscious belief that disagreement is the same as attack, and that there can only be one right person, so it had better be you!

Where did you first learn that being wrong was a weakness or flaw? Where did you learn that the point of mastery and understanding was not for its own sake, but as a way to bolster the ego?

Try to detach your own identity and sense of worth from your beliefs. If you catch yourself in the soldier mindset, remind yourself that there is no “war,” metaphorically speaking. Try some of the following affirmations to gently challenge and remove this mindset when you notice it crop up:

“It’s OK for me and others to change our minds.”

“My beliefs are provisional, and I am always open to learning more.”

“I have value and worth as a human being, no matter whether I’m right or wrong.”

“I learn for the joy of learning.”

“I do not have to compete, convince, or prove anything to anyone.”

Of course, sometimes your beliefs are worth holding on to. Sometimes, it’s worthwhile to be able to defend and justify your position, not to prove your superiority to your opponent, but to clarify for yourself why you hold the ideas you do.

We can reduce the effect of this mental block by carefully considering our own perspectives as rationally and objectively as possible. If we have to see anything as a threat to defend against, it can’t hurt to imagine our own ignorance, bias and irrationality as the real “enemy.” Can we transform our soldier mindset into one where we are fully on guard for closed-mindedness in ourselves?

A great way to do this practically is to search out the opposite to our usual impulse—instead of finding reasons to support what we already think, can we actively seek out evidence to disprove it? Though this may feel uncomfortable at first, you’ll ultimately be a better-informed person who will see the gray areas in everything that appeared black and white. Nobody likes discovering that they are wrong about something, but you can transform your closed-mindedness about foreign ideas to a perspective which refuses to consider that there is only one possible explanation for any phenomena. Through this mindset, you avoid the binary thought process where one party is either right or wrong. Instead, we all simply look at things differently in equally valid ways.

If all else fails, try to think like Charles Darwin, as he had a particular view on stepping outside of his own perspective. The very basic guideline of Darwin’s golden rule was to be more than just open to contradicting or opposing ideas—indeed, Darwin gave them his fullest attention:

“I had, also, during many years, followed a golden rule, namely, that whenever a published fact, a new observation or thought came across me, which was opposed to my general results, to make a memorandum of it without fail and at once; for I had found by experience that such facts and thoughts were far more apt to escape from memory than favorable ones.”

Darwin completely immersed himself in evidence or explanations that went against his findings because he was aware that the human mind is inclined to dispose of those contrary views. If he didn’t investigate them as fully as he could, he’d be likely to forget them, and that would create mental dishonesty. Darwin knew that his own instinctual thinking could be a hindrance to finding the truth as much as it could help, and he established a way to ensure he wasn’t missing out on any information.

Darwin handled all this conflicting information responsibly. He genuinely considered material that might have disproved his assertions and took pains to fully absorb every single scenario, anomaly, and exception to his theories. He didn’t filter out information that didn’t support his beliefs; he was utterly immune to confirmation bias. More than anything else, Darwin didn’t want to be careless in finding the truth—he knew that a half-cocked assertion solely intended to persuade others without much thought was intellectually dishonest. Questioning his own beliefs required more time and effort on his part, but he was committed.

Uniquely, Darwin forces a dialogue of skepticism back to himself instead of to others in defensiveness. To himself, he would direct questions such as, “What do you know?” “Are you sure?” “Why are you sure?” “How can it be proved?” “What potential errors could you have made?” “Where is this conflicting view coming from and why?” Darwin accurately realized that if you hold the belief that everyone else is wrong, you’re in trouble.