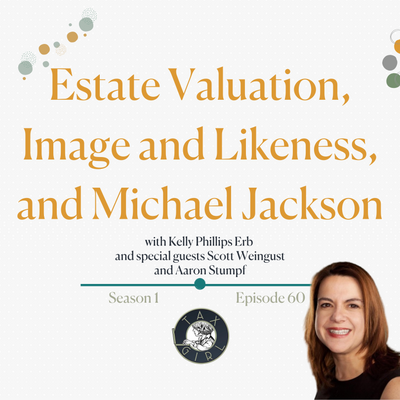 60: How Intellectual Property is Valued After Death: The Michael Jackson Estate Case

Michael Jackson’s death on June 25th 2009 shocked the world. And the legal drama that followed shocked many tax attorneys. At the time of his death, Jackson was clearly worth millions, but the exact value of his estate was unclear. The matter eventually ended up in court with a ruling that Michael Jackson’s image and likeness, at the time of his death, were worth considerably less than the IRS estimated. How this happened, and what it means for other estates, became a big question mark in the tax world.

Calculating the value of someone’s intellectual property at the time of their death is a complex process. Why was Michael Jackson’s image and likeness valued so much lower than the IRS estimated?

On today’s episode of the Taxgirl podcast, Kelly is joined by Scott Weingust and Aaron Stumpf from Stout to talk about intellectual property and estate valuation upon death. Stout is a global investment bank and advisory firm specializing in corporate finance, valuation, financial disputes, and investigations. Scott is the leader of Intellectual Property Valuation Practice at Stout; he has over 20 years of experience providing consulting services to corporations, law firms, universities, and investment firms. Aaron is a Managing Director in the Valuation Advisory Group. Aaron co-leads Stout’s trust and estate valuation practice.

Listen to Kelly, Scott, and Aaron talk about intellectual property and taxes: