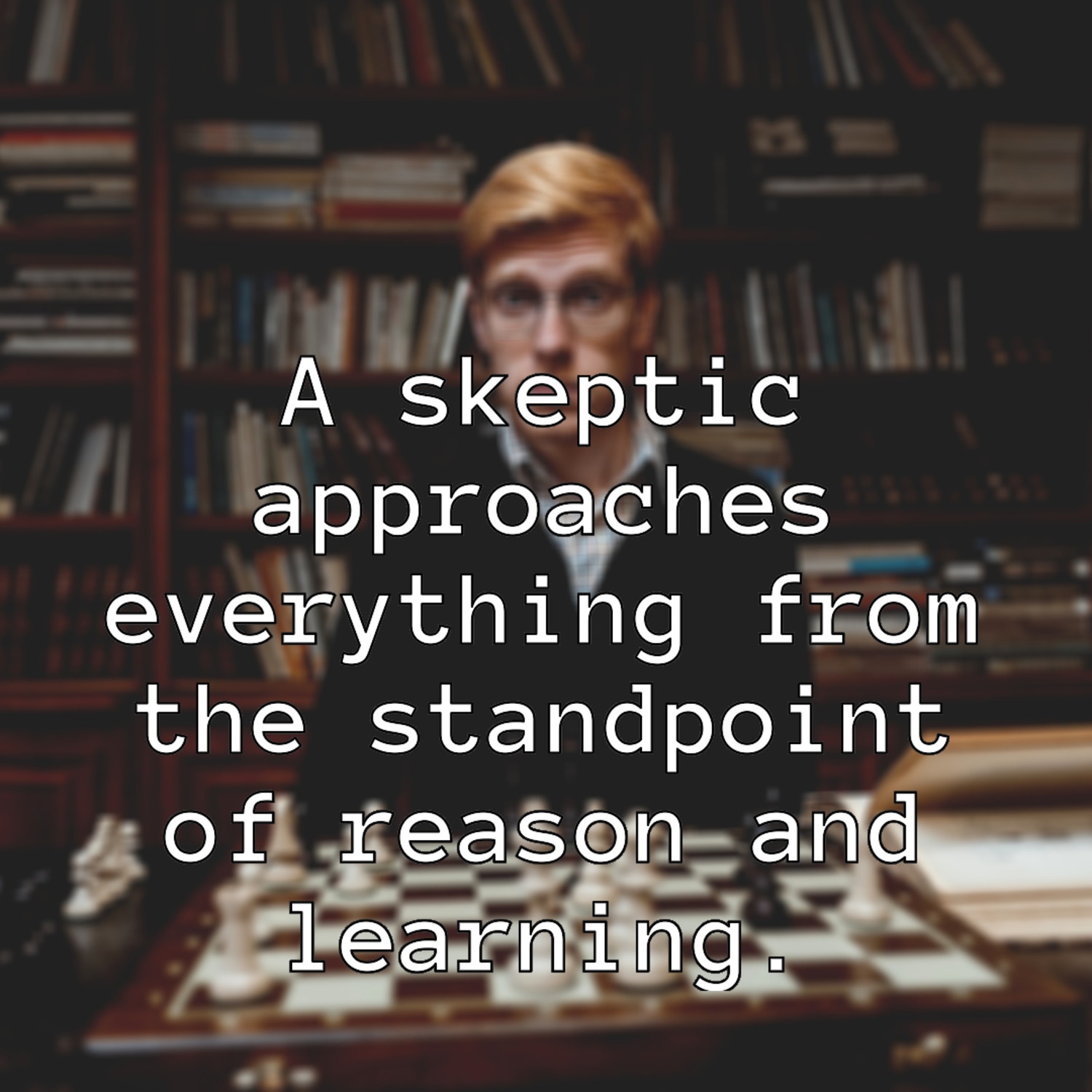 One methodical way to seek truth and simulate curiosity is by embracing skepticism. No, it’s not about being cynical or simply refusing to believe what people tell you. Rather, it’s refusing to blindly believe what people tell you and requiring evidence and facts. In this way, a skeptic is quite similar to a scientist utilizing the scientific method. No answer is required here, and only understanding is sought. Skepticism requires slowing down your thoughts and thinking like a scientist.

Skepticism is a model for understanding what you’re looking at and gaining a truthful view of it. The word “skepticism” is frequently misunderstood, sometimes labeled an undesirable trait. The thesaurus will tell you that this word is synonymous with mistrust, suspicion or pessimism – but ask any philosopher, and they will tell you that nothing could be further from the truth!

When someone says they’re skeptical about a certain thing, they might ruffle the feathers of somebody else who thinks they’re just letting their negativity get in the way. Why’d they have to ruin all the fun with their skepticism?

Some people use the word “skeptical” interchangeably with the word “cynical”—but there’s a world of difference between the two. Except for both trains of thought involving a measure of disbelief, they couldn’t be more different.

The skeptics belonged to an ancient Greek school of philosophy, although the general principles were practiced worldwide throughout history. The classical skeptics actively questioned the possibility of knowledge or argued that judgment should be completely suspended if there is insufficient evidence to warrant belief. While it might get pretty tiresome to believe that truth is not ultimately knowable except in probabilistic terms, modern skeptics make a good argument for not taking anything for granted, knowledge-wise.

A skeptic approaches everything from the standpoint of reason and learning; they’re open-minded but picky about requiring evidence. They don’t believe something unless they have a reason to.

However, this is different from broadly mistrusting any viewpoint you don’t already agree with, or just any viewpoint in general. Sometimes, people may claim to be skeptics but are merely describing a stubborn closed-mindedness – they’re firm and fixed in their beliefs. They believe everything in life will progress in a certain way, and there’s no point in questioning it. Even hard, verifiable evidence may not sway their beliefs. For example, we all know that the media can lie and that falsehoods can and do appear in the news. But consider these three different attitudes:

1. “You still read the paper? Pshh, I don’t see the point. It’s all lies and propaganda. You can’t trust a single word…”

2. “I read the BBC because they’re trustworthy and neutral. They’re the gold standard. They wouldn’t lie.”

3. “You shouldn’t believe everything you read. Could this news article be fair and balanced? Maybe. Maybe not. I haven’t got enough evidence yet to decide either way.”

Can you see the difference? Blandly announcing that nothing can be known or trusted is mere nihilism. This is rebelling for the sake of rebelling, and has nothing to do with independent thought. Making fixed, sweeping claims about the nature of things (whether these sweeping claims are flattering or not-so-flattering) speaks to a closed-mindedness that is the opposite of real skepticism. The third attitude is the skeptical one –merely the dignity of not making any claims, or believing anyone else’s claims until there is sufficient evidence to do so. This, naturally, ties into the ability to tolerate uncertainty and to temper the ego enough to keep saying, “I don’t know.”

Cynicism is dangerous because it implies no answers to anything in life. A cynic believes that matters have already been determined, and there’s no point in challenging them. Cynicism shuts down investigation and discourages interest. That’s dangerous because it leads to hopelessness. Skepticism, on the other hand, has a positive goal of discovering real truth (incidentally, the ancient Greek school of the Cynics practiced a style of philosophy very aligned with the themes of independent thought explored in this book, and completely disconnected from the modern usage of the term “cynical”).

A skeptic seeks to find irrefutable truth, or as close as they can get to it. This, by definition, involves going beneath the surface and determining what’s really in front of you. The word itself derives from the Greek skeptikos, which translates to “inquiring” or “looking around.” A skeptic’s mission is to question. A skeptic’s mind is trained to look for the basic facts, impartial to any bias or agenda. This is probably an unnatural way for most of us to be thinking, but it can shed light on how much you leave uncovered.

Skeptics don’t settle for having blind faith or wishing truth into existence. They don’t want to burst anyone’s bubble, but neither do they want to fill someone up with false confidence. They just want to understand, and they do not discriminate between the conclusions that might surface. They are the impartial judge of a criminal court, with similar standards and adherence to intellectual honesty. They see things in only black and white, as you also must. There can be no wiggle room.

Skeptics operate only on evidence. They must have proof that the assertions of other people work or are completely true. They can’t accept facts simply at face value. Before a skeptic can decide something’s real, they need to see confirmation in the form of data or consistently repeated results. The mere fact that someone just “heard somebody say something” is nowhere close to being evidence. That’s merely an anecdote, and the plural of anecdotes is also not evidence.

A healthy skeptic always considers and questions the source of certain information—and no matter how high up or acclaimed that source may be, they’re still subject to being confirmed by evidence. A source may have impeccable credentials, a gleaming reputation, and considerable fame or authority. All of that’s great. They still need to have evidence.

Skepticism will feel more satisfying the more you use it, and you’ll be less prone to flawed thinking, counterfeit facts, and weak arguments. Just make sure you don’t become an annoying pedant with this newfound power of scrutiny you’ve found. Skepticism is a mindset of withholding judgment until you are sure the truth is plain to see.

This pursuit of truth and reality might echo something you’re already familiar with, the scientific method. Indeed, skeptics resemble scientists more than anything else for their strict standards of proof. The scientific method is a time-proven process for gathering information scientists have used for centuries to test their theories. It works by scrutinizing observations and assumptions to ensure that the truth is discovered. For instance, if someone observes that it becomes colder at night, there would be no way of proving this truth unless data was collected during daytime and nighttime and compared.

The scientific method is generally considered to consist of five stages: asking a question, constructing a hypothesis, testing by experimentation, analysis of results, and forming a conclusion. In fact, this process exactly mirrors skepticism. An assertion without evidence or fact is essentially an opinion, and certainly nothing close to the truth.

Thus, to put everyday statements to the test, you’re going to have to conduct an experiment, collect data, and analyze results empirically. Skepticism leads you down a line of inquiry and discovery that cuts out the assumptions and opens doors of truth.

Now that we’ve established that “skepticism” isn’t a dirty word and is a hallmark of thinking smarter, how does one actually use it to evaluate the relative truthfulness of a claim? Here’s a skeletal guideline for approaching a topic with appropriate skepticism.

1. Intake the statement. Fully absorb the meaning and implications of the claim after it’s been made. Even if it sounds ridiculous to you at first hearing, at least pretend that it’s a serious and meaningful belief. Give your source the benefit of the doubt for this one brief step. This will allow you to give it the attention it deserves, if even just to poke holes in it. When we dismiss, we don’t pay attention.

2. Question the source. Consider the viability of the source of information. Then, consider the possible intentions of such a source. If it’s a publication, media outlet, or website, gauge its reputation and agenda—there are plenty of legitimate-looking sources that aren’t above distorting or stretching the truth to serve an agenda. If it’s a friend, relative, or acquaintance, ask them to tell you where they got the information (without devolving into an intense argument, if possible).

3. Search for supporting arguments or information. If a certain claim has “gone public,” there’s probably ample information supporting it that you can easily find on the web. Find the arguments in favor of the statement you’re researching—and again, question the sources as you go.

4. Search for opposing arguments or information. Repeat Step 3, but this time, look for statements or sources that either deny or criticize the information you’re looking up. Be aware of the possibility of confirmation bias on your part while doing this step—don’t discount opposing views or gravitate toward unreliable sources because they’ll back up your own beliefs. Give yourself a higher standard of truth.

5. Question your findings logically. Here’s where you put together what you’ve learned and weigh the likelihood of the statement being true or false. I like to write things down as a way of thinking through them, and you can do that by listing pros and cons, making a mind map, or drafting a persuasive essay for yourself. Or you can simply do some heavy contemplation in your head without writing anything down. Remember, you seek evidence, not certainty, and you don’t need an explicit answer. You just want to look beneath the surface. Wherever the evidence points is where you look.

If you find the original claim viable, then you agree. If you’ve found too much doubt or contradictory evidence, you disagree. If you’ve seen compelling evidence for both sides and can’t reconcile it right now, you can decide to leave it for the time being. Again, what’s important is truth, not certainty.