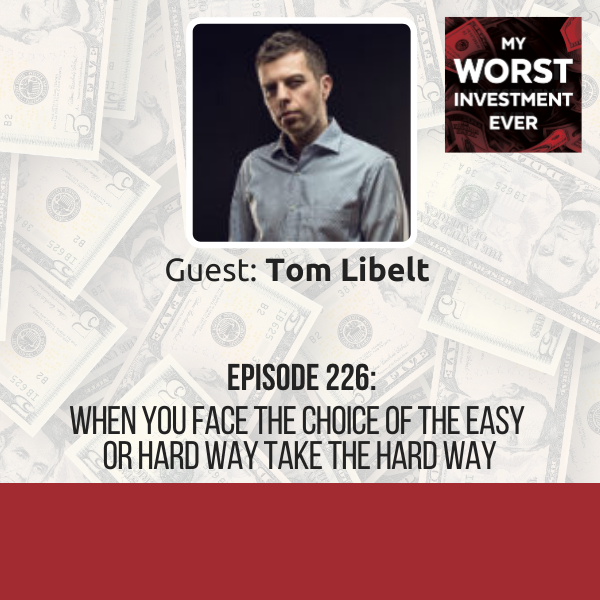 Tom Libelt was born in Communist Poland and escaped to the US when he was 11 in the early ’90s. At 9, his father sold products at soccer stadiums in Eastern Europe, where he learned the hard way how to sell and how not to be hustled. He is hyper-focused on helping course creators market their online courses.

“Becoming a big fish in a smaller pond often is not only more profitable but will make your life easier.”

In his early 30s, Tom was running a reasonably successful SEO business. Back then, it was easy to rank on Google using what people today consider as blackhat methods. Tom would pay bloggers to get backlinks.

Tom had a team of 14 writers at the time, spending a lot of time, money, and effort getting into these blogs. Their goal was to get 50 backlinks pointing to a website every month to keep it ranking higher. While he had other tactics, this model worked the best.

After riding the wave for a long while, Google smartened up and was out for businesses doing shady stuff. Google destroyed almost all the blackhat networks. They looked at IP addresses and de-indexed them. Thousands of SEO companies were pretty much back to square one.

Tom now had a massive team of writers with nowhere to put the blog posts.

Tom learned about Amazon Kindle (e-books) at around this time and decided to see if he could make a business out of it. He had a ready team of writers anyway.

Tom told his team to pick topics of their choice, do keyword research and write up short books of about 30 to 40 pages, then use images to fill in some gaps and just publish them on Kindle. Competition at the time was little and so getting into Kindle was pretty easy.

About three months later, Tom’s writers broke even. So he thought this could work. Tom would now sit down with the team for two days, go over hundreds of topics and then pick the best to run with.

Eventually, the team was pumping out about 250 books per month, and for about four or five years, the money coming in was quite good.

Making money on Kindle was pretty straightforward. You’d get 70% of sales made, and $1 for every book rented. Tom’s business was making a killing by pushing rentals.

One day, out of the blues, Kindle killed the rental payment model. Now they would focus on pages read.

After the new payment model, Tom turned to a blackhat marketing tactic where he told people in the introduction of the books to skip to the end to get the “Golden Nugget” and then come back to the beginning of the book. So everyone would just go straight up to the end of the book, and Tom would get paid. While this still got him money, it just wasn’t as lucrative.

Closing the doors for good

Tom’s marketing tactic worked for a while then one day, without any notice, his Kindle accounts got shut down. There was no explanation given, and he was not allowed to appeal the decision. Since Tom had no control over Kindle, there was nothing much he could do than accept the loss and move on.

Tom had invested so much in the Kindle business just to have it go away overnight simply because his business model relied entirely on someone else’s business.

Taking the easier way out may bear you fruit, but it won’t last long. You are better off working hard so that you can reap the fruits longer.

Have control over your business

Have your own business structure. Don’t depend on other people’s infrastructure. Always ask yourself where the control is? Who owns the control in the situation? If you don’t have control, then it’s not a good business idea.

Build your own assets

You have to build your assets instead of relying on others. It’s hard to do this, but it makes your business idea more solid.

Know when you are riding a wave

There are many ways to make money, and sometimes you will be taken advantage of, but always know when you’re riding a wave so that when it comes crashing, you’re not caught off guard.

Keep your team small, if possible. Keep your schedule open because if you don’t have time to think and analyze your business, it won’t grow. Lastly, specialize.

Tom’s number one goal for the next 12 months is to look at opportunities in the online course creation spaces so that he can diversify. For instance, he’s looking at how he can make more info products.

“The best opportunities are something that you either kind of figure out by yourself by looking at what’s working, or just kind of come to you during your thinking process.”