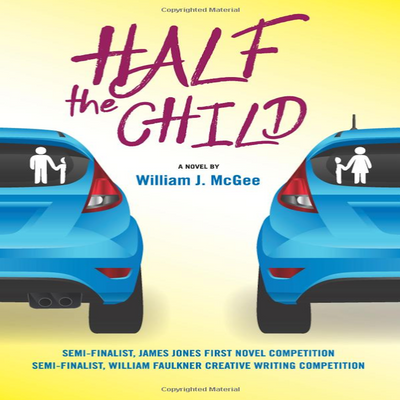 "Half the Child" takes place over four consecutive summers in the lives of Michael Mullen and his son Benjamin, who ages from 2 to 5. Mike is an air traffic controller at New York City's LaGuardia Airport who also is pursuing a graduate degree in Psychology. He and Ben's mother are about to divorce, and the legal stakes keep dramatically increasing, ultimately culminating in abduction. The battle for Ben negatively affects Mike's career, education, financial state, friendships, romantic life, physical health, and emotional well-being. Refusing to relinquish his parental rights leads Mike to personal bankruptcy, temporary homelessness, potentially catastrophic errors at work, and suicidal depression. Yet he steadfastly refuses to consider a life that consists of living apart from his son. With courts continually ruling against Ben's father, it remains uncertain if their bond will survive. Ultimately, they will write their own love story.

William J. McGee was born in New York City and received an MFA in Fiction from Columbia University. Among other pursuits, he teaches undergraduate and graduate Creative Writing; represents travelers as a consumer advocate in Washington; and is an award-winning investigative journalist and columnist. McGee is the former Editor-in-Chief of Consumer Reports Travel Letter and also worked in airline flight operations management and served in the U.S. Air Force Auxiliary. He is the author of Attention All Passengers, a nonfiction exposé of the airline industry, and is developing AirFear, a scripted television drama. McGee lives in Connecticut and is, of course, at work on another novel. He is also a father.