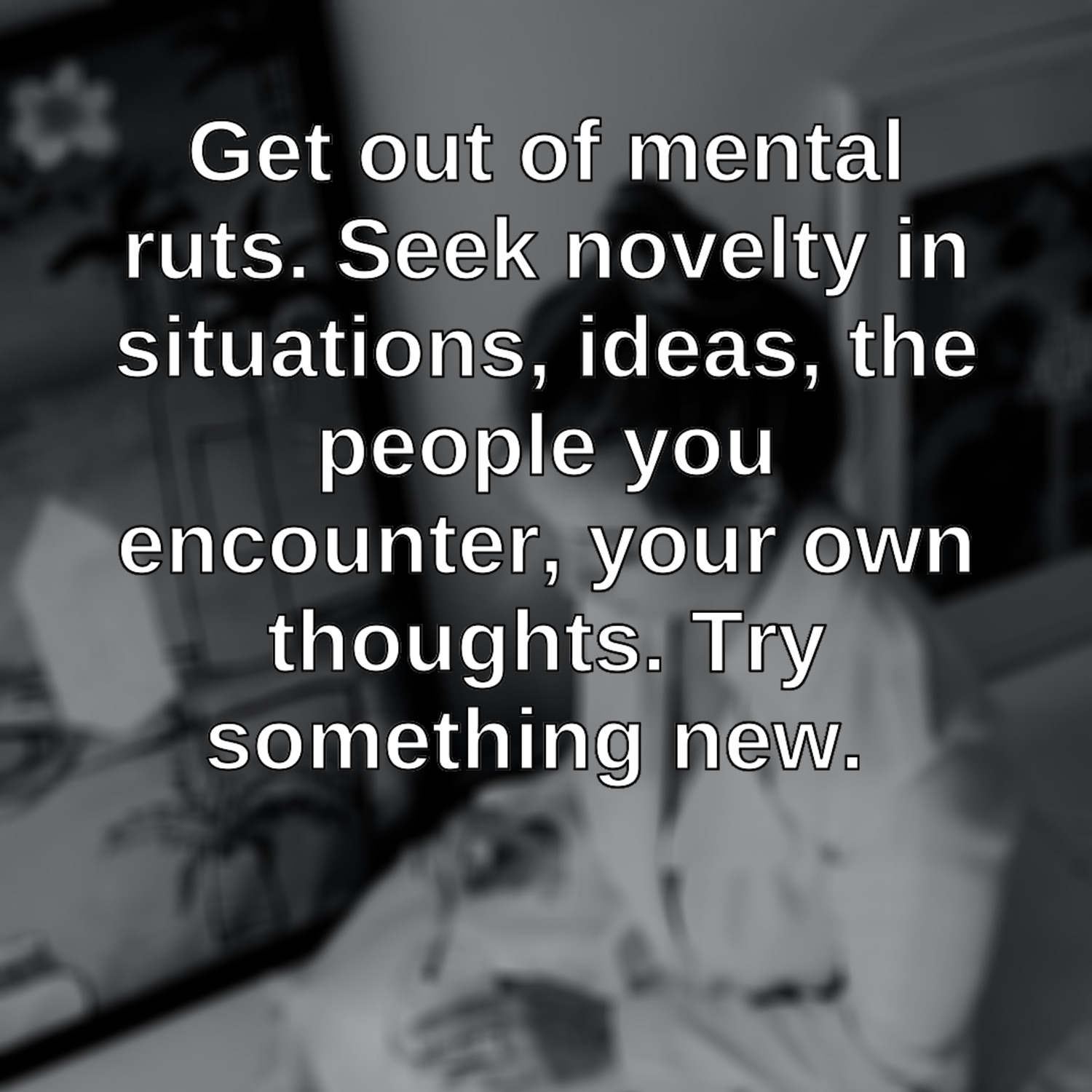 The first piece of true brain training is to embrace novelty, challenge, and everything that makes you struggle a bit mentally. Thats when actual neural growth is occurring—just like the gym and physical fitness, if its not a little painful, then its probably not doing much for your goals. This is the real foundation of improving your mental performance through neuroplasticity. A simple way to think about this is: more exposure and more experience equals more brain cells and neural connections. This can be gained in easy ways, such as changing your daily routines or rituals, and simply stepping out of your comfort zone to seek more instances of unfamiliarity.

It’s one thing to know how to respond to a stimulus you’ve seen a million times before, but how do you react to novel problems, or ones that take a shape you’ve never encountered? How flexible and creative are you in adapting ideas, experimenting, truly observing what you see around you and looking for patterns anew? This is what it means to live and think at the periphery of your abilities. While of course there’s nothing wrong with training for a specific skill, there may ultimately be more to gain when you train your total ability to think, independent of the topic or the form your challenges take.

The kittens, it turned out, couldn’t recognize objects or patterns of the kind that they weren’t exposed to in their sealed- off environment. The kittens raised in the horizontal chambers could not see vertically aligned objects; they kept bumping into chair legs and weren’t responsive when researchers thrust a finger toward them in a vertical direction.

Meanwhile, the vertical cats couldn’t find an appropriate place to lie down and take a nap, since they had no ability to recognize horizontal planes.

Some of the kittens in the experiment successfully rehabilitated in a few weeks, but many never did. Their primary visual cortexes had been engineered so strongly in one angle that they were effectively blind to whatever lines they weren’t exposed to during those five months.

red their brain structures in: 2000

The bus drivers, on the other hand, only had to drive a couple of pre-planned routes every day with little or no variation. They only needed to memorize a few turns and perhaps not even the street names. They could do this through visual memory alone, recognizing buildings or landmarks.

However many people are on the bus makes no difference to the bus driver, as they already know the path and endpoint.

However, being a taxi driver is somewhat like playing Russian Roulette—you never know what you’re going to get or how to get there. (Okay, maybe that’s more Forrest Gump than Russian Roulette.) How do you practically develop a taxi driver’s brain in the real world? Firstly, get out of mental ruts. Seek novelty in situations, ideas, the people you encounter, your own thoughts. Try something new.

Keep fresh eyes on old problems and ask different questions. Take a different approach from what you normally would.

Seek the harder, more difficult route instead of the tried and true. Eat something different; walk a different path; ask different questions.

Secondly, challenge yourself. You could play it safe and continually work at a comfortable level, and your brain will happily comply—but it’s only when you push yourself a little further that you can get an idea of what you’re really capable of.

Pushing yourself out of your comfort zone is like a thrilling sprint across the beach at max speed—it pushes your body to its limits, and it’s utterly exhilarating. In the same way, be curious about how far your brain can go. Don’t be too quick to be satisfied with the status quo. Become curious; rebellious, even.

It’s this curiosity that, when at its height, is almost indistinguishable from intellectual excitement, from peak performance, from joy. Being in this state of mind is a deeply creative experience. It’s experiencing the wonderful unknown. Scientists and artists have this in common: they are frequently in close contact with the mysterious, and are trying their best to engage it, to speak about it, to represent it, to grasp it. Creativity feeds on itself: when we can think out of the box and look at things in novel, unexpected ways, we often solve previously tricky problems, or open up entirely new avenues of thought.

What this means practically is that when you’re using your brain, remember to give it the opportunity to be limber, so it can do what it does best. Take breaks. Unhook from intense goal-driven activity for a while to just stare out the window, to doodle, to reset or laugh or do something else for a moment. Give space for the unexpected to step in and change things for you. Take the problem apart in a different way. Creative thinking is the subject of more and more neuroscience research, but for the moment we can take advice from those who practice it routinely: artists and other creatives.

If you’re feeling blocked or mentally stale and slow, step back. Flex your brain a bit and make some open space to allow a fresh idea to enter in. Draw the problem instead of writing it. Sit somewhere else and daydream for a moment. Ask someone’s opinion on the matter. Brainstorm in the shower. Have a sense of humor in completely rearranging the components of the problem in front of you, or indulge a wild fantasy in which your most fundamental assumptions about your situation are up for question (hint: they often really are.) Creativity often comes down to the unexpected, the strange, the new. So, naturally, you won’t encounter it doing the same old thing you always do! There are no rules in being creative—after all, part of the fun is making them up yourself. And remember, boosting your fluid intelligence this way means that it’s transferrable. Were you encouraged to play an instrument at school? Many parents do this in the belief that learning to play will indirectly help other areas of a child’s life. And they’re right.